Is called Pearland, but has nothing to do with Pears

I live in a town in Massachusetts known as the "Furniture Capital of New England".
Even though all of my town's furniture factories have left a long, long time ago.
I guess the most impressive thing you can say about my town is that we have a somewhat famous haunted house. It's called the S.K. Pierce Mansion.

My town held the record for the most bars per person. It was like 190 bars for less than. 20k people. Needless to say my town is a bunch of drinks. Glad I moved.
Gentleman in the streets.....

My town is home to the ruins of a Roman fort, it was the royal residence of King Osric of Deira, has a church that has arguably been around in one form or another since the 7th century, our local newspaper is the oldest provincial newspaper in the UK, and the town claims to be the birthplace of the lifeboat. It's also the birthplace of Sir Ridley Scott and Eric Idle.
Creator of comics. Artist for hire. But mostly just a tea drinking code monkey who certainly doesn't have any plans involving a death ray.

How the hell is the population that small? That is actually mind-blowing.... Like, wtf everywhere in the states has millions in it as far as I know, and San Francisco is a notable place for sure. How did that happen, wtf is going on? 900k? Calgary has more freaking people. The sky is falling!
RAISE THE BLACK

My home town is famous for the legendary battle fought in 1066 by William of Normandy Vs Harold Godwinson. It has a reputation for witchcraft and smuggling between the 16th-18th century. It also holds a yearly pirate festival.

The town I live in now is known as the birthplace of Hans Christian Andersen. It also holds a yearly Festival of art and culture and also a Harry Potter weekend where loads of folk cosplay as students and wizards from the books.
Last edited: Nov 12, 2019
<3 In memoriam. Frostheart. Gone, but never forgotten. <3

My town is Melbourne, second largest city in Australia. It had about 4 million people. It was founded in 1835 by squatters from Tasmania, was the largest city in Australia for a long time, was the richest city in the British Empire and was the original Australian capital. It has a reputation for being strongly progressive and is often regarded as Australia's cultural capital.
"Ravo is fair and balanced, the most watched and most trusted!" ~ Fox News

Connor J. Coyote said:
Goodness.... it looks like the house from "Psycho".

I dunno.... it's something about New England in particular.... with big, old drafty mansions.... with squeeking doors, and crackling wood on staircases.... with maybe even a few apparitions that go bump in the night.
Click to expand...

I think the Salem Witch Trials have something to do with that...
"Ravo is fair and balanced, the most watched and most trusted!" ~ Fox News

Creep of the week

The town I grew up in was near a dog biscuit factory. You could smell it for miles.
https://www.furaffinity.net/user/ghostbird/

I live so far out in the middle of nowhere I've genuinely forgotten to lock the door to my house a couple times and it's been okay when I got home
Twitch: DrBossRabbit. I'm always doing something stupid... Or playing Mega Man again.

BossRabbit said:
I live so far out in the middle of nowhere I've genuinely forgotten to lock the door to my house a couple times and it's been okay when I got home
Click to expand...

Same. I hardly ever have to lock my cars.
I am perpetual.
I keep the country clean.
I

My town has a skatepark, a historical district, the Daisy BB gun museum, several coffee shops, antique stores, and a Latino district that sells food products you can't find anywhere else.

Literally translating to "Pig Hill," my town basically only exists because of I. K. Brunel and his railway works, which were briefly one of the biggest in the world. But that all vanished in the 80's so this town really has no point to existing, and you can tell. There's really not much here except for the "Magic Roundabout" and a leisure center which one of the royals said was one of the ugliest buildings they've ever seen. Our town center is dominated by buildings that could pass as coming from the Soviet Union and overall it's just a bit of a shithole.

As they say; At least we're not Slough.
"Thanks to the Scamps Conventions of 0.28.181.40d and 0.31.03, the number of Thermonuclear Catsplosions has been drastically reduced."

My town has a statue of a foot...god knows why.

angeliimp said:
My town has a statue of a foot...god knows why.
Click to expand...

rekcerW said:
How the hell is the population that small? That is actually mind-blowing.... Like, wtf everywhere in the states has millions in it as far as I know, and San Francisco is a notable place for sure. How did that happen, wtf is going on? 900k? Calgary has more freaking people. The sky is falling!
Click to expand...

Of course, population of NYC: 8.2 million
Population of home State of Wisconsin: 5.2ish million
Not all who wander are lost
Icon by Alicezap..
M

We have this thing... 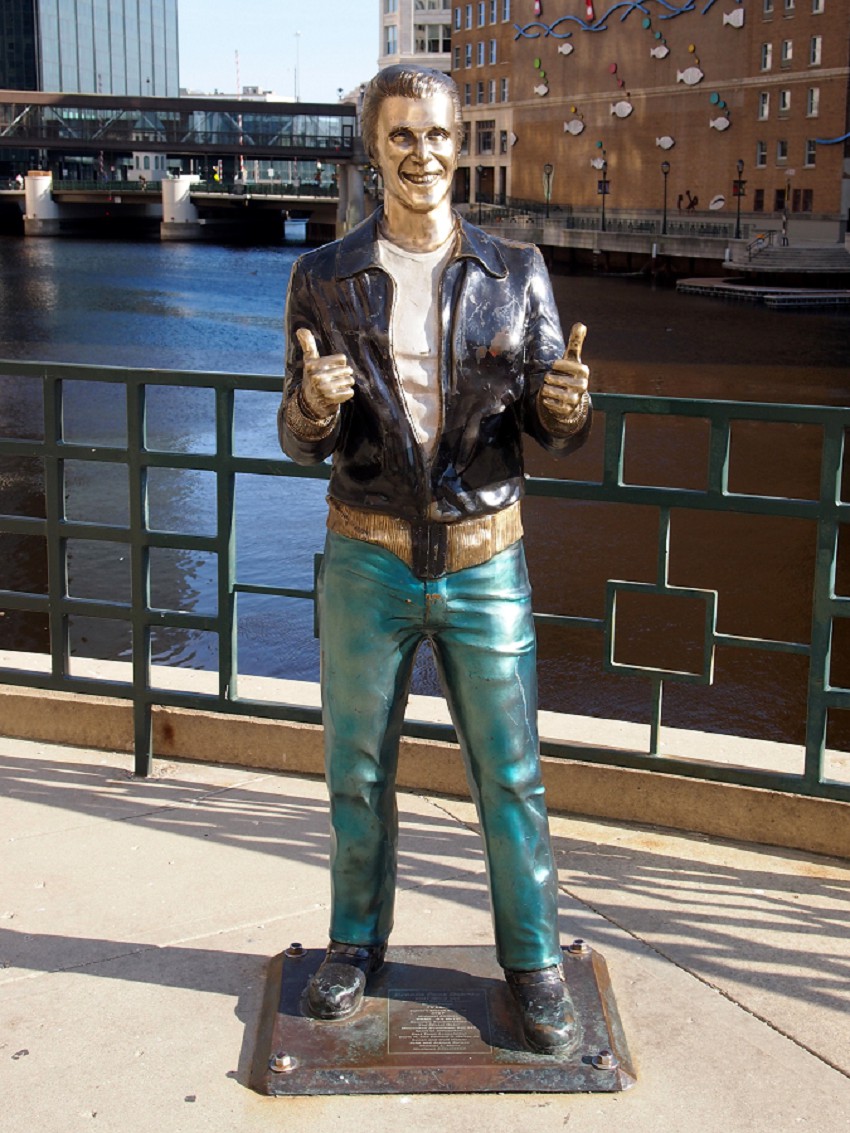 BossRabbit said:
Was Tarantino born there?
Click to expand...


I guess I haven't really thought of populations in places down south, but like SAN-FRAN-FREAKIN-CISCO? That's like one of the few cities I could name off-hand from there, and I'd expect it to be much much bigger. The freaking Golden Gate is there, the same place so many stood and watched as the naval fleet returned from WWII in victory. So cool.
RAISE THE BLACK

My Town is actually part of a city cluster called the Ruhr district formed of several major cities clumped together into one giant urban complex with spanning over 1,646/km2. The whole region is part of germanies industial area where most of the steel, mountain, car and chemical industy is located. In the past it was characterized by coal mineing, and even the last mine closed years ago, it's still a mager part of this regions identity. It's a grey world of concret and steel, with some recreational areas mixed in here and there.

You may say that it's our equivalent to Detroit. The whole region has a high unemployment and crime rate. And my hometown has the sad pole position on the poverty statistics. It got voted to be germanies least livable city for many years. It's a place where you can learn much about life. At the flipside it's a very colourful place where people from many cultures come together. Our local culture was formed and influenced by many groups of immirgants from Poland, Turkey, Greece, Italy, Korea and Eastern Europe that came here during the industial boom in the 70th. We have many cultural events of different artists, and a rich nightlife with every kind of debauchery one could imagine. In the 80th the Rhurgebiet was a mecca for the Gothic and Darkwave scene, and it's still kind of today if you know the right adresses.

Besides this many of germanies big scoccer clubs like Borussia Dortmund, VfL Bochum or Schalke 04 come from here. And it's also the home of the one and only genuine Currywurst, also know as Ruhrpott Carpaccio or Manta plate. The Berliners may tell you otherwise, but don't listen to them they're just jealous. As for my own humble livining place it's located right in the epicenter of this mess and has about 158.000 residents. It's not much here that you'd like to see as a tourist, besides Strünkede Castle maybe. It's a lovely restorated water castle from 1142 AD. There's a small museum inside and people like to merry here for the pictoresque sight. 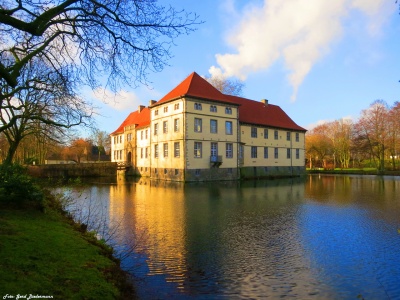 Last edited: Nov 17, 2019
A Friend is someone who likes you, whereas he knows you

Rural diary Town by the Oregon coast. There's these weird quilt square designs on a lot of buildings in town, each one is unique. I think they're supposed to be for tourists to find historical buildings but.. On Les Schwab? Some rando's house? The Mexican food truck? Yeah okay.

Knowing my luck it's probably some bizarre quilt square cult.

The community I currently live in is a decommissioned military base and is so small it doesn't count as its own town. The actual town is a combination of 4 communities put together.
Last edited: Nov 28, 2019
A

My town is a seaside town,and it used to be quite a popular tourist attraction. Unfortunately,the seafront has fallen into slight disrepair,and it looks sort of run down.There are plans to revamp it,but that probably isn't going to happen anytime soon.
A funfair comes there occasionally,though.Its ok.