Any other chibi artists here?

I have been focusing on chibi art every since i first started drawing art as i loved the style so much and even though i have since expanded it is still very strong in my art style and i love to draw it but it is hard to get appropriate criticism for it when people just think its easy when its actually harder than you think. i am not claiming to be a great artist but people often underestimate me unless i draw in a different style and it bugs me.

I was wondering if there are any other chibi artists here who can relate and maybe we can share techniques and ideas? i would love critique from a fellow chibi artist so i really know what they say makes sense ya know? not that i don't appreciate the help people are trying to give me but i think it would really help to get a chibi artists perspective on my art. not sure what art to post here to display my skill so maybe check my furaffinity account and see for yourself?

I agree the chibi art isn't easy, it has it's own rules and ways. I'm not a chibi artist myself, even if I tried my hands at it and still practice it from time to time.
To be honest there's not only chibi that suffers from a kind of under-appreciation. Manga style had (and still have) in France at least, a not so good reputation. Like you want to go to an art school. If you draw mostly in manga style, this will be seen more as an issue than a quality. The western style has a better reputation.

I feel that one of the way to change things is to educate by talking about it. You can also show really good art in that style to people (for manga, usually you show a few Berserk drawing and it's all good) and maybe even let them try their hands at that style. They'll see it's not that easy. One of my past buddy draw chibi and manga style and is now a professional artist. It's especially great in term of marketing material (for example for menu, poster and so on) to convey ideas quickly and has a cute and dynamic feel to a drawing.

I went to look at your gallery and it's cool that you're trying your hands with other styles too, it's what usually helps you to improve. That's the only issue I could see to work in only one style in fact, it's that you can learn so much by trying new styles (but we all have our own ways to learn).

I know you want more critics from other chibi artists, so I'll just say that in my opinion, you should go really further when you apply chibi. Looking at your chibi version of pokemon, there's not that much difference between the two versions. Pokemon are often already on the chibi side so you may want to push really far the differences. I made a quick search on chibi bulbasaur on the net, and for example here: Bulbasaur by demidemi on DeviantArt , you have really big eyes more defined and round than the original version and in a brown color to give a natural and nicer feel that the original red, small mouth, pastel colors that emphasis the cute/baby side and the blush adds to the expression. You may want to try some of that: tweak of colors, head bigger and body smaller, more details on face and less on body, cuter expression, rounder version of body and face.

Last but not least, I think you should post the link to your gallery on your first post. I took the time to check your profile page, but it's easier to have a direct link.

Hope that helps!
My FA Page ❤​

It's not something I do super often, but I enjoy doing it when it's requested of me.
Piggybacking on MissNook's advice, One thing I find is important when drawing chibi is to make sure your proportions highlight the features you want to be prominent. Since you're cramming so much into such a small frame, you wanna make sure you highlight what really makes this character chibi, while minimising the parts which aren't quite as important. If we wanna use that Bulbasaur as an example, not only is the head and bulb the focus of the body (very large), but the other parts of the body are simplified and made even smaller to emphasise just how darn big that head is. I mean, look at those iddy biddy feet, there's next to no detail there. That being said, if you look at the shape of the back leg of the Bulbasaur you drew, that's more of a subtle shape there, which could be simplified.

Hopefully it's okay for me to do this, but: 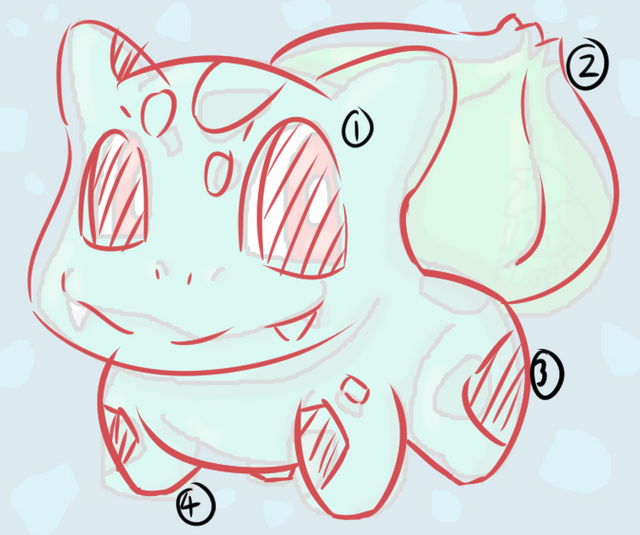 1 - Bigger iris'! You don't want that much white space, fill those bad boys up.
2 - You wanna simplify those shapes, if possible, so maybe go for a rounded, fuller bulb at the back here (I always think convex works better than concave for chibis).
3 - As I mentioned, you wanna make sure the important details come though. The markings on this Bulbasaur are too small, for a chibi picture you wanna make sure these things stand out, be sure to not be too subtle with these things. If it looks like a subtle detail, make it bigger, or remove it.
4 - Since the feet aren't really an important part of Bulbasaur's design, the smaller the better, I'd say your feet are still a touch too big (but removing the toes was a nice touch!)

I'd say you're on the right track! The Pokémon project is a great idea, just keep drawing, and keep asking for feedback, from friends and the public.
Follow feedback, and you will improve.
Last edited: Mar 15, 2020
Check out my work on FurAffinity!
Follow me on Twitter!
Support me on Ko-Fi!

thanks so much this is all very helpful <3 i think i worry too much about upsetting people by removing too much features on the original character. i think i need to experiment with making them simpler. i also see i need more practice with eyes which i will work on. thanks a lot again
Sanity is Overated
Join the crazy train! |\V^w^V/|
Names: FloppyPony, AutisAwsome, KubyPikachuKirby, Clereen/Clereenthepuppy, Flops

FloppyPony said:
thanks so much this is all very helpful <3 i think i worry too much about upsetting people by removing too much features on the original character. i think i need to experiment with making them simpler. i also see i need more practice with eyes which i will work on. thanks a lot again
Click to expand...

Don't worry too much about others when creating art. It's your art you're creating, even if it's a take on someone else's work.
It might be a good idea to buy a sketchbook too, if you have trouble with certain parts like eyes, you can just draw variants of eyes for a few pages until you're confident about putting them on your illustrations.
One thing I didn't ask, do you use a drawing tablet for your digital stuff?
Check out my work on FurAffinity!
Follow me on Twitter!
Support me on Ko-Fi!

FurOnTheSide said:
Don't worry too much about others when creating art. It's your art you're creating, even if it's a take on someone else's work.
It might be a good idea to buy a sketchbook too, if you have trouble with certain parts like eyes, you can just draw variants of eyes for a few pages until you're confident about putting them on your illustrations.
One thing I didn't ask, do you use a drawing tablet for your digital stuff?
Click to expand...

yes i do but its old and kinda half broken so makes wiggly lines which you may have noticed. i cant afford a new one and i find it a lot more fun to use than using the pen tool to make digital art so i just use it anyway lol -v-' i do have sketchbooks actually i just got some more. i enjoy digital a lot more tho as its brighter, easy to colour and people seem to like it more. sketches dont really get much attention most of the time. i know i shouldnt think like that. i dont need other peoples validation of my art but at the same time i feel like i need my hobby to have a purpose rather than just creating for myself. art is meant to be shared if you know what i mean
Sanity is Overated
Join the crazy train! |\V^w^V/|
Names: FloppyPony, AutisAwsome, KubyPikachuKirby, Clereen/Clereenthepuppy, Flops