Anyone want to share art of the evolution of their fursona?

I never really sat down to draw a grand pictorial likeness so there’s not a huge gap between drawings nor a whole lot to depict on the evolution of Sigvard, at least not just yet! These are all works in progress with minimal changes... mostly I'm just trying to get proportions right and get use to drawing something in a style I’ve never tried before. For me it was trying to find the character while also trying to find my own style. I’m a 3-D artist and work much better doing that! I typically only drawing to plan out something or provide visuals when teaching or when explaining something. As an artist I have a reluctance of letting others draw or do my work for me because I'm stubborn and know I’m cabable of drawing it myself thus extremely critical of others work when I know what something is suppose to look like! Classic example of “if you want something done right you do it yourself” I feel that the two renderings that are not my own art make the character old looking, partly my fault due to lack of contex. I redrew my fursona again and it has not evolved past the last drawing. The pencil drawings are my own works. I must have draw this character over 100 times before settling on the last scribble. For whatever reason that one was really attractive to me and very reminiscent of classic Disney. I was not only creating a fursona but a main character so it had to feel right and be something others would like. Ultimately I will sculpt a moquette like what the Disney animators used to help draw different angles. When I do I’ll post it! My very first concept of the character who would eventually become Shane came to me about 11 or 12 years ago. At first this character was a red fox, and he had a different name, but I decided I wasn't really satisfied with this after a while. Since there are so many fox characters out there, I decided I wanted to change to something that was somewhat less common, but not really an oddity. I thought for a while about this, and finally made up my mind that he should be a border collie. I also wanted a different name as well (which I've explained in your thread on that subject). What hasn't changed at all is that from the very beginning, he was meant to be a military combat pilot in a pre-WWII period setting, as the main character in a historical science fiction and adventure story, and his design reflects that. The original red fox character concept circa 2009 was a US Navy pilot, but I later decided to make him an Army Air Corps pilot instead, which if I remember correctly had something to do with my preference for the fighter planes the Air Corps was flying in the late '30s, as opposed to the rather ungainly and graceless looking designs the Navy had at the time.

Since 2012 or 2013, very little has changed about the physical characteristics of Shane himself. He's still a very typical looking border collie with a black and white coat that appears somewhere between smooth and rough, with fringing around his face and on his neck, arms, tail, and probably some on his lower legs just above his heels. He has brown eyes and stands at 5'11" tall with a slim, strong build. The major focus of his design, however, is really his wardrobe, with a certain eye to period-authenticity, but in some cases with a few inventions of my own. This ranges from Army service dress, field, and flight uniforms, to casual civilian attire, and, at certain points of his story, an elegant looking tuxedo for evenings in warm, tropical settings, which includes a single-breasted white dinner jacket, a matching waistcoat, black trousers, pumps or oxfords, and a red carnation boutonniere.

The oldest image I have of Shane is a pencil drawing I did myself a little over four years ago, which shows him in an Army summer service dress uniform.

Another drawing I did shows him in one variation of what I think of as his standard outfit. This consists of either a khaki service uniform (without jacket), or a cotton flight suit of the same color. Over it, he would wear a leather A-2 flight jacket with squadron and name patches on the left breast. Footwear would be a pair of ankle boots, or more likely a design idea of my own: a pair of custom flying boots which come up to shin height, and have either laces or buckle fasteners. To date, this remains THE definitive image of Shane.

The only thing that has changed since I drew this is the addition of a red bandanna worn around the neck, which you can see him wearing in my profile pic (the culture within his particular squadron is somewhat relaxed and lacking spit and polish, so uniform regulations are often not strictly adhered to). So in short, he really hasn't "changed" in the last eight or nine years. I always had some idea of what I was trying to go for. His design has just been an ongoing development that has become clearer to me over time.


Sigvard Alfrothul said:
I typically only drawing to plan out something or provide visuals when teaching and explaining something. As an artist I have a reluctance of letting others draw or do my work for me because of the stubbornness of knowing I’m capable of drawing it myself thus extremely critical when I know what something is suppose to look like! Classic example of “if you want something done right you do it yourself”
Click to expand...

You've taken the words right out of my mouth here. While I do like the few commissions I have of Shane, I've found that when trying to explain things to artists, something always gets lost in translation, and this is part of the reason why I don't have much commissioned art. I'm very nitpicky about details, especially with his clothing. That being said, of the few commissioned pieces I have of him, I'm particularly proud of this one. It remains far and away my favorite, and his uniform is drawn quite accurately here too:

Guifrog in 2006, inspired on Battletoads: Guifrog today, based on a native species and closer to real life setting:

kiba went from cute, to cool, to murderous, to angy

A concept of what Lenago was planned to look like 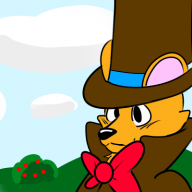 I know I shared this somewhere before, but here are some prototypes leading up to the "official" design.
Then there are several others where the artist did their own styles.

Stephanie, as my oldest and main sona, has had by far the most extensive evolution First, here's Dar'Rija - an old Khajiit side character I didn't use much initially in ESO, but I would go on to make and remake in Skyrim over and over as a way to reinvigorate interest in the game, as my old Argonian character wasn't cutting it. This designs evolved over like five years into the following, but the original version did become the basis for Iza, my secondary Oncilla character This is Stephanie's most direct ancestor. This design emerged around early 2020 - nearly five years after Dar'Rija's original look. Note the facial patterns. Next was the process of adapting her into art. It's mostly traced from screenshots because my lineart was awful and I hadn't done art in years. My first attempt I spammed the blur over to attempt to make the fur blend better but it didn't look so great. I used it as scaffolding to make a more clear version - my first FA upload, oddly enough. I soon after trimmed her fur and hair though - I felt it made her look too masculine and unkempt respectively. Looking at actual Eurasian Lynxes I made the right choice - the initial version was far too bulky.

I should also note the silhouette changed somewhat between the blurred version and the clear version in order to make her look cuddlier and less boxy. I contemplated adding glasses but couldn't get the look quite right.

I should note this first "official" version of her was actually made on my 19th Birthday. Poet, I guess.

Around a month later, just before I received my first commission back, I did this art, tweaking some of her colours so they stood out better - notably the orange and the increasingly burgundy coloured hair. Also - dipstick tail. So here's my first commission, a freebie from Dr.Scales on Reddit. It was certainly interesting seeing another artist's take on her, even if he did miss some details. It was good practice for him too - his art immediately after the freebie batch was much better quality than that beforehand. He doesn't seem to have done any since but looking at his FA, this is actually his most viewed art by far. It's actually got more views on his account than ANYTHING I've posted lmao. Around this time I joined here and @Ani-Mates asked to do fanart of her! It proved to be influential, as her eye patterns were reimagined as lashes/ liner. I also started drawing her ears smaller. For... reasons.

So after a few months of practise I officially redesigned her - with a new outfit, tweaked facial patterns, the liner/ eyelash thing, round glasses and redder hair. A couple notes - I still use her jumper, for indoor art, and the scarf is meant to be tartan but that's p hard to draw so for the most part it's simplified in art. I also later added inner-ear fluff based on art of her by @bosiu

Iza's also here. Technically this is a redesign of her but I'll cover that another time

And since then I haven't really updated her! I've got a ref sheet in the process of being commissioned, and this is her most recent art - a collab with Galaxy-Blues and Westy on Amino! It's got the rare detailed tartan. Oh! I actually doodled an ‘evolution’ chart of Milestone last year but didn’t post it anywhere to my knowledge. Prior to the early 2010s, she wasn’t a bird. Her species varied greatly, from a dolphin to even a human. Odd, I know. I wasn’t part of the furry fandom properly until 2020, so she was primarily just a character appearing in whatever weird stories I came up with. Now, when I was around ten, I became completely obsessed with birds. My favourites at the time were water birds and waders, so I made Milestone into one of those. Her apperance was based on a species called the black-winged stilt (in hindsight, the design isn’t all that accurate to the actual bird).
The 2014 design is a phoenix. I ended up wanting to changing it because she didn’t really fit in with most of the other characters in her fictional world — she was the only mythical animal out of the main cast, while all the others were real animals.
So, in 2020, I redesigned her to be a peregrine falcon, but had also considered the red kite to be another potential option. She still has phoenix-like powers, however. Birds of prey are some of my favourite animals, and I figured…why not use the speediest one?
You must log in or register to reply here.
Share:
Facebook Twitter Reddit Pinterest Tumblr WhatsApp Email Share Link
Top