Cartoons you used to watch/still watch.

As the title says. Lets hear what cartoons you watched when you were younger or still watch today.

I could keep going. You name it I have probably watched. This list is just a small snippet of what I used to watch.

Have you ever looked back at what you used to watch and ask yourself "Why the fuck did I ever watch that?"
Last edited: Jan 30, 2013
Awkward moment: When a GPS tells a gay man to go straight.

Just about every post I made for this thread, so let's start with that. In the links, there are regular TV shows mixed in as well, no to mention that many posts mention stuff that I too had/still watch:

Dastardly and Muttley in their Flying Machines, Detention, Batman Beyond, Molly-O, Medabots
http://forums.furaffinity.net/threads/121687-TV-Series-From-Our-Childhood?p=3130175&viewfull=1#post3130175

I can't think of a lot of series, honestly. I watch Avatar and the Korra-spin-off, but that's about it.
It doesn't help that we get badly dubbed re-runs here, so I get bored of cartoons pretty quickly.

Banned
Oh god. Aside from Dexter all the TV I watch is animation. I'll just cover my favorites.

And my all time favorite Beavis and Butthead

Trying to think of others, but my mind doesn't stretch that far.
I sold my soul to the devil

Allow me to fore-go TV shows and let me post some straight-to-video content.
Yes, most are of religious and educational content, but that doesn't detract them in any way.


Hanna-Barbera's The Greatest Adventure: Stories from the Bible.

I have 'em all and some that the picture's missing.
It follows the adventures of 3 archaeologists as they end up back in time while surveying an archaeological discovery.
BEAUTIFUL Hanna-Barbera animation and highly entertaining. Though one will note some stylistic changes, the series went through some production changes and spanned from the mid-80s to the early 90s. No complete DVD release available (a true shame). Despite being aimed at a younger audience, they're fun to watch. Great songs, too. 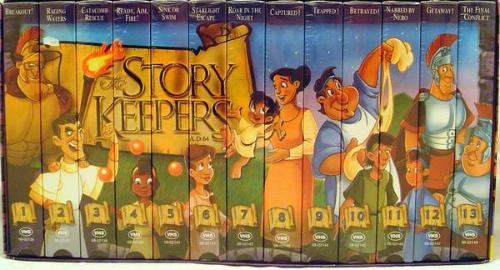 It's the adventures of a group of post-64 AD early Christians trying to keep the faith and pass it along during Emperor Nero's reign.
A fun, clever, original show. Got have all original individual VHS releases (pic not accurate), including the movies, Christmas Story Keepers and Easter Story Keepers (not shown). When the collection was finalized, 3 more volumes were added, most likely Easter Story Keepers divided in three parts. Those I don't have.

From the makers of Swan Princess:


I have almost all of 'em except Galileo and Joan of Arc, which my cousin does, and the Animated Stories from Church History and the Music-Video collection (bottom left). Every VHS came with an activity book, which we had, too. Beautiful old-school animation from the early 90s. Even more beautiful music and songs.
Those Animated Hero Classics videostaught me of those amazing individuals long before they were covered in history class.


Got 'em all, except David & Goliath. 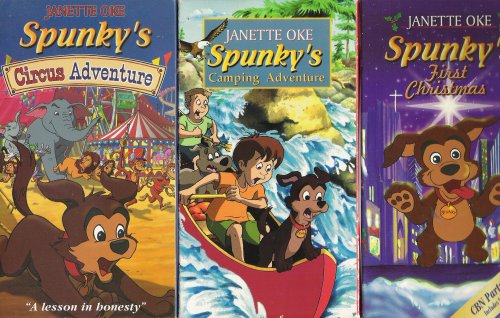 Got 'em all. The Christmas one is the first and best, not to mention the most touching.

Couldn't find a group pic. No matter, I didn't have the full series, so I chose this one, which I have. But they all have great box art!
I think this series did make it to TV. Maybe. More than just a series, it had board-games, interactive computer CD games, toys and action figures. It's also a radio show!

They're not gonna be in age order.


After a while I didn't like where cartoons were going. Then I found anime. Sorry the list was a bit long, I had pretty bad ADHD problems when I was a kid (still do sometimes) and I refused to take meds for it. That led to getting really bored with watching the same thing and skipping around from show to show. I still watch about 10-12 anime at a time along with reading about 4-5 manga at a time. I'm not really that good at multitasking, just good at remembering what was what and what last happened. xD

I used to watch, by channel (not truly complete):

TNT:
-Captain Planet
-Scooby-Doo, Where Are You?

Only a partial list, I used to watch pretty much anything when I was younger, This is mostly stuff I can remember.