Characters That Take no Shit.

I don't watch movies or TV anymore (not just because nuffin iz on enymoar, but I just suck at keeping up on stuff and don't know what's out there to watch).
Been watching a lot of Law and Order: Special Victims Unit.

Elliot Stabler... Man doesn't take crap from anyone. He's like a brick to even the craftiest criminals in the interrogation room. He does raise his voice to intimidate sometimes, but usually he's just a wicked smartass with a well deserved tough guy attitude. But he sympathizes with child victims and makes their perps REALLY pay for the crime because he himself has a large family that he cares for.

There may be some others so I want yours. The only thing I want are realistic characters. I'm sure we can name Spiderman, Hulk, or Big Core, but try to keep the character in the realm of realism. Cops/mafioso/vigilantes/scientists/House. Those kinds of people.
For some leniency, if they come from a fantasy environment, example, Sam Flynn from Tron 2, that's fine, but not Rinzler since he's not human. Basically, the character must have achievable human strength and skill. No cartoon characters period.

Name as many as you want. But explain yourself. You're being graded on this. 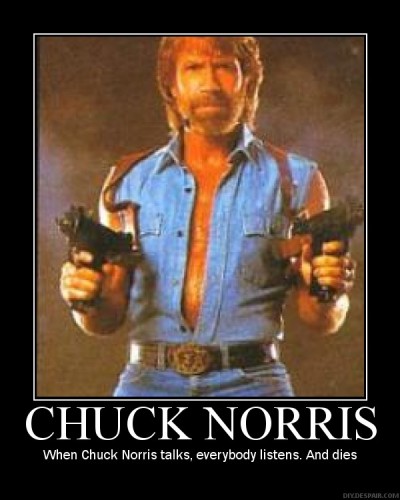 3.)Chuck Norris is currently suing NBC, claiming Law and Order are trademarked names for his left and right legs. I fucking love you. Seriously. Burt has been my hero since I was a little kid. <3 He's so badass, he doesn't let a lack of a proper pizza-cutting wheel get in the way of having a smaller slice of pizza.

He's so badass, he doesn't let a lack of a proper pizza-cutting wheel get in the way of having a smaller slice of pizza.

Too lazy to go find a picture of Snake Pliskon, but my vote is him.