Cows and Cow Furries in TV, Video and Film

Banned
Looking for clips to use for memes and reactions but got a friend who's into cows so anything's good really.

The focus is however on comedy rather than anything else but other stuff is still good.

Yes, I already have the fight scene from Kung Pow, who doesn't?
https://i.ibb.co/fdg8fc6/here-m-do-nematodes-are-people-too-i-stand-for-40880502.png 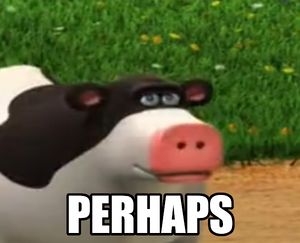 DM me your favorite dinosaur

Finally a thread for me!
Op let me know what you find, I’ve had poor luck finding any good examples of how cow furry hands work lol. Are they hooves? Are they fingers? Who knows.
-------------------
"When I'm in a slump, I comfort myself by saying "if I believe in dinosaurs, then somewhere, they must be believing in me. And If they believe in me, then I can believe in me."
PFP by the lovely Shadowphoenixfox!

I think furry force has a cow character in it they only have 3/2 episodes as made by small team but those few episodes are a walking meme themselves.
Howdy!
I'm a new artist and a big fan of Undertale please check out my FA page KippLink i try to post new updates frequently!

A lot of British advertising. Laughing cow, Dairylea and sometimes McDonalds Happy Meals have a cow character. I guess we have a lot of dairy produce...
also this monstrosity
furry trash & anti-fash

Also, can't believe this actually made it into a kid's show: