Ever mess with you fursona's design?

I do. She started off as a black jaguar named Lissa. Then a punky, pink hair-clad (pixie cut) black jaguar and ocelot hybrid, then I added freckles and gave her longer hair, and now she has her natural brown hair.
Examples of Mellie's evolutionary proccess: I drew this last one just now!! Ever futz with your fursona's design or colors? Pics would be a fun way to show off your creativity! But, they are completely optional if you don't have arts to show off, my buds. =3

Paws has gone back and forth from being flesh and blood and being a 'toy' (synthetic) a few times. Becoming the latter generally is now considered to have been 'an unwise move'. :>

I've messed with Deathless's design so many times. I've given her so many outfits and she had a major glow up in like the beginning of 2017!
Here's her first ever design I drew in like late 2016:

And after many different outfits and altercations, here she is now, being the beautiful queen she is:

My OC Sally has gone through a gradual change over her development. Not colour so much but outfit and appearance.
I did this one a few months ago as a comparison A lot actually, but mostly in regards to his fur pattern. At first Ryuukei was an orange tabby of sorts, then he kind of shifted to having a fox like fur pattern, then a hybrid of fox and snow leopard, then eventually shifting to the red panda like fur pattern that he has now. Then about a month ago he gained a second tail, although my current profile pic doesn't reflect that change yet.
The cute fluffy red panda cat, whom is also the creator of Infinite Cosmos, a furry Sci Fi universe in development.

I am in need of proofreaders and editors for my furry stories, join me on my discord if interested. Join the Infinite Cosmos Discord Server!

I have messed with my fursona's design a couple of times in the time I have had him. At first he was small and pretty cute but over time he has grown to be quite a talented fighter. I finally settled on turning him into a Lyca which is a closed species of my design, but it was fun going through all the changes and adaptations! Here are some of the drawings I did of him over time : Check out my creations :
My FurAffinity Profile
Furrasia TCG :
Twitter

I usually adjust small details and draw up a new ref sheet every few years, but for the most part, he's remained largely unchanged for almost 10 years. Some markings moved around, added some more white, and his gloves and socks got progressively longer over time. = FA \\ Weasyl // Twitter =
A man is less likely to become great the more he is dominated by reason: Few can achieve greatness - and none in art - if they are not dominated by illusion.
| Alan Skye reference sheet |​

Arthurtheshepherd said:
Arthur started as just a brown generic K9 but then he evolved into a more fully-fledged black and white border collie that likes to dress fancy
Click to expand...

Maelstrom was originally a brown wolf, almost like a maned wolf, with large ears that made her really self conscious so she usually kept them back flat against her head so people wouldn't notice them. As time went on, she sort of evolved - for backstory purposes, she was actually an Akhlut (wolf/orca from Inuit mythology) but had been sent to live on land as an ordinary wolf when she was an infant, to protect her from her pack's enemies. She always had characteristics of an ocean dwelling race - she could hold her breath for long periods, and salt water did not sting her eyes, and she was an excellent natural swimmer. I just changed her look a bit, with the coloring of an orca and the dorsal fin and flukes/tail of an orca. The rest of her remains wolf-like.

My fursona Fern has pretty much looked the same since I first made them. Though I did make them at the beginning of this year, I honestly don't have plans of changing their design at all. However, I do have ideas of some alternate versions of them. One being a werewolf version, the other being a feral dog version. But normally, Fern is a caracal/osprey hybrid.

While I don't plan on changing Fern's design, that's not to say I haven't had other fursonas in the past. Mainly Alley, the Louisiana Catahoula Leopard Dog / Beauceron cross. Their design had changed a bit over the years (originally they were a Great Dane, then I remade them as a Catahoula Leopard Dog, then later added the Beauceron, plus their colours have changed somewhat a few times). But I stopped using Alley as a fursona because I didn't feel really "connected" to them that way nor did I think a dog really suit me. 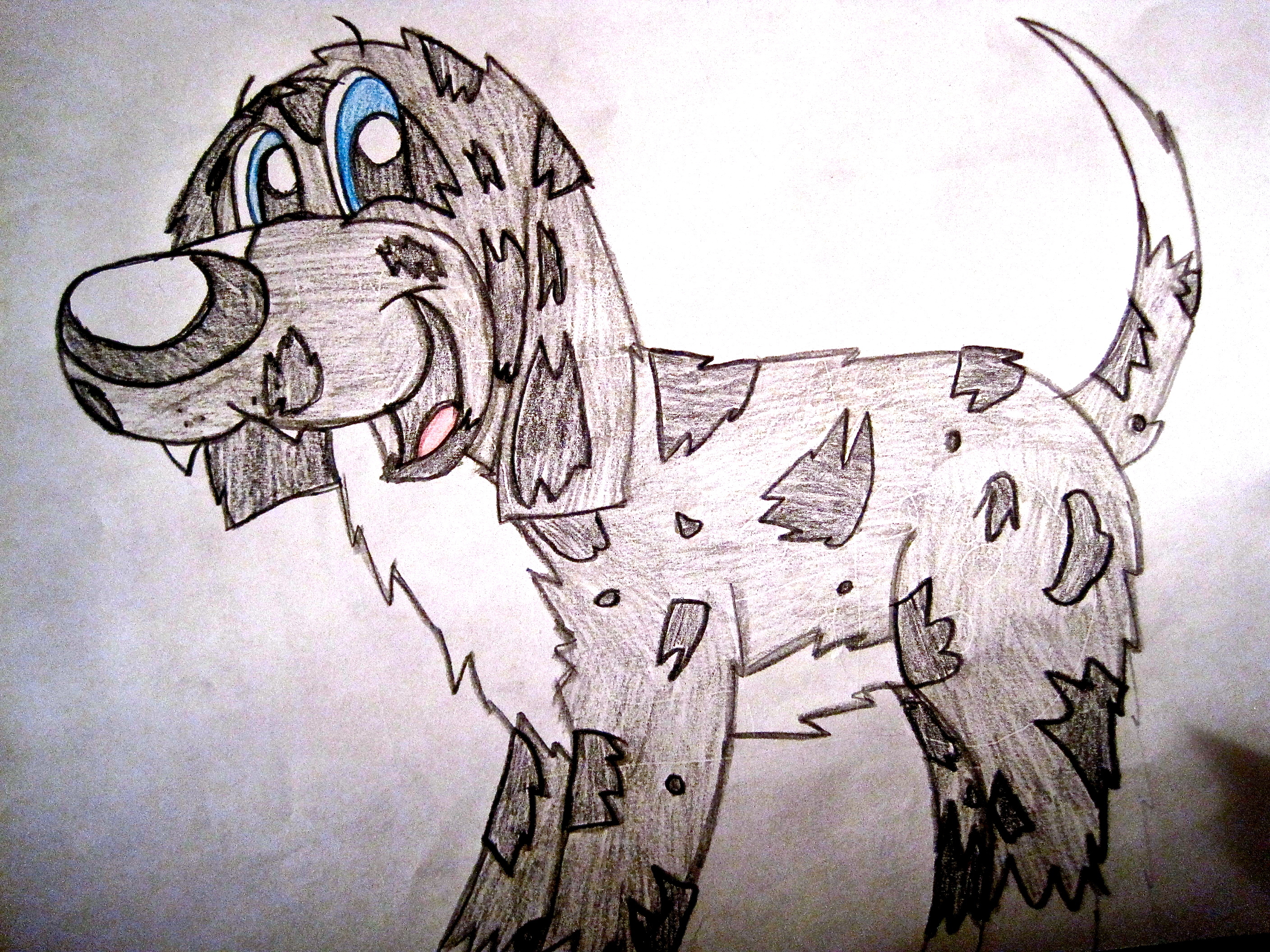 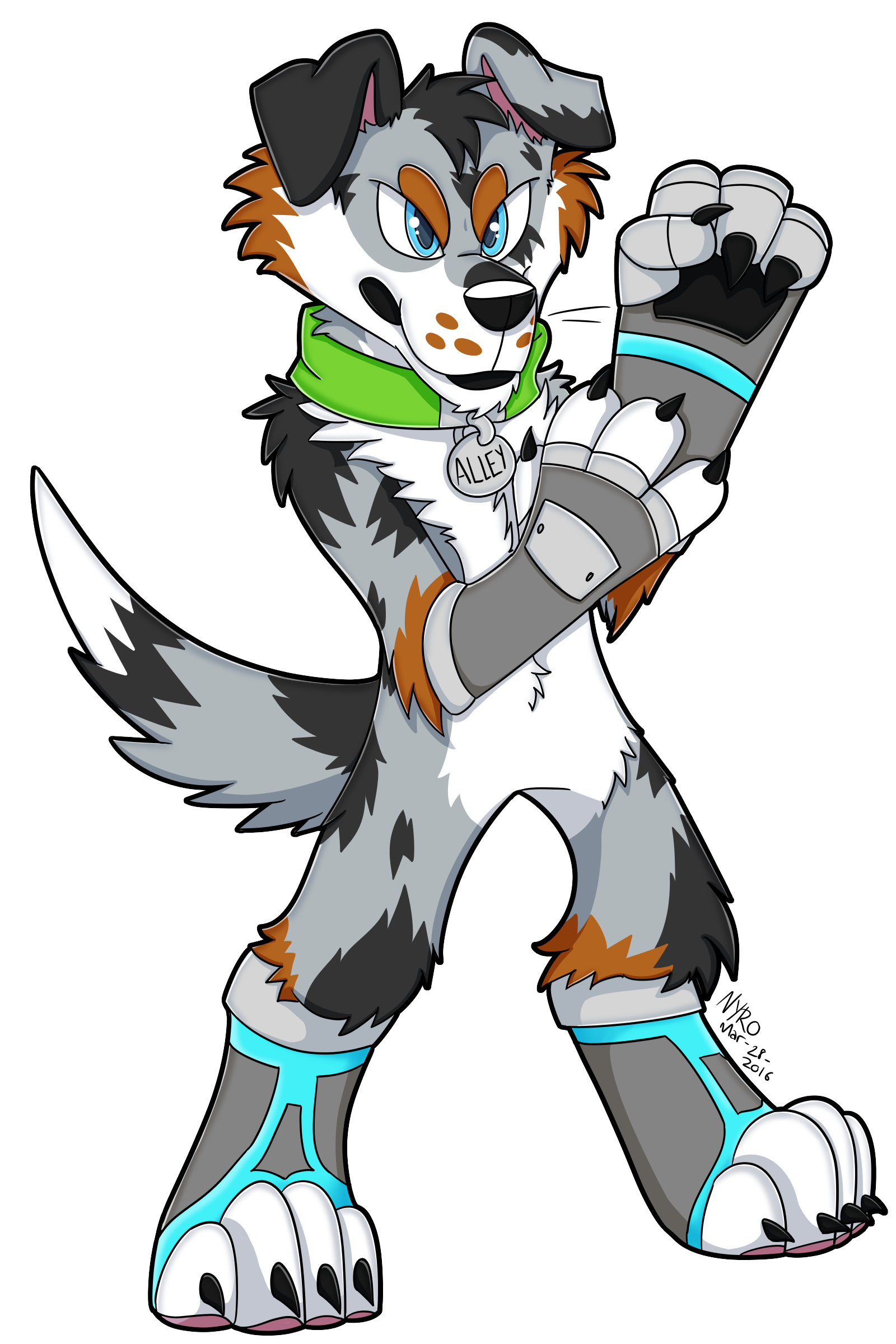 Alley's design as of 2018 (when I added Beauceron to their breed): 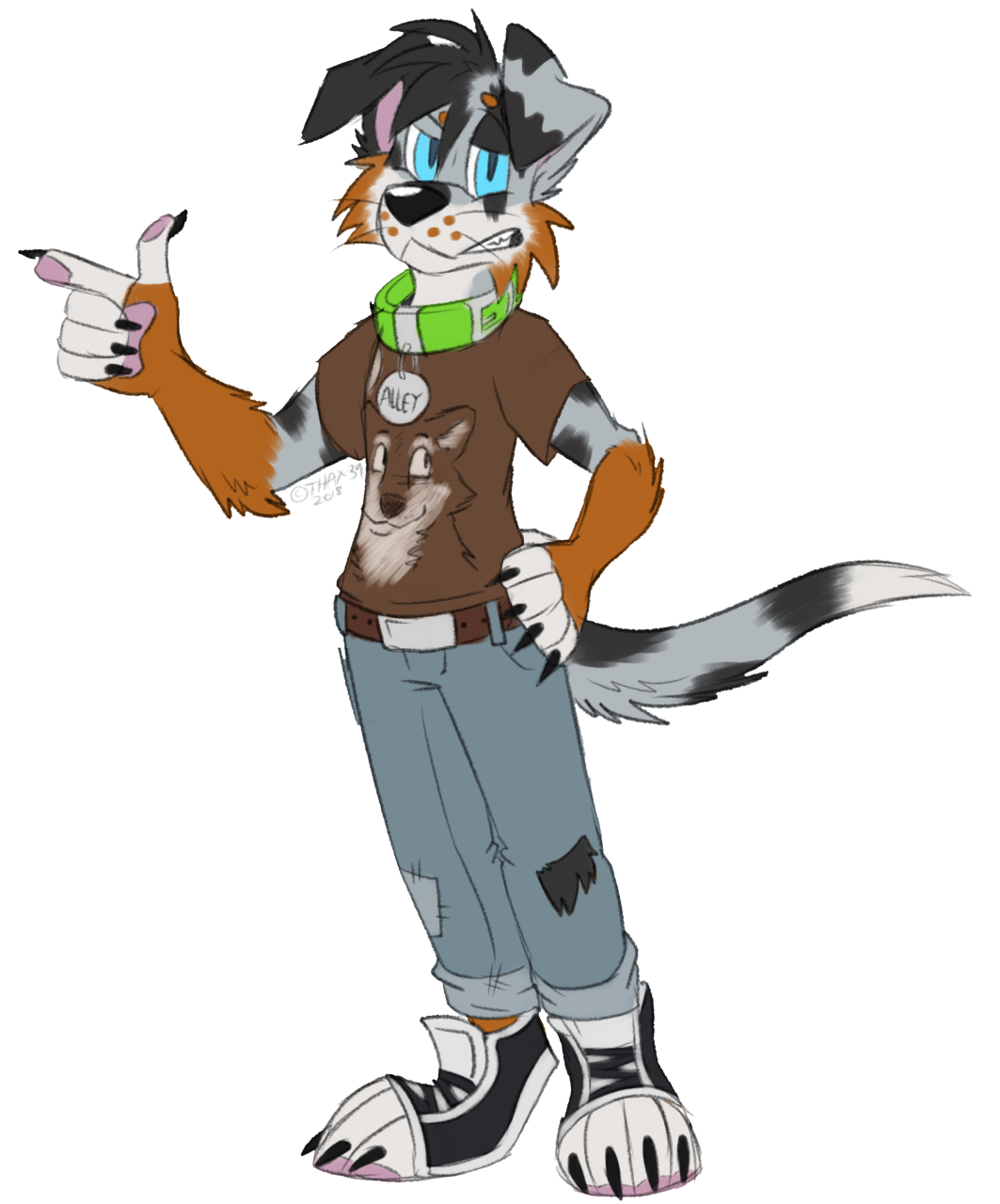 A design update from later 2018 of Alley:

Alley's current design as their own character and NOT my fursona anymore: 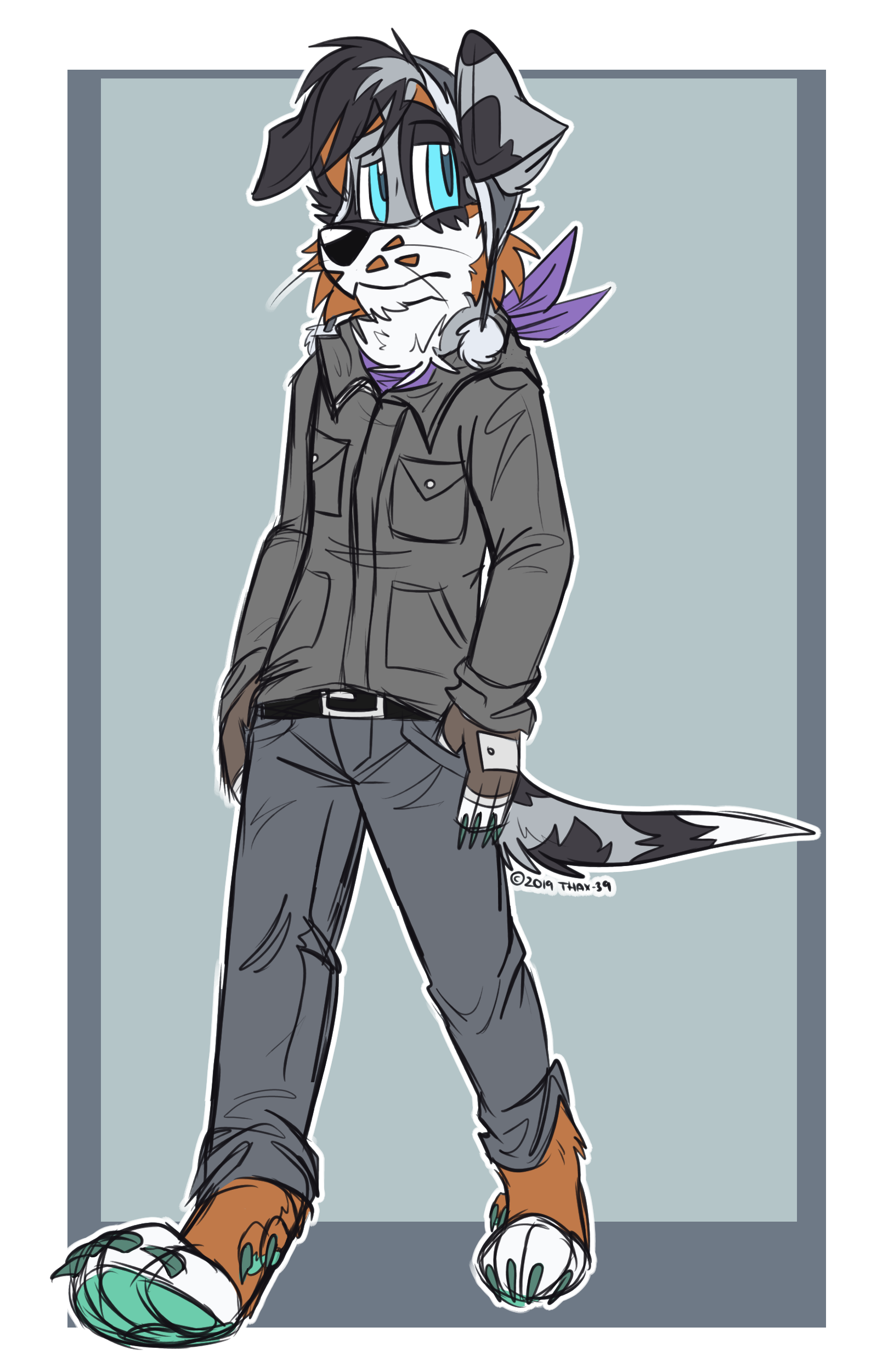 Alley is now just a character in one of the stories I am writing. Though they are no longer my fursona, they are still somewhat based on me. But there are enough differences to make them not me either. I have also left them somewhat mysterious as a character, such as basically nothing about their past or family being known by the rest of the characters.

I have an alternate look in which my right eye (Iris) is dark brown/almost black and my fangs are gold instead of silver/chrome.. That's pretty much it though.
♀ Panther Hybrid (Melanistic "big cat" mix)
Shiny hunter, Apolitcal, Hetero-Demi, proud Red Bull addict

I want to eventually retool Riot's design but I don't have the money for that today.
FA Account
https://www.furaffinity.net/user/existenceinanutshell/

When I made my first post I forgot to mention that awkward time where Arthur was a shepherd not a collie and that's where I got the username from because he was a Shepherd when I created it.
P

The last two iterations of my fursona since I decided to settle on a raccoon.
Prior to this she was a calico cat.

Finally comfortable in my fur!

Used to be a weekly occurance ^v^ was a rat, then a coyote, then an alien, then a beaked lizard, then a totally different alien, and now im a Cosmic rat! No wonder my old e mail address had shape shifter in it! Wont be changing it again though now, 20 years of flitting between species can leave one tired in confused ^v^!
If you open your mind too much, your brain falls out!

I have had different OCs I came up with as a kid, though my fursona started out as a brown maned wolf who was embarrassed by her large ears so she always kept them flat back against her head.
Through RP with her over the years, it was discovered that she was actually a race called the Akhlut, an orca-wolf from Inuit mythology, who had been sent to live on land as an infant to protect her from her pack's enemies.
So, she went from being a brown wolf, to a black and white one, with a whale's tail and a dorsal fin.
Still Waters Run Deep