Conseqq said:
Would you like to try your hand on Razz, or my girl Coffee?

Coffee's an outgoing, charismatic bovine barista at a local cafe, who enjoys hanging out with friends at the mall, going out on dates with charming bulls. Her favorite flower is the ox-eye daisy so she also enjoys grazing the fields and basking in nature. She's a total mom, however.

Razz is the complete opposite, she's an edgy, alternative Folyena (Fox, Wolf, Hyena). She enjoys clubbing, going to raves, drinking, getting new tattoos and piercings, and exploring the beds of many. She lives for the moment and grabs Life by the love-handles and goes to town.

Never heard of a folyena before (thanks for clarifying!) so I gave Razz a go! Wasn't sure about the rest of her coloring, so I took some liberties. If the patterns aren't to your liking you can message me and I'll send you copies of the original layers to change them up yourself.

BirdLittle said:
Never heard of a folyena before (thanks for clarifying!) so I gave Razz a go! Wasn't sure about the rest of her coloring, so I took some liberties. If the patterns aren't to your liking you can message me and I'll send you copies of the original layers to change them up yourself.

Unifur is a budding company that strives to connect consumers to producers in the art industry.

#1 forum dweller, fear me if you see me.

Hey!! do you think you can do a fullbody of my fursona? :0 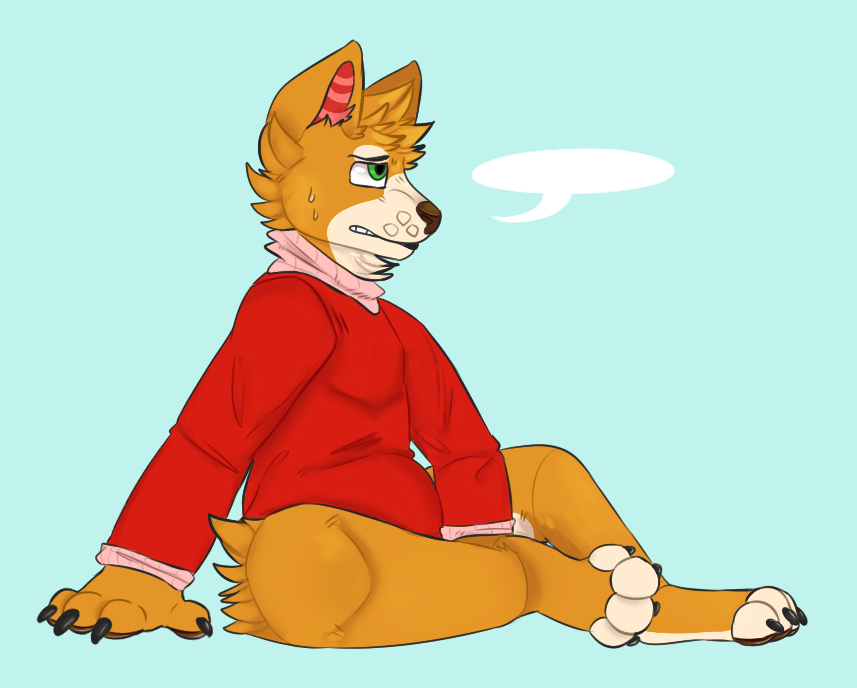 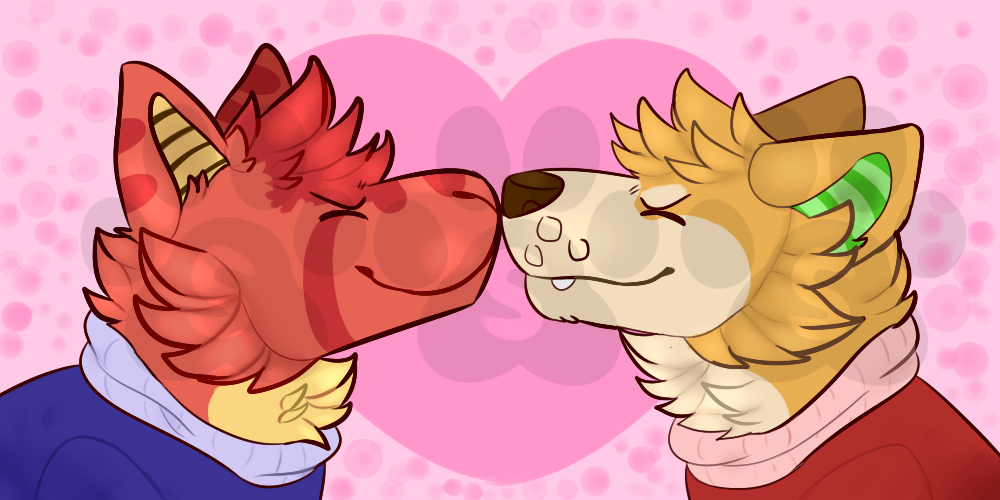 Lots of love for those who're trying to make a positive influence in their life. <3

Kangus said:
You probably have too much requests, but if you feel like drawing a kangaroo, here's my character's ref :

He's a joyful kangaroo, and since he's an engineer he loves to build or repair machines !

Hey, super cute design! Never painted a kangaroo before. Have a few pieces I need to tidy up when I get home later (ears, fix some colour bleeding past lines) but I was excited to share for now anyway!

Oh wow ! That's so cool !
He looks really good in your style, and I love the scene, thanks a lot !

Kangus said:
Oh wow ! That's so cool !
He looks really good in your style, and I love the scene, thanks a lot !
Click to expand...

No problem, glad you like him! Thanks for the support. I've updated my post with the polished version. You can download a high-res version from my DeviantArt: www.deviantart.com: Kangus the Kangaroo Engineer

BirdLittle said:
No problem, glad you like him! Thanks for the support. I've updated my post with the polished version. You can download a high-res version from my DeviantArt: www.deviantart.com: Kangus the Kangaroo Engineer
Click to expand...

I have a description if you don't mind working from that; it's a fox femboy (riveting, I know):

Jessi had always had a feminine form, ever since he was young. While his friends and classmates grew into their bodies, Jessi stayed a lithe shortstack, measuring in at a fullgrown 5'4" by the end of high school. Much of that height was in legs, which were quite long for a boy, and perfectly sculpted. While the other boys grew thicker and more muscular up top, Jessi never developed; all of his development happening a bit lower. His hips were wide; wider than even most of the girls his age, and they quickly tapered up to a thin, flat physique with just the lightest bit of softness to it. Naturally plump in the back, the foxboy loved to say that his ass was like that because he spent a lot of time sitting around on the computer. The truth was that though he made sure to skip gym class whenever possible, there wasn't a day where the fox couldn't be found doing squats or on a stationary bike, and that natural 'gift' turned into an ass so fine, it put the girls to shame.

Jessi kept his luscious light yellowish brown fur shining and close cropped, giving a naturally oiled look to him nearly all the time, and his naturally brown (though many times highlighted) hair hovered between shoulder length and a bit longer. Throughout high school, the vixen was known to dye his fur and hair, mostly bubblegum blue and cotton candy pink, in various different combinations, though it tended to be blue fur with pink markings and socks. The combination was pretty loose and it would be a surprise how one would find him (sometimes with blue/pink hair and natural yell fur, sometimes with blue fur and natural brown hair); but the fox would always return to the natural look time and again, even if he can barely decide in the moment.

I'd say his personality is playful but runs on his own prerogatives, and is easily annoyed when his ideal of what's gonna happen doesn't happen. Kind of bitchy, but easy to put in his place and remind who's planning the evening fun or whatever the plans are for the night. Oh, definitely a night owl. He probably needs glasses, but refuses to go to the optometrist.

I really, REALLY like the idea of a piece with attitude and personality; no matter the subject of what's happening. If I had to choose, all I'd care for in the picture is that it makes me feel something.

Can try me if you want
Not all who wander are lost
Icon by Alicezap..

EDIT: You can download a high res version on either my FA or DA accounts, both of the username BirdLittle.

OMG OMG OMG
HE LOOKS PERFECT!
TQTQ
Profile Pic made by the amazing SmolSammichOwO
My FA

BirdLittle said:
Hey! I've never drawn a squirrel before, so hopefully this is to your liking.

OMGOODNESS, this is so gorgeous!

I wish I looked this good!

Eternal thanks to you, Birdlittle!

Hello could you draw my sona please? I'll give you a description that has some things about hisprsonality.
Well, my character has undergone numerous modifies during time and i changed him again lately. Initially he was a normal for with straight long hair (maybe i have to old art to show you but im not sure) then i changed him to a dark gray for with the light blue fur and with electric blue legs and arms. His design slowly changed though time till now and i think this will be definitive. It's curious how i didn't made a concept art i always memorize the details X3. His colors are dark because i like the night, he is in fact mostly nocturnal animal. I decided to make him an hybrid (80% fox, 15% cat, 5% dog), he can see in the dark and i gave him the ability of bioluminescence. The light that he emits can change color and intensity, or even turn off. He is a tiny cub but he is extremely dangerous as well. It's to represent my innocent and young side that matches with the more aggressive one. During a roleplay the other participant made me have the power of healing blood and kisses, from then he discovered his magical powers. I gave him the possibility of brake his body into dozens of butterflies that can rally again to make his body appear again. It's a tactic to avoid attacks that is also a tribute to Bayonetta (one of my favorite games) were the main characters had that same anility. That's it i think. lol

Heyas if youre still taking request it would be awesome if you could draw my sona! www.furaffinity.net: Tero's Refsheet by TeroTheWolf hes supposed to be a bit more muscular and have an athletic build but I havent commissioned a full ref yet. But i give you full artistic freedom do whatever youd like!

The Bartender Everyone Loves

Hey, can you draw my dragon firing his signature move into a dark sky?
Lonesome..

could you do me as an android

https://share.icloud.com/photos/0IuWNOM663mBJKCu_5r4eaEUAI’m really nice once you get to know me

Hi there! I'd love to make a humble request for you to do something of Zipper: www.furaffinity.net: Zipper the Electric Fox reference sheet by Zipperfox

He's an awesome guy with a great personality, and I'm sure you'll do an awesome shot of him!

The Bartender Everyone Loves

Hey, I'm going to send my reference in a couple of hours.
Lonesome..

I’ve realized I got no anthro art of my character but idk if you could try anyway? He is quite a big guy (taken he is a shire/Belgian Draft mix) but be free to take your guess on an anthropomorphic look.
And please give him some underwear and possibly a t-shirt on. Hold the clothes in the grey hues if you decide to draw and color
www.furaffinity.net: Feral Reference: Werrick Fang [OC] by Maybe2morrow

But officer, I said "In Minecraft."

If you're still looking... Usually shy and awkward, but pretty aggressive behind the wheel of his truck.
Reeeeeeee

Your art is stunning! If you’re still looking for some characters to draw, I have some for ya that would looks amazing in your style!

Tylos is my feral ocean dragon: www.furaffinity.net: Tylos Official Reference 2019 by Jojer
He’s pretty simple and chill for a dragon.

My anthro sona is a Dog/Lizard hybrid and looks like a scaly Anubis:
www.furaffinity.net: Jojer 2019 by Jojer
He typically wears a white tank and a pair of khaki cargo shorts. He’s also typically seen with his beautiful wife, Josie the cow:
www.furaffinity.net: Josphitia "Josie" reference sheet by Gealira by Josphitia
She’s shy and nerdy and loves Pokémon, Marvel, and Magic the Gathering.

Thanks for the opportunity!

Hi, you have some really stunning art! I would be honored if you'd consider doing my Zipper fox. www.furaffinity.net: Zipper the Electric Fox reference sheet by Zipperfox

Can you draw a picture of Universe and Diamond hugging?