Cyberconnect2 announced via Famitsu today that a new Little Tail Bronx game titled "Fugue of the Battlefield" was in development. To quote Gematsu:

A dramatic strategy RPG and adventure story of dog-people and cat-people boys and girls. It inherits the world setting of Little Tail Bronx depicted in Tail Concerto and Solatorobo. It will also have shooting action and roguelike elements.

The protagonists are 11 children whose parents were kidnapped by the Belman Empire. They pilot a huge tank called Taranis that they find along the way to save the adults, and throw themselves into violent battles.
Click to expand...

After taking over a decade just to publish a low budget DS game
After a Japan-only phone game dying within a year
And after the Strelka Stories website mysteriously disappeared from the internet with no further mentions of it from CC2.
Its finally happening.

If you all aren't excited for this you don't know what you're missing. Solatorobo was one of the best games ever devised, a true gem of the DS era and probably the best "furry" game you could get. And now a sequel is finally here.

A new image has surfaced 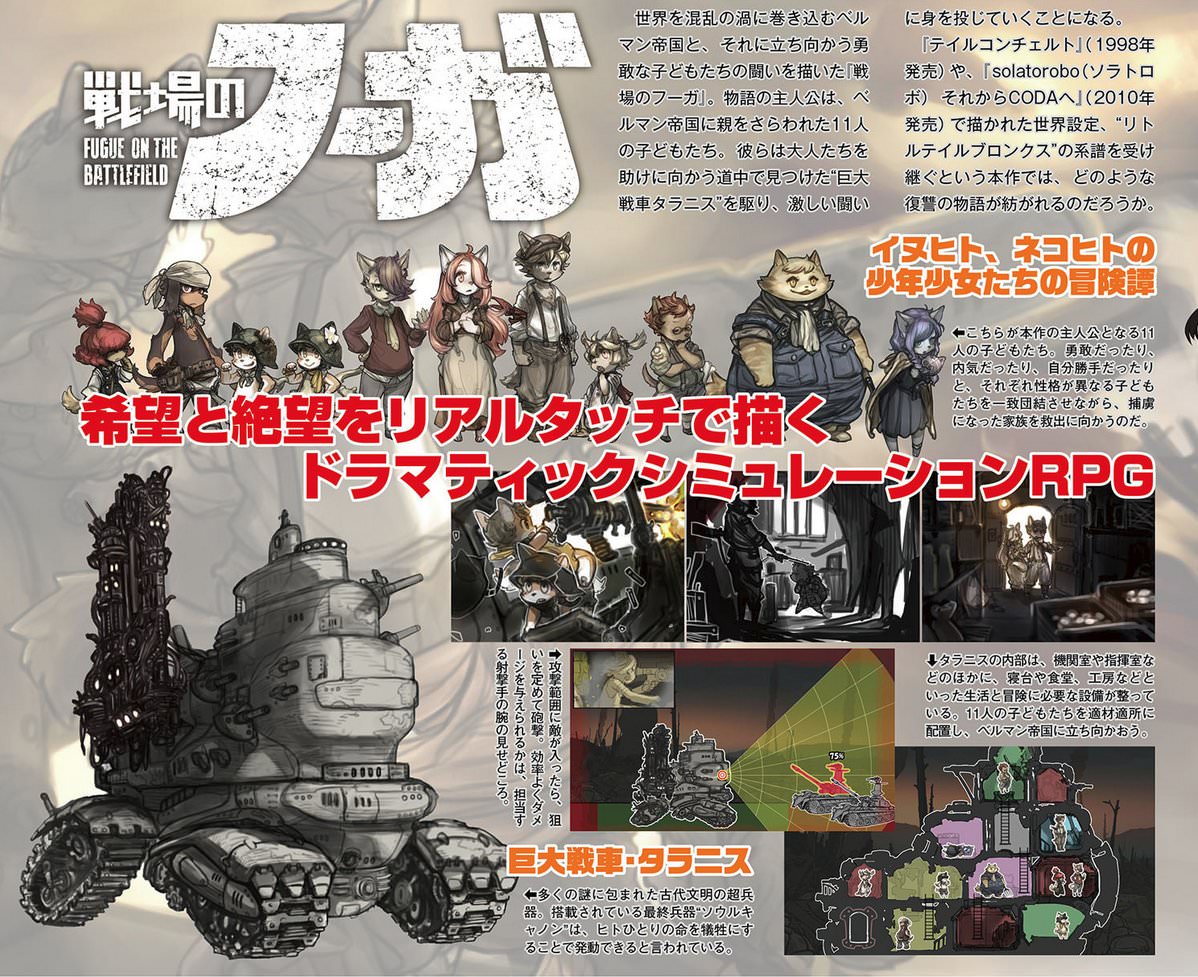 According to someone I know that can read Japanese, this says that the tank in Fugue is a weapon of ancient civilization, and that it has an ultimate weapon that sacrifices the life of the one who uses it in order to activate it.
Watch Dorohedoro
S

Have they mentioned what console it's going to be on? Is it just implied that it's probably going to be for the 3DS?

Have they mentioned what console it's going to be on? Is it just implied that it's probably going to be for the 3DS?
Click to expand...

Unfortunately not yet. There's no news on what platform it'll be.
I'm personally hoping for it to be a multiplat so that I can play it on PC. Its likely not going to have a humongous budget considering the obscurity of the LTB series though, so it could very well be a 3DS title.
Watch Dorohedoro

English version is out
And also its already confirmed for a Western release, as CC2 themselves will be publishing the game. 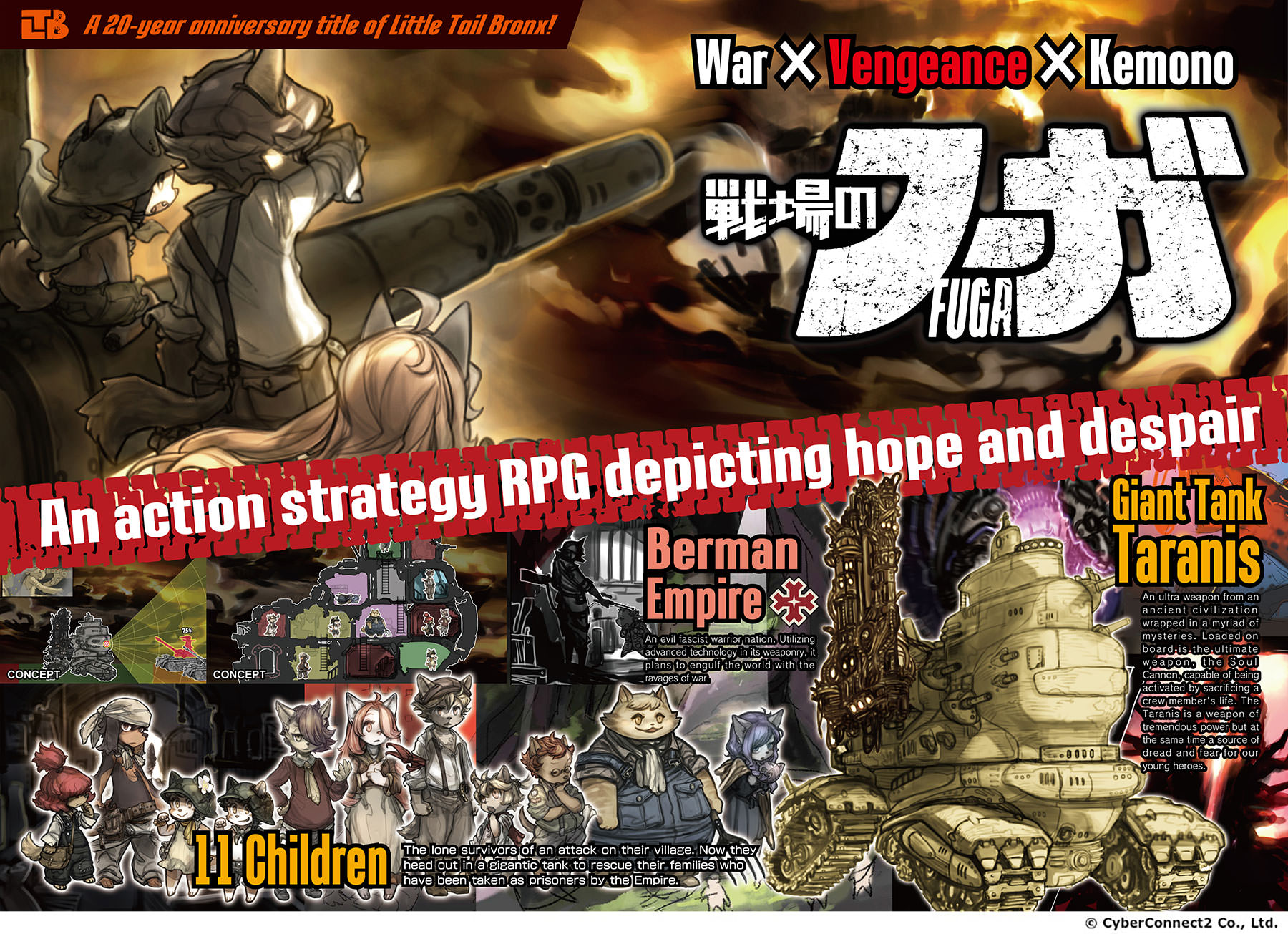 Lcs said:
Have they mentioned what console it's going to be on? Is it just implied that it's probably going to be for the 3DS?
Click to expand... 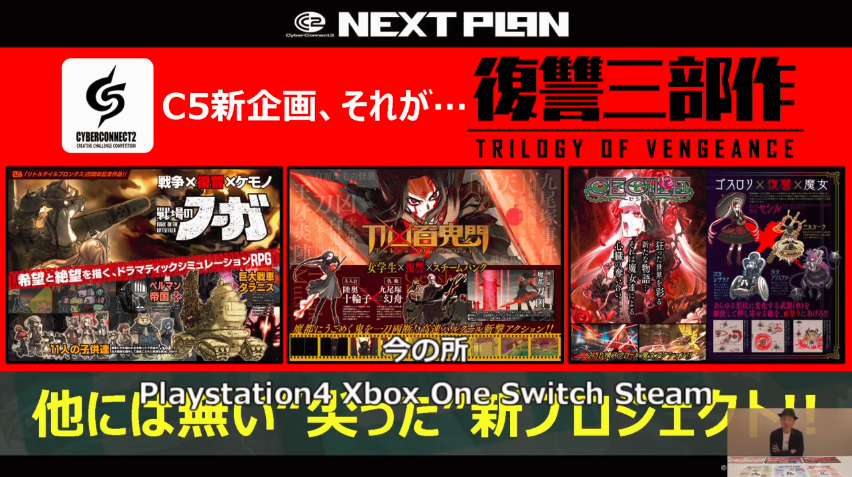 I can't wait! I just played and beat Solatorobo for the first time a day ago after discovering it's existence on a top 5 rarest ds games list. God, all I need now is something to play this one on once it comes out. I'm praying that the (hopefully) success of this game bring forth a remaster of Solatorobo so that the game is more accessible for people not willing to give up 80$ or go through an emulator.
C

Battlechili said:
A SEQUEL TO SOLATOROBO
Click to expand...

Plot line of it sounds very similar to Bokurano: Ours with the whole “group of children saving the world wielding a machine that is powered by their life force”

Wonder how they’re going to handle that theme in game.
Every time a vampire says he doesn't believe in lycanthropes, a werewolf bursts into flames.

Its looking like you'll set four children to pilot different weapons on the tank, with four other children set as supports. You'll also put a child in the superweapon part of the tank, with which they can't move from until the end of the battle. You'll have four turns to attack before the enemy attacks. After battles, you can explore, manage, and talk to other children inside of the tank! It seems to have an emphasis on strategy and base management.
Pictures: 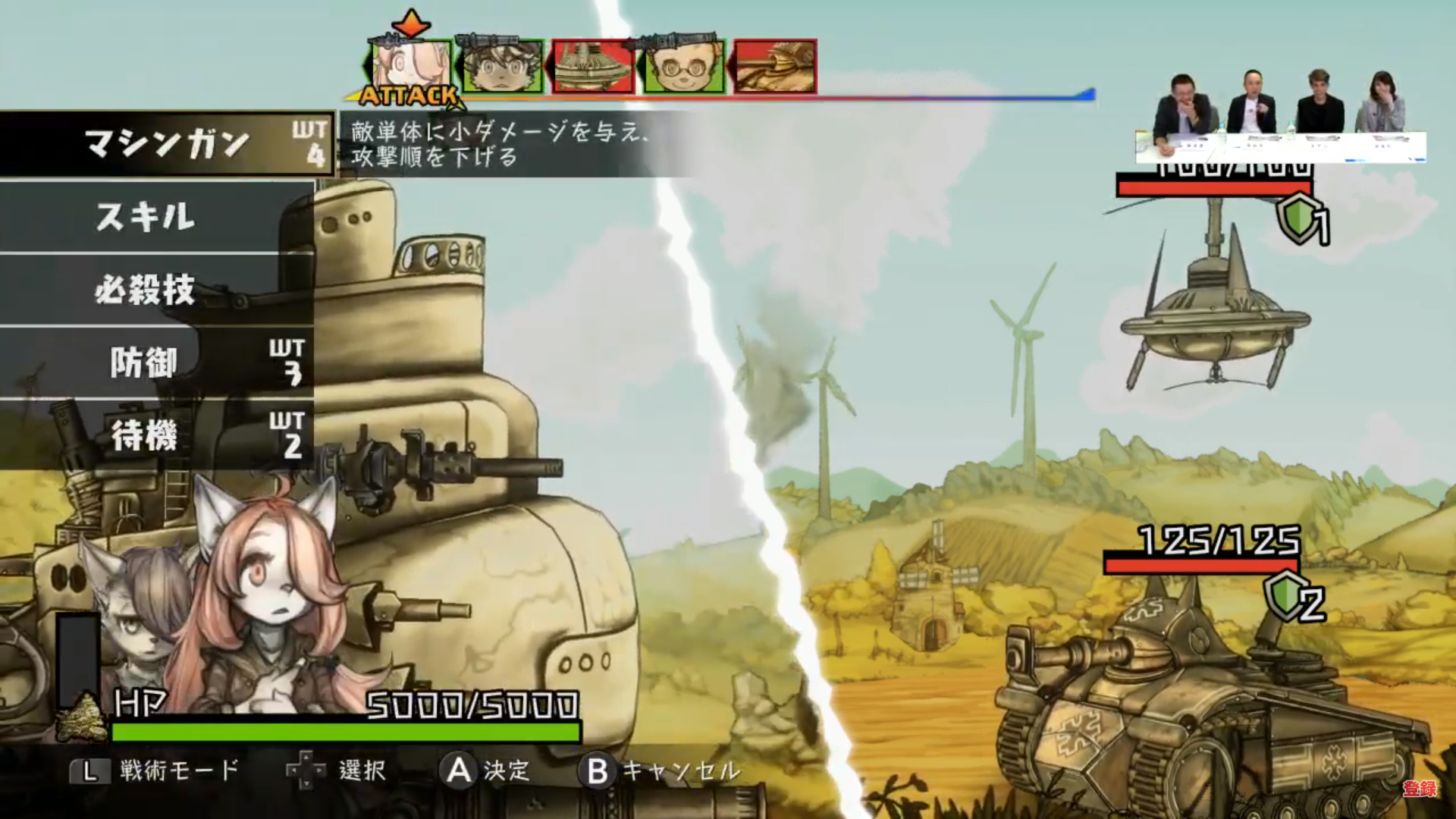 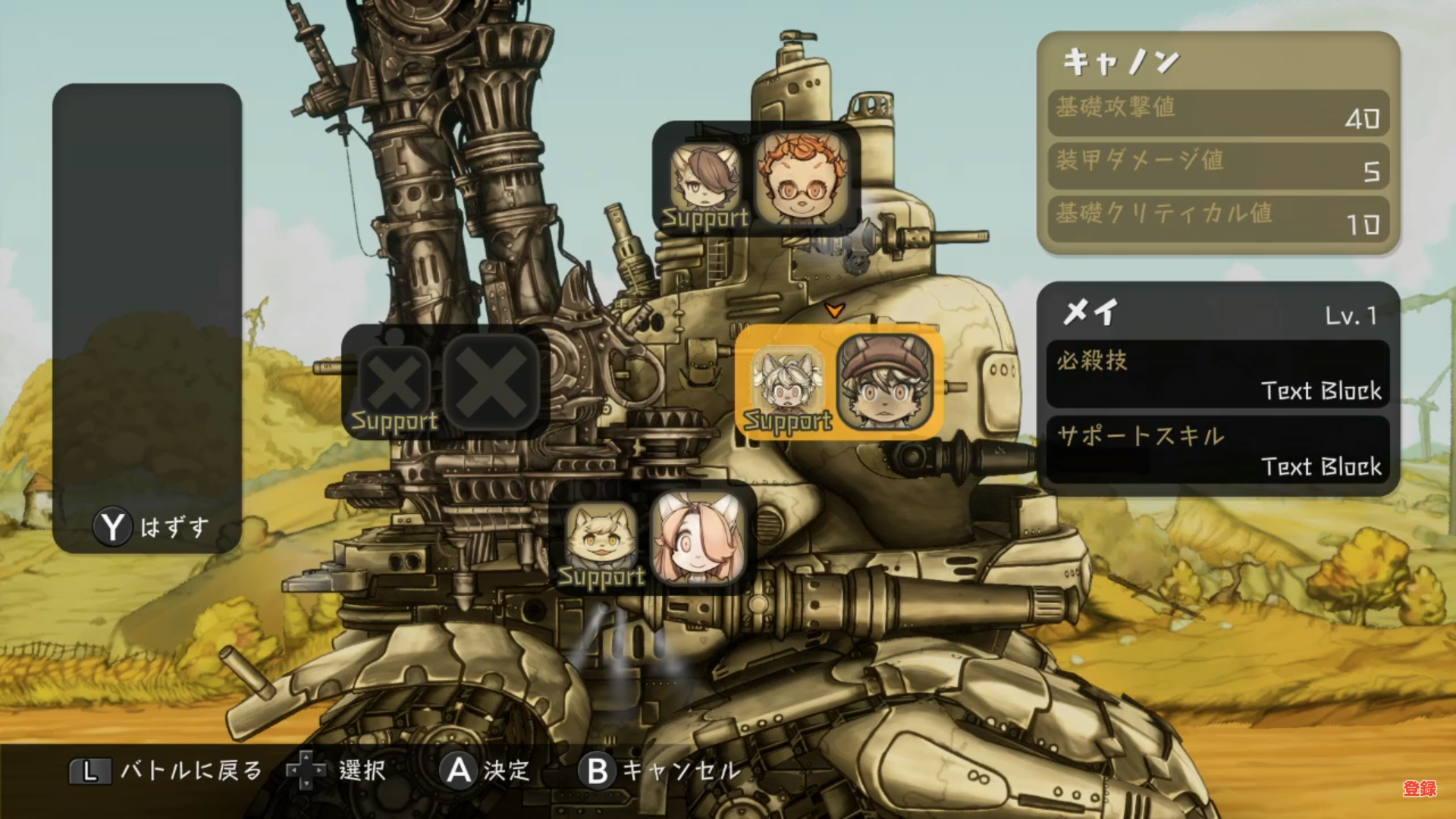 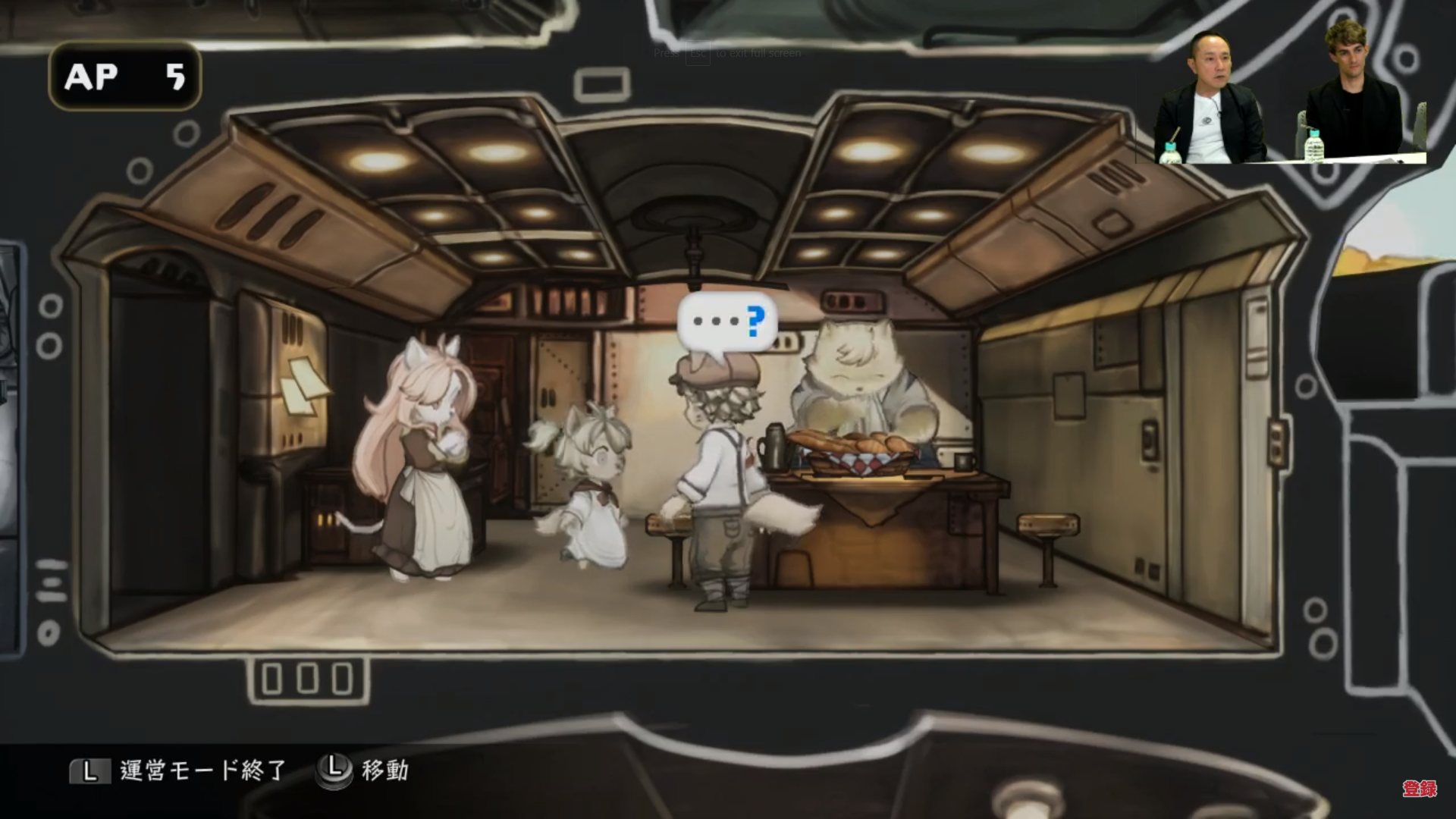 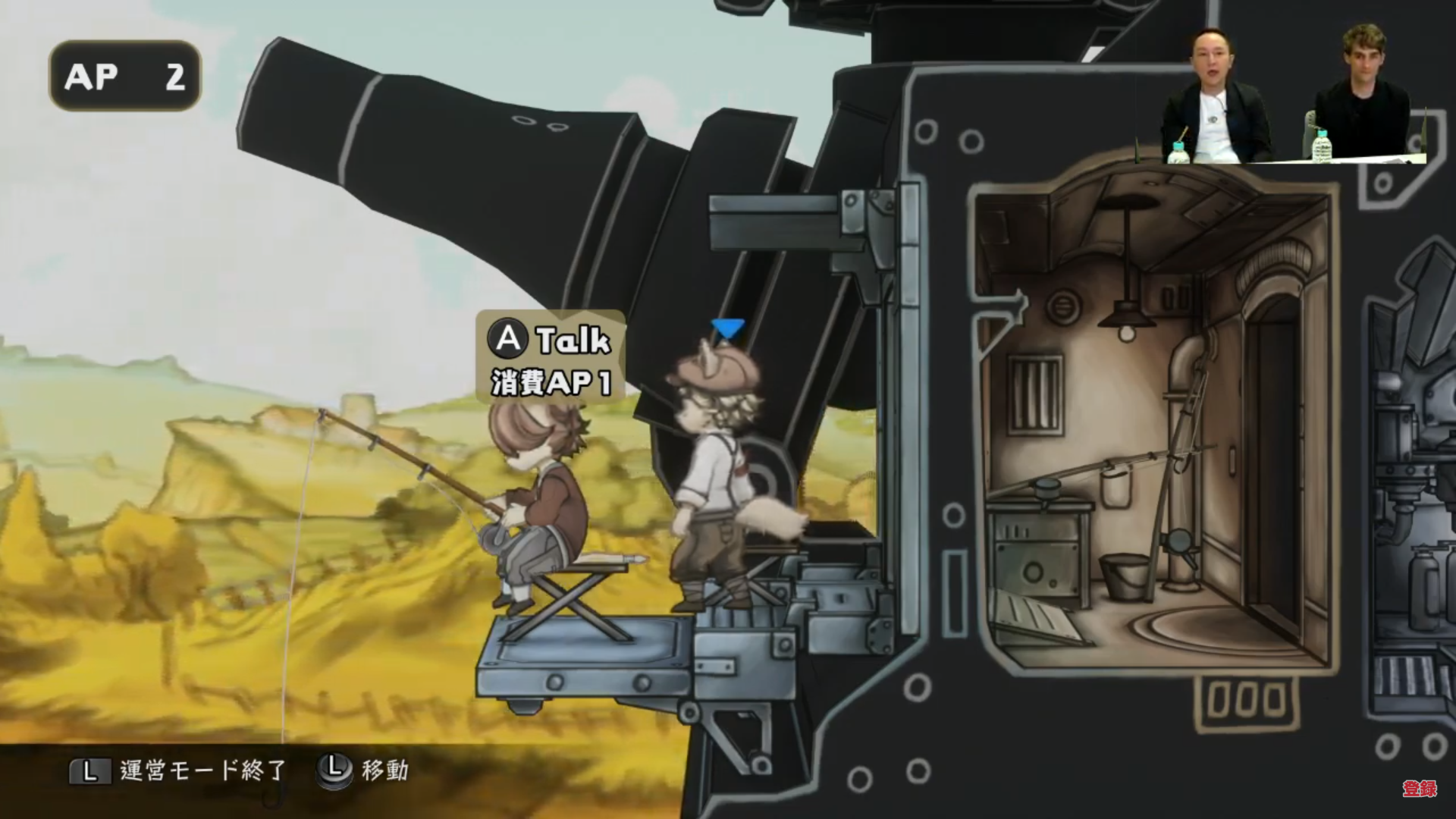 www.famitsu.com: サイバーコネクトツーがマンガ制作と人材大量採用計画を発表！ 最新作『戦場のフーガ』の詳細とともに、CC2の今後の野望を松山洋社長が熱く語る!! - ファミ通.com
>Fuga forces you to restart the game from the beginning (chapter 1) if you get a game-over (it is 12 chapters long)
>late game will be hard enough to where you might have to choose between losing progress or firing the Soul Cannon and killing one of the children
>Soul Cannon is used at the player's volition, not as forced story scenes

Also they released a prequel animated comic for the game!
Remember to turn on subtitles!
Watch Dorohedoro

Kinda disappointed that it's just cats and dogs. I would love to see a game with more interesting animals as playables. Cats and dogs are kinda meh.

Me when furry game is announced

Katanas are the archetype of the inclined plane.

STEAM PAGE IS UP 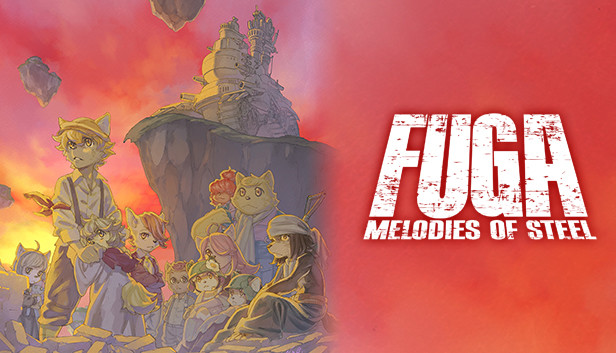 Fuga: Melodies of Steel on Steam

Fuga: Melodies of Steel is an RPG where you place children, each with their own unique characteristics and skills, at different gun turrets in a tank to fight against the enemy.

ITS OUT
AND ITS FANTASTIC OMG
There is SO MUCH to manage you've really gotta be on your toes to be as efficient as possible, especially as more sections of the tank become available and as more children join your party. You start out with 6 kids and get more as you progress; you have a set number of action points during intermissions to use to increase the rapport between different members of the team, which can affect the specific bonuses the kids have when fighting together. Whenever in combat you have three sets of guns, each with two kids on them. Different kids have different weapon abilities, but generally the main idea is you have high powered low accuracy cannons, well balanced grenade launchers, and high accuracy but weak machine guns, with some enemies being weak against specific weapons. Enemies can have armor ratings that some skills can lower to make hurting them easier, and the main soul cannon can only be used during boss fights if your health gets low. The game is also super pretty and cute! Every ending card is done by a different artist.
The game is so pretty and well thought out. You have lots of other stuff you can do on the tank too like farm, prepare meals, fish, sleep, observe the surroundings, communicate with other members of the team...these all take up action points though so you gotta use them wisely to be most effective during battles.

Oh and the music is really great too!!! From what I’ve both seen and heard:

Pro’s: Mechanics are solid, soundtrack is decent, art’s good. May or may not be getting a follow-up too. Game has a reasonable enough length to keep somebody busy, but not enough to be a slog. Varying paths too, if mostly just mechanically relevant.

Con’s: Story takes a while to get rolling, some questionable archetype choices (or lack thereof), surprisingly little chat among most of the cast (with the main exception having spoiler reasons).

Outside the questionable archetype stuff (some of which seems to be translation dependent), looks worthwhile to grab if on sale / your sort of game, in the very least.
"A small stone may only make a small ripple at first, but someday it will be a wave."

So, who did you shoot out of the cannon first?

Fug, i've been waiting for this game for some time but i just realized i don't have enough RAM for it. Oh well, i'll wait for the PS4 port

Attaman said:
From what I’ve both seen and heard:

Pro’s: Mechanics are solid, soundtrack is decent, art’s good. May or may not be getting a follow-up too. Game has a reasonable enough length to keep somebody busy, but not enough to be a slog. Varying paths too, if mostly just mechanically relevant.

Con’s: Story takes a while to get rolling, some questionable archetype choices (or lack thereof), surprisingly little chat among most of the cast (with the main exception having spoiler reasons).

Outside the questionable archetype stuff (some of which seems to be translation dependent), looks worthwhile to grab if on sale / your sort of game, in the very least.
Click to expand...

This is pretty accurate, but a few specifics: The game is about 20 hours long more specifically, pretty in line with Solatorobo's length. The varying paths are only insofar as letting you choose between routes with more/more challenging enemies and more rewards and routes that are easier with less rewards. The story doesn't have much in terms of branching paths beyond having a "true" ending if you keep everyone alive vs if you don't from my understanding.
While there isn't a whole lot of chat between the characters, you do get a few link events between each and every character with each other where they go through a short little conversation arc in visual-novel esque scenes, sometimes where you see character growth, and these conversations help increase the bonds between characters which makes them more powerful when paired together in combat. I think my favorite link events were between Mei and Boron. She has this cute conversation where she basically says she thinks Boron is really cool for being so big and how she wants to grow up to be just like him, and I thought that was sweet.
Not really meaning to correct you actually, just wanted to elaborate a bit.
Story isn't too complex, really most of the meat is in the gameplay, but it has some neat lore info that add to the world and help lead to Solatorobo/Tail Concerto.

TheCrocWhoSoldTheWorld said:
Fug, i've been waiting for this game for some time but i just realized i don't have enough RAM for it. Oh well, i'll wait for the PS4 port
Click to expand...

Its already on ps4
Link:
Official PlayStation™Store US

perkele said:
So, who did you shoot out of the cannon first?

Only the dummy soul
I beat the game without any of the kids dying :3
Last edited: Aug 19, 2021
Watch Dorohedoro

TrishaCat said:
Its already on ps4
Click to expand...

Already on chapter 8
So far so good, the story so far is kinda meh but the gameplay, music and art is great.
I love how the Taranis looks and moves like it's about to fall apart but somehow it keeps itself together with magic, kinda like Howl's castle and the tank in Robot Carnival's intro and outro, meanwhile the Berman Empire's machines look both realistic and cartoonie at the same time, similar to the vehicles in Metal Slug.
The character felt a bit one dimentinal but i still liked most of them, i just wish the game were a lil bit harder so that using the soul cannon became an even bigger decision, because as it is right now i would just rather restart from a checkpoint than sacrificing a character, it also doesnt help that the special edition of the game gives you a doll to sacrifice instead of one of the kids.

Anyway, i hope this game sells well, that way CC2 could make more stuff like this instead of endless Naruto and .hack games for Bamco, maybe they could even revisit this world and expand on the dungeon crawling minigame and make a spinoff off of it