I was wondering if anybody here could throw a few titles at me of any Furry-related-anime type stuff, as I haven't a bloody clue.

Hmm...looks pretty sexy! Thanks for the screenies. I've jotted it down.
"Matt Damon!" - Matt Damon

I've also heard good things about Wolf's Rain, though I haven't had a chance to watch it myself yet.
Now you mention it though, I haven't heard about many furry animes either, but I know a few people who love anime so I'll see if they know anything.
Den som vÃ¤ntar pÃ¥ nÃ¥got gott, vÃ¤ntar aldrig fÃ¶r lÃ¤nge.

Wolf's Rain begins in Freeze City, a northern city in a world where the majority of people live in poverty and hardship. According to an old legend, when the end of the world comes, Paradise will appear, however, only wolves will have access to it. Although wolves are believed to have been hunted to extinction nearly two hundred years ago, they still exist, surviving by taking human form.

Thanks to Wikipedia. I made sure to not include spoilers.
Watching FAF burn.
​

If you don't mind me asking, why is Wolf's Rain considered "furry"? The characters are either human or animal with no in-between...
[sigpic]http://forums.furaffinity.net/image.php?type=sigpic&userid=5174&dateline=1239177400[/sigpic]
This place is torture. I love it!​

Its the closest thing to it. Everything else has cat girls, that are more human than furry.
Watching FAF burn.
​

There is no such thing as a furry anime. They are two totally incompatable things.
http://www.furaffinity.net/user/kjmars63/​

Shapeshifting, sentient animals who can speak - there is a subculture within furry that focuses on one or both of these things. "Humanoid" isn't the only thing that defines an anthropomorphic animal.
My FA Page

There is a kid's anime called Kyetsu Zorri(I think that's how it's spelled).

It is about a fox furry who is the self proclamed king of the tricksters.

He and his two warthog followers try to win the love of a feline princess by using trickery.

Wolf's rain is also good to for its action and different plot threads.

Anime really doesn't have furry except for neko (anime people with ears and a tail which in my opinion doesn't even count as a furry).
Warning: Things are about to get animated!

Maybe Fruits Basket? The characters change to their zodiac animals when they are hugged by someone of the opposite gender who are not members of their family. I don't know that it would really be considered furry, but I LOVED it. It's really cute and funny, and it is one of my favorite animes. ^^

YES! Only seen the first few episodes, but the rat's cute stare won me over! <3
Is the afro the champion, or is the champion the afro?

TwilightV said:
YES! Only seen the first few episodes, but the rat's cute stare won me over! <3
Click to expand...

ZOMG YUKI!! <3 He is awesome, but I liked Kyo, the kitty. He was so evil that it was cute. ^^ But my favorite one of all of them is the cow, HARU!!! <333 It's awesome how he can go from being a perfect angel one second to wanting to kill the world the next second. And the scene where the principal doubted his real hair color was hilarious. x3 But I think the cutest one and the one I can understand the best is Kisa, the tiger. She is really shy and has a low self esteem. She's so cute!! ^^ *goes to find screenshots* 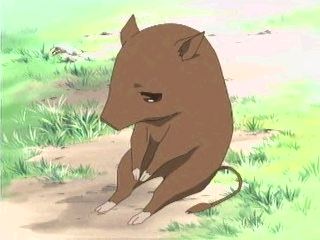 I could swear there was an anime with this anthro-lion-warrior thing as a main character. I could be wrong, but I've seen fanart. At least, I think it was fanart.
My FA Account: http://www.furaffinity.net/user/chetchaka
K

Yup, Wolf's Rain is pretty sexy. I just finished it a couple weeks ago. It's very dark, very melodramatic, very philosophical, and has a fair amount of violence including at least one scene that left me disturbed for hours after seeing it. It also moves at a fairly slow pace but there is quite a bit of character development which I thought made it a very engaging series. Certain things will not make sense along the way but if you stick with it, most of the gaps will slowly fill in. Some things are just never explained, but what can you do. There are a handful of lighter/comedic moments too so it's not all dark and depressing. If you're a hyperactive teenager with a five minute attention span, it's probably not for you. Towards the end, if you make it that far, it becomes incredibly suspenseful. The ending will probably bother you and make you think about what it means. All in all I'd highly recommend it. But no, I wouldn't say it's furry. It's certainly of interest to furries though, as the wolves are very very well drawn, as you can see in the images posted here.

okay off the top of my head...


if you liked Wolf's Rain for the violence, you might like Ginga Nagareboshi Gin, if you can excuse the fact that it's a very, VERY old anime and as such the quality of the animation is almost piss poor with the nastolgia factor being the only thing to excuse it.

ASD fansubs is redoing it, and also subbed it's sequel which wasn't as good cause the main character was really annoying, but you can pretty much find this anime on youtube, if you look hard enough (I hope)
"I never understood why people desired the sky. If you look closely at the horizen, you'll find that the world is just as endless. Go ahead dream all you want about what is beyond your reach, on this earth I'll seek my own freedom."

Now I got the right spelling.

(Searches You Tube for Kaiketsu Zorori)
Warning: Things are about to get animated!

Involves a fox deity that switches between its form, a male human, and a female human. It also has some episodes with furries in them.

You see, the problem here is that unlike in the West, Japan has specifics for this, as opposed to the encompassing term "furry".

Kemono refers to talking animals with human features. They can be either "kiddy" like Zorrori or "mature" like Hyper Police (which is an anime full of anthro btw).

I recommend Hyper Police because it has a good balance of kemono and kemonomimi. There's also Wild Knights Gulkeeva.

If you're into manga you should look for Drakuun.

Wolfs Rain and Fruits Basket are NOT either.
http://img.photobucket.com/albums/v213/wolfoxokamichan/sigmuscle2.jpg
http://i9.tinypic.com/71mmruw.gif
Pump It Up!
[SIGPIC][/SIGPIC]

I see the goal before me