Introduce us your pets!

I didn't find with search any thread about this, but if there is already somewhere one or more, sorry about this.
Main idea is that you introduce your pet(s) and maybe show picture about it. Tell the story behind your animal companions (if they're from shelters or other stories) and talk with others, of course.

I have this precious old lady, Nanami.
I found her when she was only 2 days old, from barn's attic with her brother Rölli. She was feral cat.
Their mommy needed to put to sleep because she was paralyzed (hit by a car). It was kinda miracle that I heard kitten peeps in that barn and I followed it.
After that day, Nanami was with me always and she is still with me. She is now 8 years old, housecat and sterilized. Nanami is very social and loves attention. She sleeps with me every night and she is totally my baby. I feed her when she was kitten (it was rough times. I needed to wake up maaaany times in the night that I can feed her) and I must say that when her eyes opened, I felt so deep love for this lady that I adopted her.
Sadly her brother died soon.
Nanami is health, happy and a little bit chubby girl.
Twitter • DeviantART • FurAffinity • Toyhou.se

I have a Manx cat named Iggy, short for Ignatius J. Cat.

I gotta find a pic!
Skunky hi-jinx, mischief and more! Visit Skunk Hollow!
Please donate to The Spank-A-Fox Foundation. With your generous contribution, a naughty fox can be spanked today!
​

Awh, I had red manx too many years ago. He was just fat and lazy gentleman xD
Twitter • DeviantART • FurAffinity • Toyhou.se

This is my dog Diego, he is a Puggle.

The horse on the left is Freddie, an Irish sportshorse. The one on the right is Rosie, a |Heavy Cob.

This is Dexter, a boxer.

This is Whisker, Misty's sister.

I have another ginger cat called Berty, but I don't have a picture.
Check out my FA page! Userpage of kioskask -- Fur Affinity [dot] net ... pwease...

I have a cat named Artemis. He's super photogenic and cute.
Included is a picture from this last Halloween. He's a super loving kitty who loves cuddling, but he doesn't know how to meow, which is cute.
He's been in my mother's care for a little while, but I can have him back in a few months when I can afford the pet deposit for him. I still miss him a lot, though.

I found him on my front porch in the middle of the night, curled up in a sad, cold little ball, trying to shove himself under the door frame where it was warm. He probably got lost in the woods and separated from his mother, but he was definitely no older than 2 or 3 weeks when I found him. I fed him and he got huge immediately, but he's terrified of going outside. He won't leave the front porch (pictured below) and cries (it's kind of a wheezy sound, because he can't meow.) if you accidentally leave him out there. Poor baby. (I'm also trying to convince my boyfriend that we need button quails when we get a bigger apartment....)
[Furaffinity] [Twitter]
I have the attention span of a grape.
​

Volvom said:
I didn't find with search any thread about this, but if there is already somewhere one or more, sorry about this.
Click to expand...

This is my dog Here's my two cats, the one in front is rogue while the one in the back is Saul One of my pet giant Australian huntsman spiders. 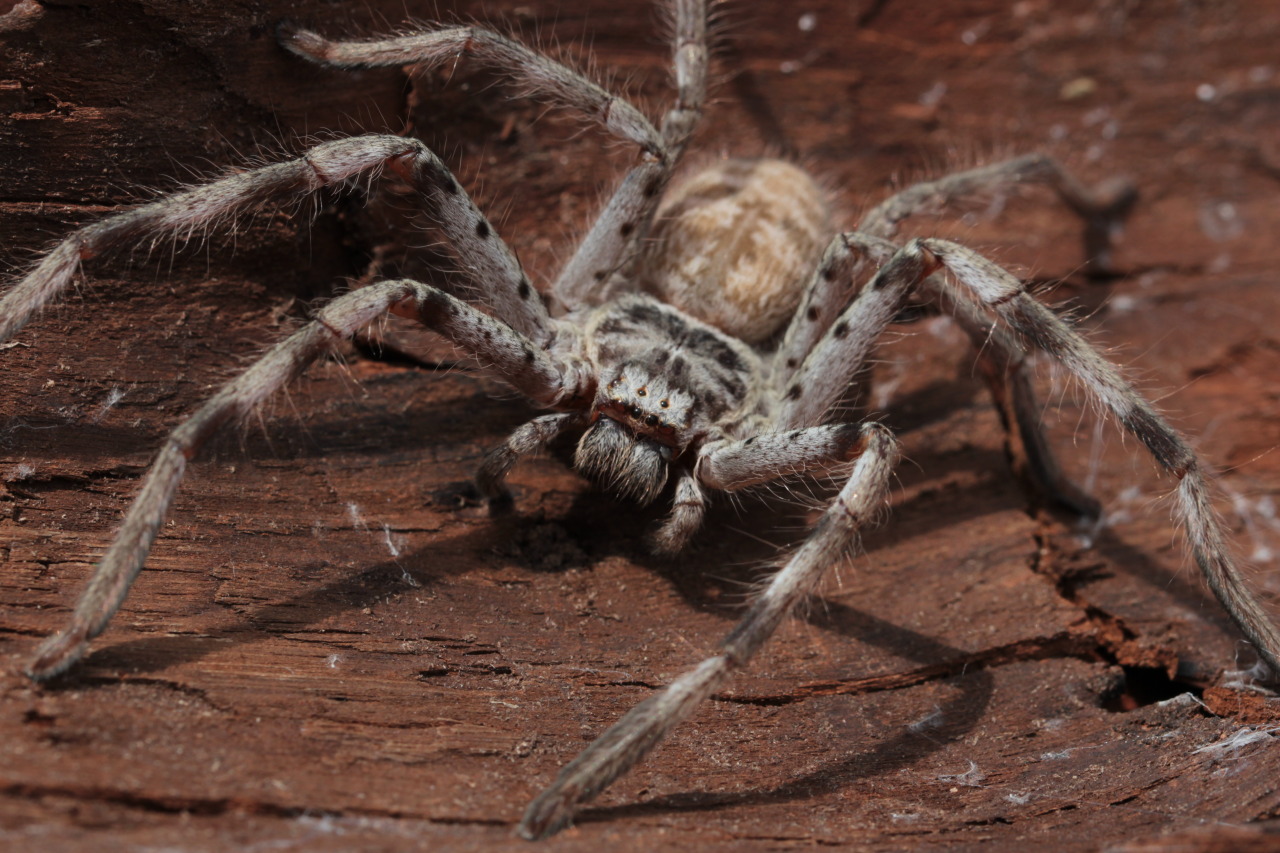 "The only me is me. Are you sure the only you is you?"

This is Juanito, my 12 year old poodle (who is strong and healthy despite his age). He is affectious like no other dog, but quite moody!

This is Pérola, my female dog. We adopted her a few months ago. She was abandoned for two months in the woods in the town's outskirts. The vets say that she is 4 years old and that she already had offspring at some point in her life. Nevertheless, she is still the sweetest dog you can ever meet!

Going to the park!
Been in the fandom since 2007 but just started participating in it recently... Looking to get to know more furs!

Kioskask said:
As an Arachnophobic person, this deeply disturbs me.
Click to expand...

Me too... How can anyone have a spider as a pet?
Been in the fandom since 2007 but just started participating in it recently... Looking to get to know more furs!

I have three dogs, two cats, and two turtles.

Teddy the chihuahua mix, Baba the Pitbull, and Mr. Wiggles the miniature pinscher. My two black cats are Juno and Eve, short for Evette. Then my turtles are Race Car and Space Ship.

Quetzalcoatl the normal ball python, my first snake from a big box pet store. I know that mistake now, hehe, but at the time I was unaware. He's a big lump, and for as unassuming as he looks; the repeat offender biter of them all.

Kuzco the mojave ball python; bought from a local breeder. Teeny little thing. Must have come from particularly small stock-- for his length, his weight is fine and he is an extremely enthusiastic eater, but he's just tiny!

Inca the boa constrictor imperator. A rescue from a place who had no idea how to take care of him-- sometimes, the husband dunked his head in beer. ): He was only fed twice monthly since he was an itty bitty hatchling, so his growth is really stunted. However, it's been almost two years in my care and he has bounced back from his emaciated state immensely! A curious and silly little thing.

Samara the Dumeril's boa. Came from the same household, but was never handled because she bit once as a hatchling. I don't know much about her backstory, apparently she originally was used in.... bellydancing shows?? She's about 5'5 in length now and hands down one of the most gorgeous snakes I have ever seen. Unfortunately, she is very "look, don't touch!" and does not tolerate handling very well (I had tried hook training her and everything). So now I just let her have her space and take her out only for cleaning and medical reasons-- she makes a gorgeous display animal, with some interesting behaviors to boot.

Ramen Noodles/Rozek the leopard gecko. Also not big on handling, another rescue from a lady up at App who didn't want him anymore, kept him on sand and he was impacted. One of the most finicky leopard gekcos I have ever met when it comes to food. >_> Gotta rotate everything just precisely. Gotta wiggle it juuuust right. Has to be at the right time and the right star alignment or he will turn his nose up and crawl right back into his hide.

Luna the blue Pacific parrotlet. Boy, does she have an attitude! One minute the sweetest and cuddliest little bird you can imagine, the next she is chewing you out. I love her. A rescue from my uncle and aunt, who could not keep her anymore because they couldn't give her the constant companionship she needs.

Fluffy the dog whose been with me since I was eight years old, and then we have the rescue cats Mothman and Bree. Also a shitton of fish.

Soon I'll have an IJ/jungle carpet python, whom I'm thinking of naming either Congo, Maya, or Java. Also I have my eyes on cave racers and blood pythons.
" two feasts, mr. hyena missed out ! " -- yawo proverb ​

Harbinger said:
One of my pet giant Australian huntsman spiders.

I have two beautiful kitties~ 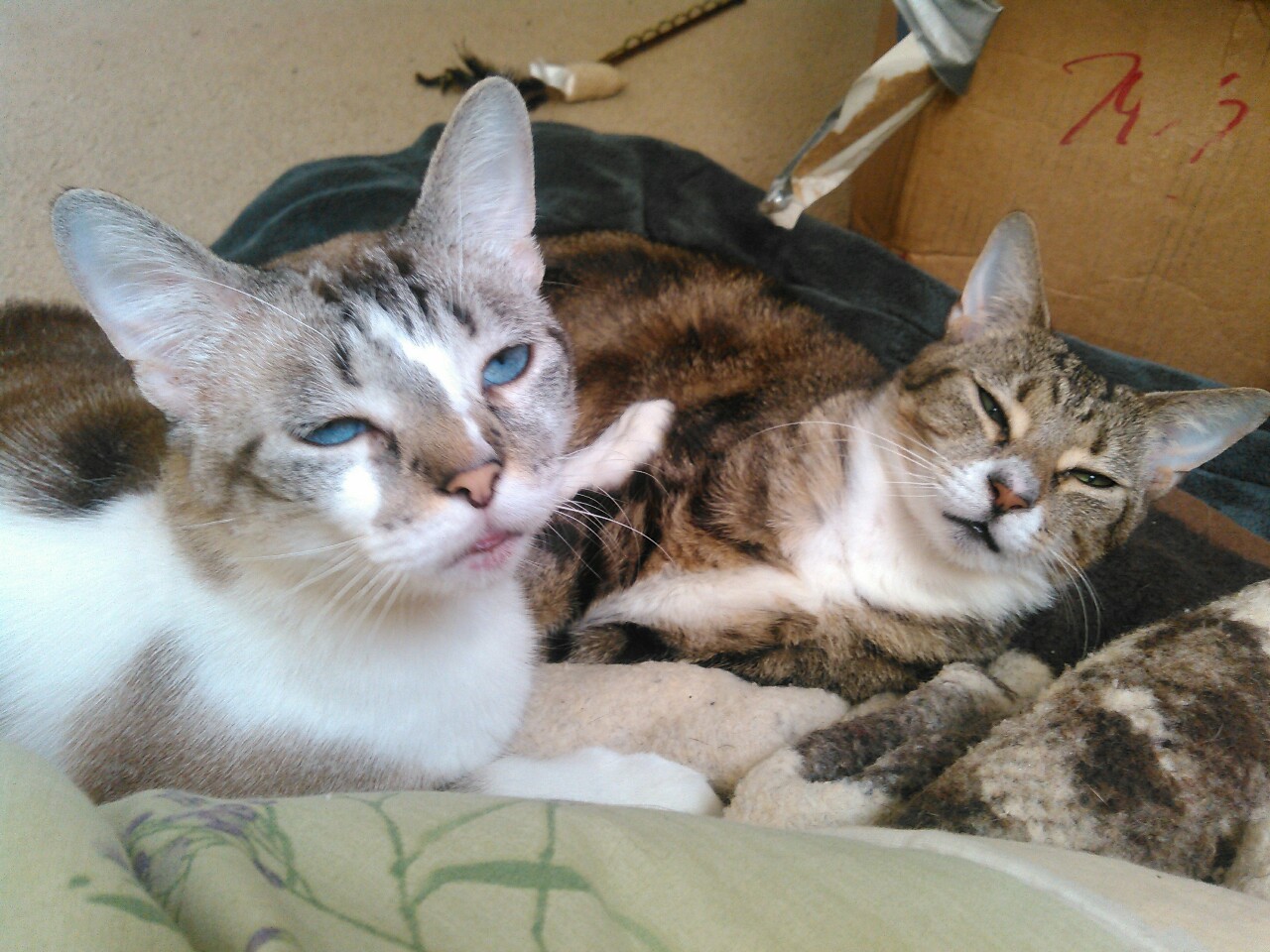 Currently have two dogs. Smaller one is Dexter, a 3 year old mix of breeds i cant remember. The other is Desmond, a 9 month old purebred chocolate lab.
Both are complete idiots but lovable ones.
What does the fox say?
"Unintelligible vulpine noises"​

LOOK AT ALL THE ADORABLE BABIES. o3o I love pets SO much.

Here's our family dog as a puppy. Aaaand here she is now! She's a husky/malamute mix. Her name's Ranger, but I call her Dog Face.

I want your husky!
What does the fox say?
"Unintelligible vulpine noises"​

You can come play with her sometime. I'm sure she'd LOVE the attention.
Ain't no party like a turtle party, cuz a turtle party has endless pizza. ​

VanessaVanGogh said:
You can come play with her sometime. I'm sure she'd LOVE the attention.
Click to expand...

Hmmm. Now i just have to justify flying to Arizona to pet a dog.
What does the fox say?
"Unintelligible vulpine noises"​

FoxInTheCloset said:
Hmmm. Now i just have to justify flying to Arizona to pet a dog.
Click to expand...