AdelynBlair said:
I feel like you enjoy gaming then that is all that matters. I am probably pretty bad at gaming but I enjoy it so that is all I care about.
Click to expand...

Thank u you are awesome.

Snowfurry360 said:
Thank u you are awesome.
Click to expand...

i like killing people and long walks on the beach.

as long as you dont teabag or rage in a mic, you are not a bad gamer.
L

ariamis said:
as long as you dont teabag or rage in a mic, you are not a bad gamer.
Click to expand...

My professional opinion is 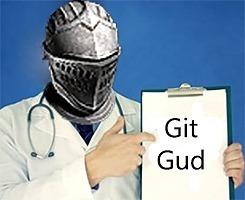 As long as you enjoy the game you're playing I don't see a reason to fret about it. Ive been playing GTA Online for years now and theres always gonna be those assholes who can kill you with one shot from a 9mm over 500 yards away. Just remember to have fun!

The really tired one....

No such thing as a bad gamer. you just have different specialties and preferences.
For instance, I play mostly shooters. I'm really good at the Destiny, Battlefield, and Tom Clancy franchises, but you put me in Call of Duty, and I start having problems... I can be average, but I have to adjust myself to little things like, different colors, different maps and such. Destiny, I've played a lot of, so I know where the spawns are, what routes people are most likely to run on, and the layouts of the maps, as well as escape routes in case something doesn't go my way. Also, repetitive playing will also let me know when the enemy will shift sides, so I don't get attacked from behind. Despite this, it doesn't mean I'm good all the time. There are days where no matter what I try, I can't get good stats, and always wind up at the bottom of the scoreboard. I'm usually a fair hand at other game genres, but usually, a rule of thumb, especially if you just bought the game, is to just get used to it. Some people are "better" usually when they have played a while and know where the spawns are, the control scheme, the games nuances and the layouts of the maps. The most important thing? If you enjoy it, it doesn't matter if you're good at the game or not. that's why it's there. To have fun.
My page.....Userpage of shadowblackwolf5 -- Fur Affinity [dot] net
You must log in or register to reply here.
Share:
Facebook Twitter Reddit Pinterest Tumblr WhatsApp Email Share Link
Top