Hello!
My name is Alex and I'm the creator of N.U.T.Z. abbreviated for "Never Underestimate The Zardans". N.U.T.Z. is a non linear action platformer game inspired by the classics such as Megaman and Metroid.
In February of 2016 I was denied from entering my university program for video games. I decided to say "screw them" and set off to make my own video game. I went to work full time and financed this project.

I currently have a core team of 4, me and 3 others included in the making of this project. We wanted to give the player a lot of freedom so the character on screen can freely aim and attack in a 360 radius. We currently have 2 unique player characters with plans to include more.

I always enjoyed exploring stages and finding secrets or bits of world lore. I wanted to see that in my own game so you'll be sure to explore and find these places in the game. Some parts of the levels will only be accessible by certain characters, or with certain upgrades, making a playthroughs on a stage very different.

I've always enjoy epic stories or over the top scenarios. In my mind I wanted a story involving furry creatures and space invading Dinosaurs.

Planet Zarda had long forgotten the horrors of war and instability and the planet has essentially become a utopia and has downsized a war time ready military to a peacekeeping force. Unfortunately this would yield unforseen consequences. The arrival of the Saurian Horde from outer space overwhelms the planet's defense forces. They're here to in a sense of the word eat the planet and everything on it. TIt's up to you to save the inhabitants and reorganize the planet's defense force. 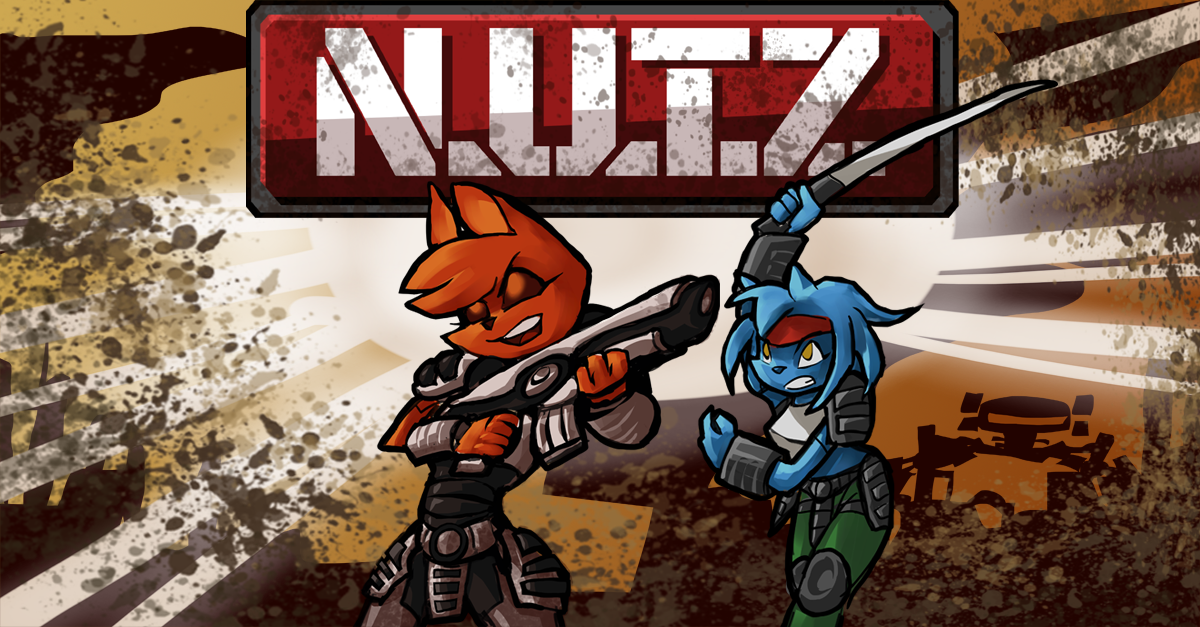 If you are interested in knowing more or want to keep up to date with us head over to our webpage. We always enjoy making new connections with our community.

Visit our website: nutzgame.com: N.U.T.Z. | Home page
Wishlist us on Steam and play the demo: store.steampowered.com: N.U.T.Z. on Steam
Follow us on social media: https://twitter.com/NUTZ_game

This looks pretty damn cool! Headin' to bed nowish but ill check out that demo when I'm awake n at em.

PolarizedBear said:
This looks pretty damn cool! Headin' to bed nowish but ill check out that demo when I'm awake n at em.
Click to expand...

Thanks! Sure, feel free. If you've got any questions I'll be more than happy to answer them
S

Wow, that's actually pretty dope. What engine do y'all use? Will there be any sort of co-op?

Sealab said:
Wow, that's actually pretty dope. What engine do y'all use? Will there be any sort of co-op?
Click to expand...

Thanks! We're using the Unity engine to make our game. We've built our own tools and assets from the ground up. We've get co-op as a stretch goal listed on our Kickstarter. If you check out the website there should be a link.

We've posted an update across all of our platforms:


It's been a while since we touched base. We wanted to let you know that while much has happened, we are still moving forward with the game and there will be new things to be excited about.


From Kickstarter we've received invaluable feedback and the team has been working furiously to fix the various short comings of the demo. Next week we hope to deploy a new updated demo. This new demo incorporates a significant optimization increase which will allow the game to be played on some lower end systems, and more smoothly. We also successfully migrated the engine over to Unity 2018! With this
new version, we've gained some amazing Unity-made tools for the game which will help us make it even better than it was before. The migration
was smooth so we won't have to spend time updating code in order to make the game compatible.


The miniboss has been changed to better allow for an equal challenge to both characters. The miniboss will now be taking aim at the player and we've simplified this pattern down to 2 attacks. Expect to see the miniboss come as a regular enemy in later levels with new abilities to challenge the player.


The boss is currently in the process of being reworked and we will have more information coming on that next week. Some of the changes that have been made include the arena which has been flattened out and made smaller for a more focused fight. New platforms were introduced that are temporary and will cause the player to be moving around the arena instead of staying in one spot.


We're looking forward to expanding our community in order to better focus on our engagement. We will work towards this objective by having a dedicated community and marketing specialist. We realized this because our current efforts fell quite short of our intended mark.

It may have seemed quiet this week but we were working diligently analyzing recent results in order to better reorient our game plan.


We will be ramping things up in the coming weeks and hope to get a new demo out soon as possible with all the intended fixes. Thank you for your patience with us, and as always, feel free to leave a comment or show this campaign to your friends.