Just like i say: whats your favorite snes game? Mines sword of mana

Mario Paint. Whipped up my old copy and SNES mouse, and painted this. 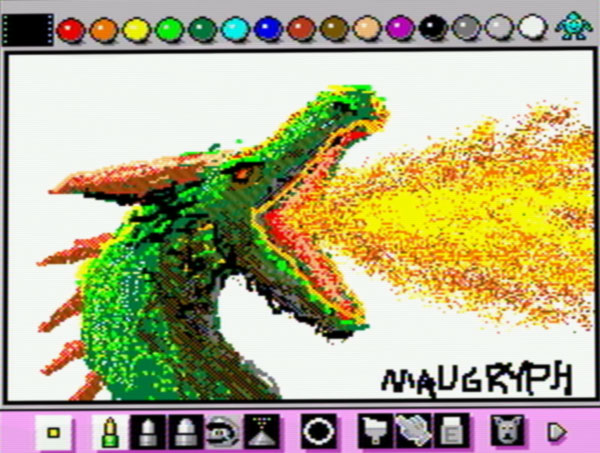 My hand is very sore from holding the mouse too tightly.

Super Mario RPG: Legend of the 7 Stars. So many fun secret things to do in that game C:
Every time a vampire says he doesn't believe in lycanthropes, a werewolf bursts into flames.

Super Castlevania IV. I love having a lot more control over the whip and the music was beautiful.

GarthTheWereWolf said:
Super Mario RPG: Legend of the 7 Stars. So many fun secret things to do in that game C:
Click to expand...

This, Bowser is playable is just awesome. (And I like his special and stats too)

I have a lot of favourite but it's so long that don't remember game names, and I pick one so...
The Great Battle (something, it has Gundum, Masked Rider and stuff), including Bomberman-like spinoff.
I'm Thai, and I'm sorry for my grammar.

*rambles on for hours because the SNES was like, the best gaming device ever created*
-Under Construction-
​
P

Link to the past definitely<----- only SNES game i ever played >.<
Bowser? He looks like a cheap movie monster- solid Snake
Who are you calling pinhead?- Pinhead Larry

Super Mario RPG: Legend of the Seven Stars. (I'm sure I've got a personal top ten list around here somewhere...)

Kirby Superstar and Super Mario RPG are both very close though
WEOW!
M

Every Rockman game(yes, including Soccer), Mother 2, Castlevania 4 and Sunset Riders.
Dat Konami jingle on bootup makes my heart soar; more so than Capcom's.
Check out my FurAffinity gallery and webcomic!

I must say my favorite snes game of all time is Super Mario All Stars!

But damn, there are so many great games on that system. Not that I grew up with it or anything <.<
"Look at you. You're so superficial you probably judge others by their physical appearance."
My FA || Streaming

I'm gonna have to say Final Fantasy III (VI originally)! But like BadRoy said, there's so many wicked games for the SNES, it's really hard to choose. D: Zombies Ate My Neighbors also tops for me, but it was one of the first games I ever played so maybe it's just nostalgia fuelin' it (still recommending, though!).
â˜® Â» "Look forward with hope, not backwards with regret." Â« â˜®
​
You must log in or register to reply here.
Share:
Facebook Twitter Reddit Pinterest Tumblr WhatsApp Email Share Link
Top