Hello every furry (wow that was cringe).

I am super duper proud to reveal something I’ve been working on and brainstorming for a while, my first original/open species, the Jagulin! 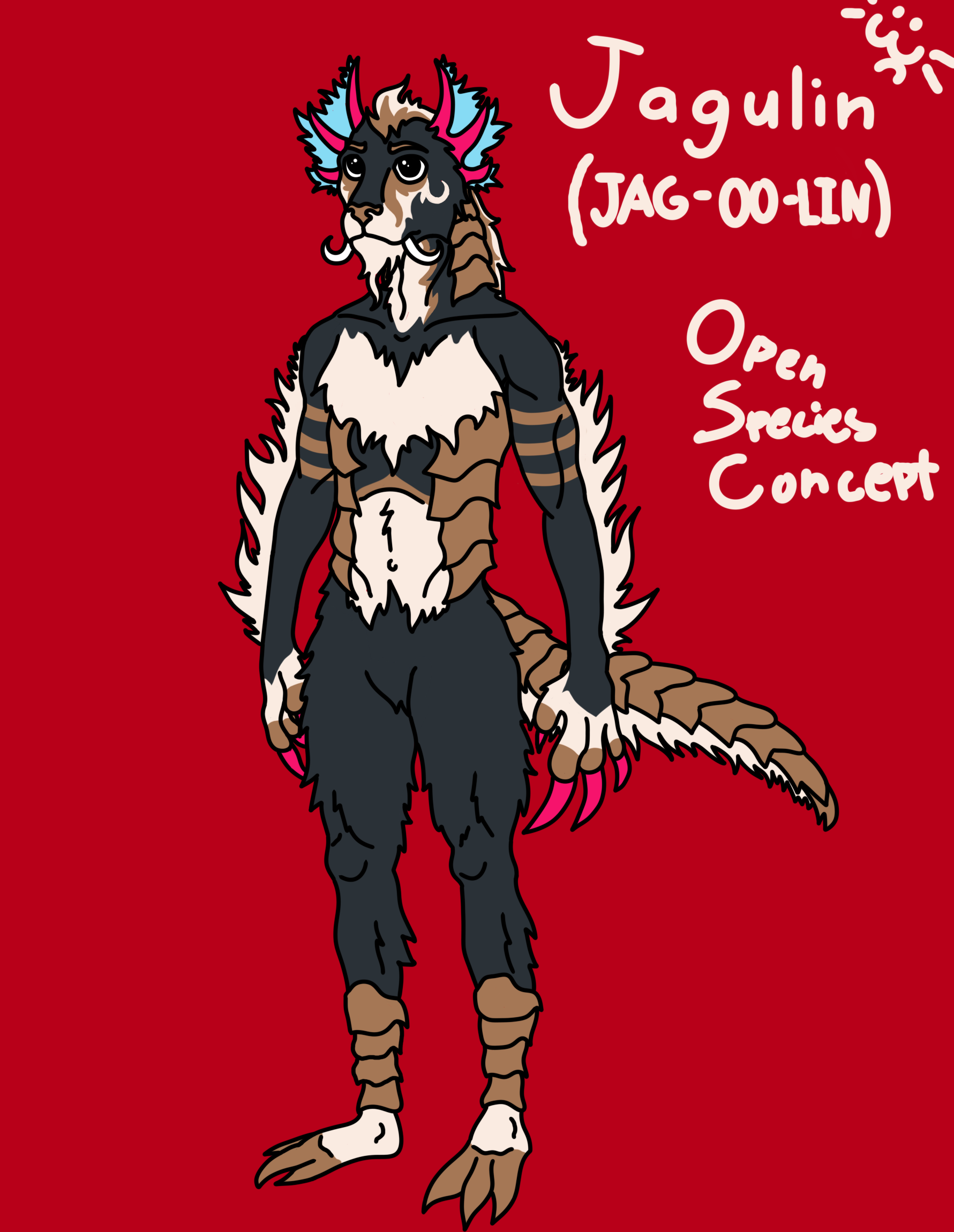 Here are two process shots as well for proof of ownership: 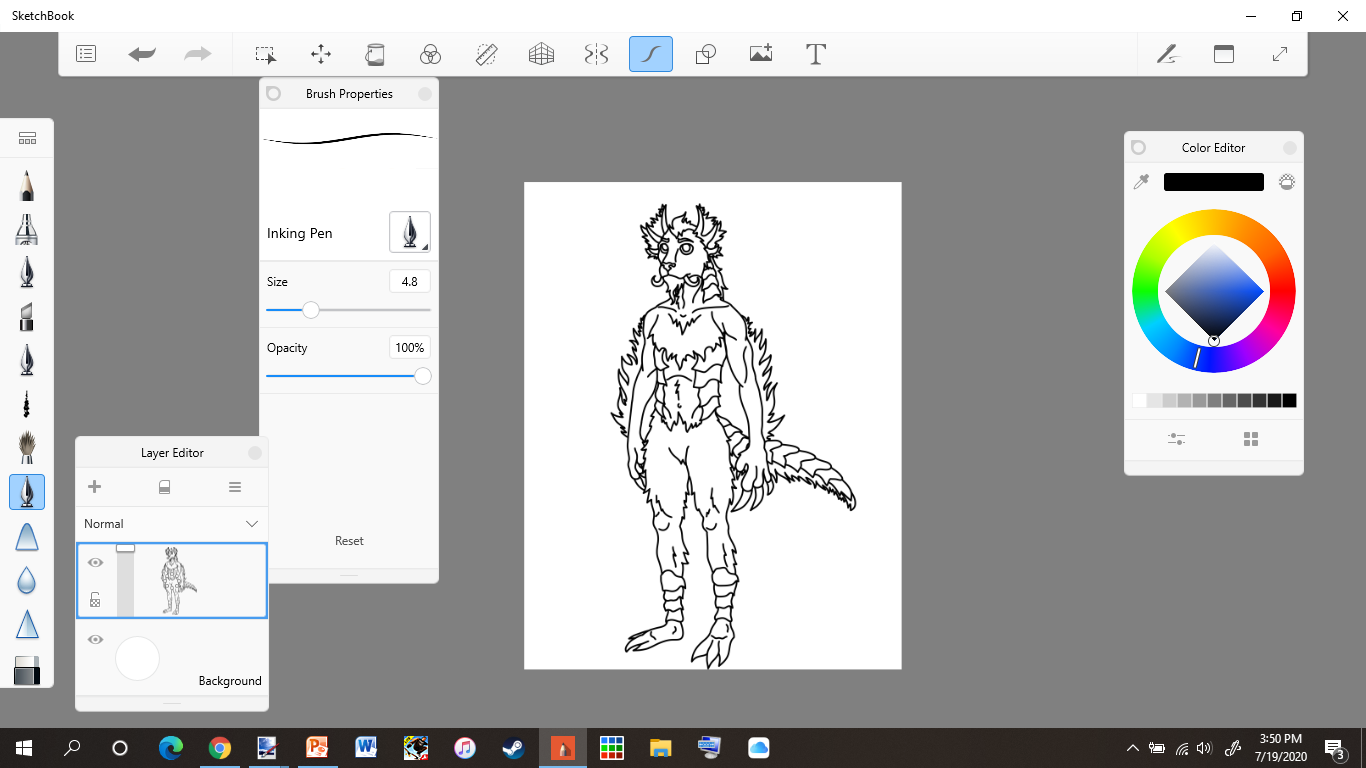 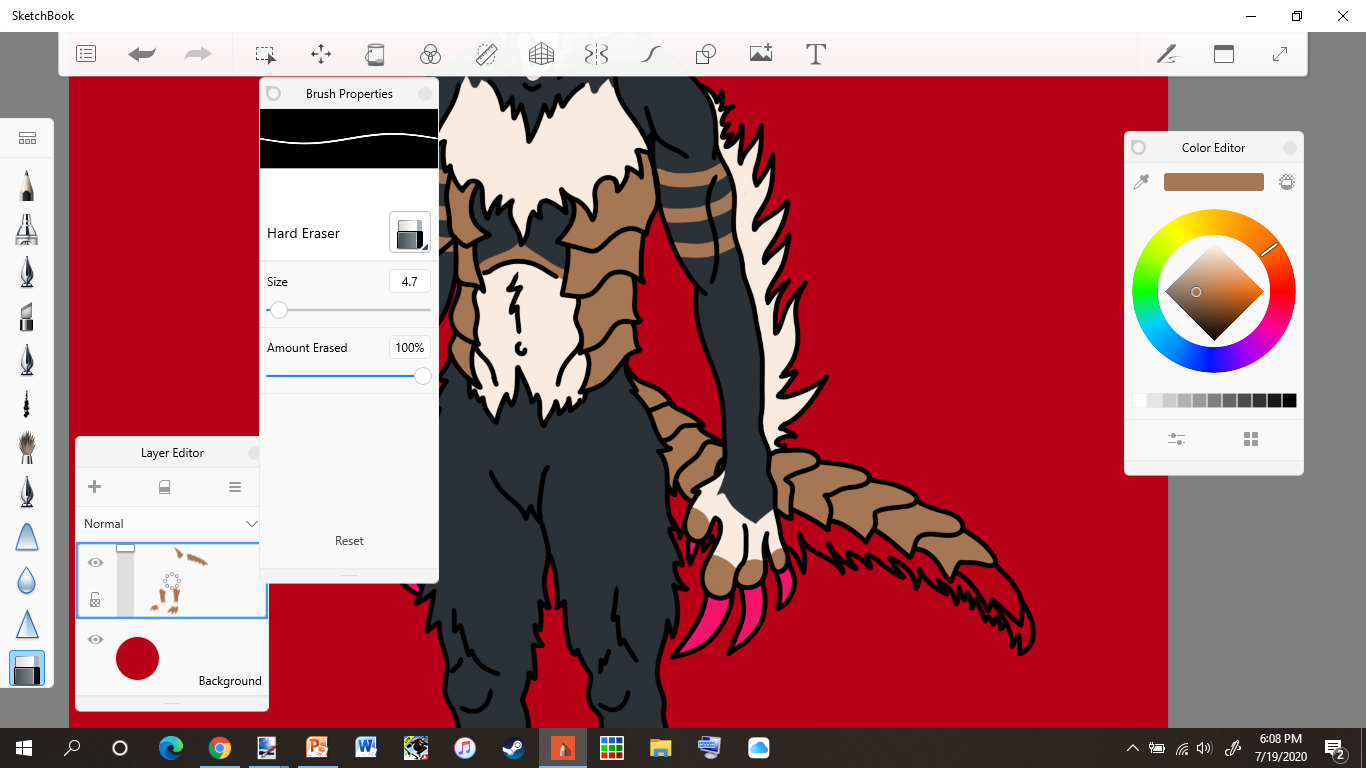 I suppose I should start out with a long blurb of information. This is an open species, but I do have a few guidelines and regulations that help when creating a character, especially if you’re trying to stay true to my original intent for this species. However, whether or not you choose to follow my lore is up to you.

Jagulins have many different features that define their appearance. First, Jagulins are genderless. They do not have any sexual dimorphism, however there are traits that differentiate some Jagulins from others. When in anthro form, if we’re comparing them to humans, their bodies are masculine leaning/androgynous. Most Jagulins are slim, with slender shoulders and wider hips. But Jagulins can come in all shapes and sizes, and the most common body type does not apply to all of them. Jagulins do not have nipples, breasts, or genitals, as they are sexless. Their chest is essentially just one giant wad of floof.

Jagulins can shift between anthro or feral forms if they desire (I do not have a feral reference right now, although that is in the works). Jagulins have feline/Jaguar like skull structure. Their eyes are ALWAYS black, and they have very large pupils.

Their ears are three branches, with fur attached to each “branch”. The way they can hear is by the sound waves getting “trapped” in the fur, and then transferred through the branches to the nerves. Kind of like an antenna, so to speak.

Jagulins are herbivores, despite the threatening appearance of their tusks. The teeth inside their mouths are more similar to other plant eating animals. Tusks can come in all different shapes and sizes. Generally though, stronger/older Jagulins have larger tusks, and weaker/younger ones have small tusks. A juvenile Jagulin is not considered to be of age until their tusks grow in.

Every Jagulin has a mane that travels from the top of their head and all the way down their back. Manes can be styled in any way as long as it remains similar to a Mohawk. Manes are always two toned in color, with the lighter color going on top and the darker color going on bottom. They also possess a very long tuft or fur on their chins. This can be braided or free hanging.

This species has a very interesting feature on certain parts of its body, keratinous scales, or plates. The plates wrap around the neck on both sides, partially around the abdomen on both sides traveling fully around the back, on the top of its tail, and lastly on the lower parts of both shins. The plates are large and hard, and serve as protection for the Jagulin’s most sensitive areas. If the plates were to be punctured, one would most likely hit a major artery.

Jagulins possess long tufts of fur on both arms. Some like to call these “pseudo-wings”. The arm fur is typically the same color as the mane, but not always. Similar fur can be found on the underbelly of their tails.

Jagulins have rather large paws, with four fingers (thumb, three fingers). Their claws are also extremely long and large, similar to a sloth’s claws. Their feet are more reptilian, or avian in nature.

As for coloration and fur patterns, Jagulins are typically striped, and their bodies follow neutral/natural color palettes. The only colorful parts of Jagulins are their ears and claws. The more colorful and vibrant these two features are, the more likely it is that the Jagulin will attract a partner. Ears and claws come in all sorts of wild color combinations, the more colors the better. However, the body is usually muted in color. It is exceedingly rare to see a Jagulin’s body colored with any color that isn’t found on most animals in the real world.

Anthro Jagulins can have as many tattoos as they want and wear whatever they want if created as a character. They do not belong to any specific universe or time period.

And for some other useless facts that don’t have anything to do with their appearance:

-Jagulins are usually partners for life, but they can be polyamorous

-Jagulins reproduce in a rather interesting way. One partner will fashion a nest out of shed fur, while the other creates an egg out of rock. The two will place the egg in the nest, then they both place their hands on the egg. The partners then transfer equal portions of DNA in a special life giving ceremony that lasts for up to 15 minutes. Then the couple will take turns incubating the egg for the next month until it hatches.

I am planning to make a F2U base for these eventually (Front, Back, and feral mini), but unfortunately I do not have it at this time. (The base will be free to use for personal use, however, the only one who will be able to sell adopts with it is me. But you are free to create your own base and adopts of the species as long as you adhere to the guidelines)

However, you can still create your own Jagulin in the mean time! I would only ask that you read this first. And here’s a little image to help you out:

You are free to be as creative as you want with it! If you are unsure of anything when making one of these, don’t hesitate to DM me.

(Just please avoid doing the exact pattern/coloration of my example picture, they’re my first and only Jagulin character.)

That being said, I need your help. I am not a popular artist. Most of my posts only get around 4-5 likes tops, and half of those are not genuine. So if you like this idea, and would like to have a free species to add to your collection of characters, please help spread the word! Post this to your own page, post it to twitter, even a like or any engagement is appreciated. Also, if you’d like to use the free base as soon as it comes out, comment or DM me, and I’ll add you to a list so you’ll be the first to know when I have it (I’ll specifically email you it as well if desired).

If you create a Jagulin before the base comes out though, tell me! It would make my day to see what all of you creative peeps come up with. Feedback is always appreciated.
Kowabunga Kangaroo! Everybody hang loose.
​

I can't wait to see the base, and what people do with it!

I can't wait to see the base, and what people do with it!
Click to expand...

Ahaha, smart one huh? You got at least three of the species that inspired me right :3

I can’t wait to release it! And if you’d like to use it, I can personally message you when it comes out.
Kowabunga Kangaroo! Everybody hang loose.
​

This is a really cool concept!
"In his house at R'lyeh dead Cthulhu waits dreaming."

Renyard2001 said:
This is a really cool concept!
Click to expand...

Why thank you! I’m hoping that this idea will take off once I release the base.
Kowabunga Kangaroo! Everybody hang loose.
​

RangerReb said:
Why thank you! I’m hoping that this idea will take off once I release the base.
Click to expand...

I hope it takes off too
"In his house at R'lyeh dead Cthulhu waits dreaming."