^ Those are mine! As you can probably tell I like the cutesy ones more than the "cool" ones, which is probably why I ended up liking Pokémon over Digimon. One of my top favorites is Sylveon for personal reasons.

(It comes in English, Spanish, German, French, Italian, and Japanese, I just used Japanese because I'm learning it :3)
cringe
F 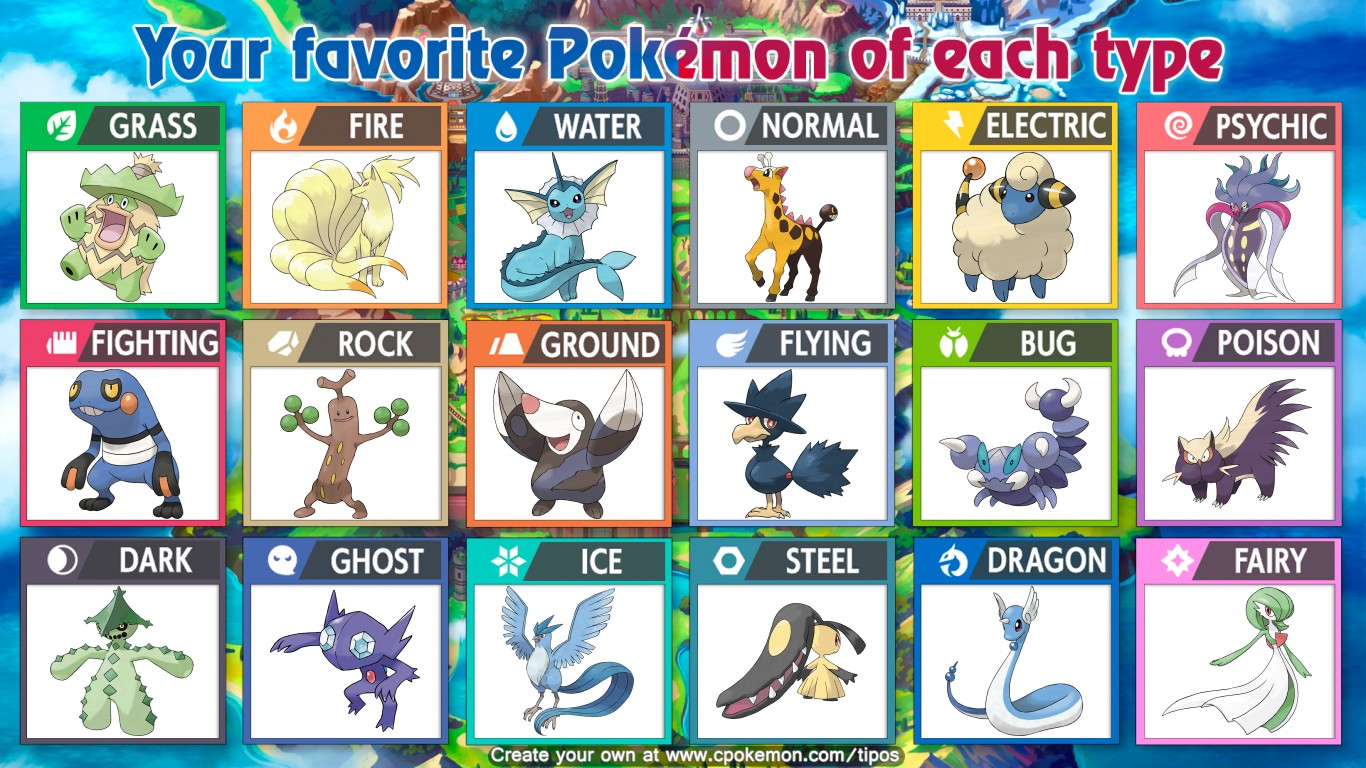 I'm more an OG kind of person. Though some of the newer 'mons are interesting. This was a really difficult set of decisions. You can very much tell from the image that I'm pretty much mostly Gen 1 & 2. I mostly missed out on 3 and 4 (only recall some of them from Mystery Dungeon Red), had a little group in college for 5, and have not been near enough people to bring myself to play any other versions.

Back when I used to build teams in Gen 1, Cloyster, Mewtwo, and Parasect formed half of my primary team. (The rest were Electabuzz, Arcanine, and... I believe Golem was the last one. About as much type coverage in their movesets as you could get in Gen 1 what with how weak Bug-type was back then.)

Torterra's a recent update thanks to Detective Pikachu (I probably would have picked Bulbasaur otherwise). Red Rescue Team is where I get Skarmory from. I think Timburr might have been in Gates to Infinity.... the oddest one out is probably Zebstrika, as I was seriously thinking of putting Emolga there, but something about Zebstrika's design.

Drilbur was tempting for a Ground choice, but some time ago I decided that if I ever had a Pokesona, it'd be Sandslash. (I originally considered Persian for that part.)
Is it really hoarding if you're not at the top tiers of resources?

Too many to post.
25 year old, indecisive wolftaur from Thistlewood he is friend shaped
25 year old, indecisive wolftaur from Thistlewood I panicked trying to remember.
T I think my hardest choice was grass types.
Most of them suck. Just like most Dragon types.

Otherwise I knew exactly who I was picking, luckily Incineroar was Dark instead of Fighting so I can have all the good boys and the two only acceptable felines I'll ever remotely like.

Not a fan of most bug types, but I had to go to the one who has the best cry.

Noivern. Such a cute little bat.

These guys were hands down my favorite after they carried me through a nuzlocke of Sword:

Of course I love Joltik too. c:

i am always a sucker for ground types, and my all time favorite Pokémon has to be cubone! Though bronzor is a close second c:I have a mix of old and new favs though I'm a huge sucker for Water- and Dark-type Pokemon, as you can see.

"Life is the ultimate video game. You just don't have unlimited continues, that's all." -Dante, Marvel vs. CAPCOM 3 The Sinnoh Trio is my favorite batch of Legendaries to date (with the Hoenn trio close behind, then the birds). Other then that, my preferences are all over the place. If it looks like a dragon, dinosaur, or bird though, chances are that I‘ll like it.

Breloom is my favorite though, I love that mushroom child ~