As the title says, I'm trying to practice drawing different species, complex backgrounds, and dynamic poses. I'm getting bored of my art where everything looks the same and I'm having the urge to draw any species I can (except for humans) to practice my realism skills (and proportions/semi-stylization) but am unsure where to look (without running into creatures I may be phobic of), so I'll be offering requests.

https://share.icloud.com/photos/0IuWNOM663mBJKCu_5r4eaEUAI’m really nice once you get to know me

Thanks for a chance! Say, would a demon perhaps be fine? ^^

Character - Tommy the Demon by EmeraldWuff

Tommy seems to be another demon from the dark underworld. However, he's not as dangerous as he looks. He's actually a very fri ...

When it comes to the scenario, perhaps he'd be fooling around or just chilling. I'd rather give you some freedom for ideas with him, as long as it fits his personality. SFW only ^^

I want to be on a beach
https://share.icloud.com/photos/0IuWNOM663mBJKCu_5r4eaEUAI’m really nice once you get to know me

Heya, I have a background and this rattlesnake if you want : Derenus always liked Western despite she is from Radratacen.. . There is another version on how I built her body <3 :. . https://sta. ...

Here are reference of Derenus Heeled boots.. I add this as new reference. . . I am planning a draw for this oc. Ever done a Bearded Vulture before?

Recently redid her ref sheet.
I think she'd suit a more laid-back, reclined pose. I can see her wings acting almost like blankets I lost my stylus for a while but I found it and decided to finish a project I'd been having trouble with.. . Tweaked her design, to ...

You've done some interesting species! Leopard Seals are a personal favourite of mine.
https://www.furaffinity.net/user/biscuitsboy532/

The_biscuits_532 said:
You've done some interesting species! Leopard Seals are a personal favourite of mine.
Click to expand...

I've got two here who are a bit different than the usual, if you're interested 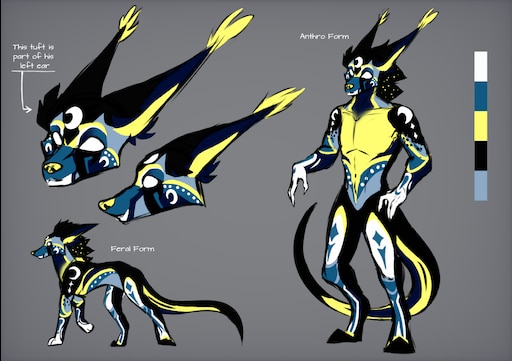 steamcommunity.com
And second, Morag, a wolfdog with long fur 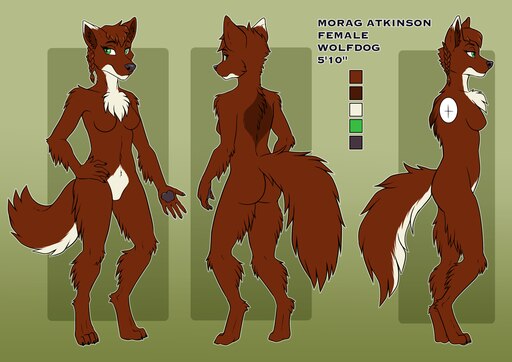 steamcommunity.com
"Any technology, no matter how primitive, is magic to those who don't understand it." -Florence Ambrose (Freefall)

These are all female fursonas who represent different sides of my psyche! Solo 'em, group 'em, do whatever you can create~!

Thank you so much in advance! It is fun to see your style.

Have a magical day~

I'm kind of a schoolaholic dragoness/owl/cat girl taking 6-8 courses a semester. That's why I'm happy to see artists draw my characters, and it's an insightful and enjoyable experience for both parties--while I make everyone proud at school. Thank you everyone~!
(❁´◡`❁)

Maybe you could try to do my fox/wolf hybrid Ahrakas? Im envisioning a blue and white color scheme for his fur. Maybe draw him in a throne room? Here is what I have for inspiration:

Last edited: Apr 2, 2022
"All journeys must come to an end, but this time, there is a new beginning as well. There will be challenges to face and enemies to fight, but I know you will overcome. All that has gone before, my friends, has only served to give birth to this new day. Let unity, duty and destiny be your guides. Be well, be strong, care for this world and for each other. Farewell."
—Mata Nui

Would love my girl Mok'ka to be drawn in your artstyle!
I'm curious as to see what others portray her of.
Reference: Character and art belongs toKotaroAkatsuri. DO NOT REDISTRIBUTE. PLEASE CREDIT IF USED AS A REFERENCE.


Pose references: [NSFW WARNING] if any of these piqued your interest. Mok'ka is non-binary (she/they) and can be shown with different parts.
Profile pic by Skeewomp!
My FA page! | I also do sketches from time to time!
23, ENBY (She/They), Chef, Artist, Bunny Babe, Engaged-To-Be but Open To In-Character Roleplay!

How about my tiger Feraku? NSFW would be perfect.

Willing to draw my OC, Embrafillowy? I do have some art of her in my gallery, although I don't quite have an ideal reference image.

Fur Affinity | For all things fluff, scaled, and feathered!

www.furaffinity.net
This art of her shows off her appearance well.

Gift/Request art of my OC, Embrafillowy, by feralfamiliar , for my birthday ! Maybe go check out that kind soul & give 'em supp ...

www.furaffinity.net
(Although, the fluff on her chest & crotch isn't present in that art.)
Hopefully she's to your taste, but if not, that's fine, too!
If you have any questions, please, feel free to ask! I like indulging to divulge about my character!


Jumping on a bed.
Bent over to look down at someone shorter.
Falling over from a light impact.
Pulling out an implausible object from her pouch. For example, a fridge, a bed, or other things unlikely to fit.
Hopefully I'm not a bother! Obviously, even if you don't draw her, that's fine! I'm just thankful for this opportunity!

How about my cat in a SFW setting, drinking Coca-Cola in a can with a straw?

You can do Mine if you want. I don't care if it's SFW or not.

Hello, everyone! I would like to say that I am definitely working on requests, just at a relatively slow pace since I've been working on a small painting for one of my characters (which will be done soon) & a reference sheet for one of my fursonas.

I'm already in the process of doing requests! I'm working on the sketch of at least one of them. Part of the reason for the delay is that there are so many lovely characters to draw (on here and on Toyhou.se, where I also advertised)! I'm trying to come up with ideas and compositions for everyone. The ones featuring NSFW prompts may take a little longer since I'm more experienced in drawing SFW drawings & a certain type of fetish art. This isn't to say I won't draw it at all! It's just going to take a lot of time to perfect since I'll need to study the shape and form of genitals, alongside looking at references for those dynamic sex poses. I'm working on requests in the order based on both personal interests and simplicity—this is to say, the easier prompts will be done sooner, the more complex ones will be done later. This isn't based on species, per se, but my interpretation of their design + its objective complexity and the complexity of the given (or self-created, based on personality) prompt.

I'm mostly commenting to bump this thread so I can get more requests!

Something I want to mention is that I'm hoping for more characters of unusual species, especially amphibians, reptiles, birds, paleo-creatures (including dinosaurs), cute and/or conventional fish (not deep-sea creatures or similar), and creatures such as rhinos, hippos, giraffes, anteaters, aardvarks, elephants, raccoons, etc. Admittedly, I'd also prefer more male/masculine characters (including AFAB males) since my portfolio is so full of female characters that I'm scared people think that's all I can and will draw. They can be feminine and androgynous males, too, as long as their body type is as masculine as possible, and they don't look too female. You can request more common species such as canines and felines, and you can request female/feminine characters, too, but they will not be prioritized!

Thank you and have a nice day!

(Pictured: WIP of Beanie's request! It's being worked on slowly! Don't worry, the breasts will be hidden by her chest fur soon—I tend to draw them on female characters to locate areas such as the ribcage and spine.) How bout my skull dog Hexa throwing a Molotov or tagging a wall?

Im not very good at art, but wanted to finally make me a fursona

Here is my Lanternshark sona, Colby.

-The dark parts on his body are navy blue.

-I prefer if the stripes on his socks were purple, but do whatever color looks best. His sleeves aren't meant to be that long but I can't draw hands soooo maybe shorten sleeves and draw fingerless gloves the same as socks.

-his hair is dark brown and curly, and all flows down. His eyes are brown as well.

-Maybe shorten his skirt, and make it black.

-for the pose or whatever, fo what you like or like that one famous fleurfurr drawing. You know the one I'm talking about.

Other than that, have fun! Finn ^w^ said:
[...]-for the pose or whatever, fo what you like or like that one famous fleurfurr drawing. You know the one I'm talking about.[...]
Click to expand...

I apologize, I do not know which FleurFurr drawing you mean. I had to look the artist up because I'd never heard of them and I couldn't find which drawing of theirs was specifically famous. I scarcely interact with the furry fandom at large, keeping it specific to the artists I enjoy and people who comment on my posts, and I don't tend to hop on or keep up with the latest trends, so I tend to miss a lot of things and not realize they're trends until I see it repeated (which can take a while), which means I definitely do not know what you're talking about. A rule of thumb on the internet is that it's best to assume that someone has not heard of something and explain it or link to references if possible. In this case, a reference for this pose would be highly appreciated. Thank you very much. Have a wonderful day. ♥
Also, for everyone else reading, requests are still available and I'm finally garnering the motivation to draw again! I'm immensely remorseful for the delay, I haven't even been producing anything for myself due to personal issues. I suppose I'm not prepared to accept commissions either, despite wishing to so greatly.
♥ ᏒᎧᏰᎥᏁ ᎶᏒᎥᎷᎷᎶᏗᏝᏝ ♥
FurAffinity | Discord Server | Commissions | Portfolio (1) (2) (3) (4) (5)
Survival of the fittest is what they say, but I'm surviving and I'm unfit for it.​

I gotchu fam, here it is 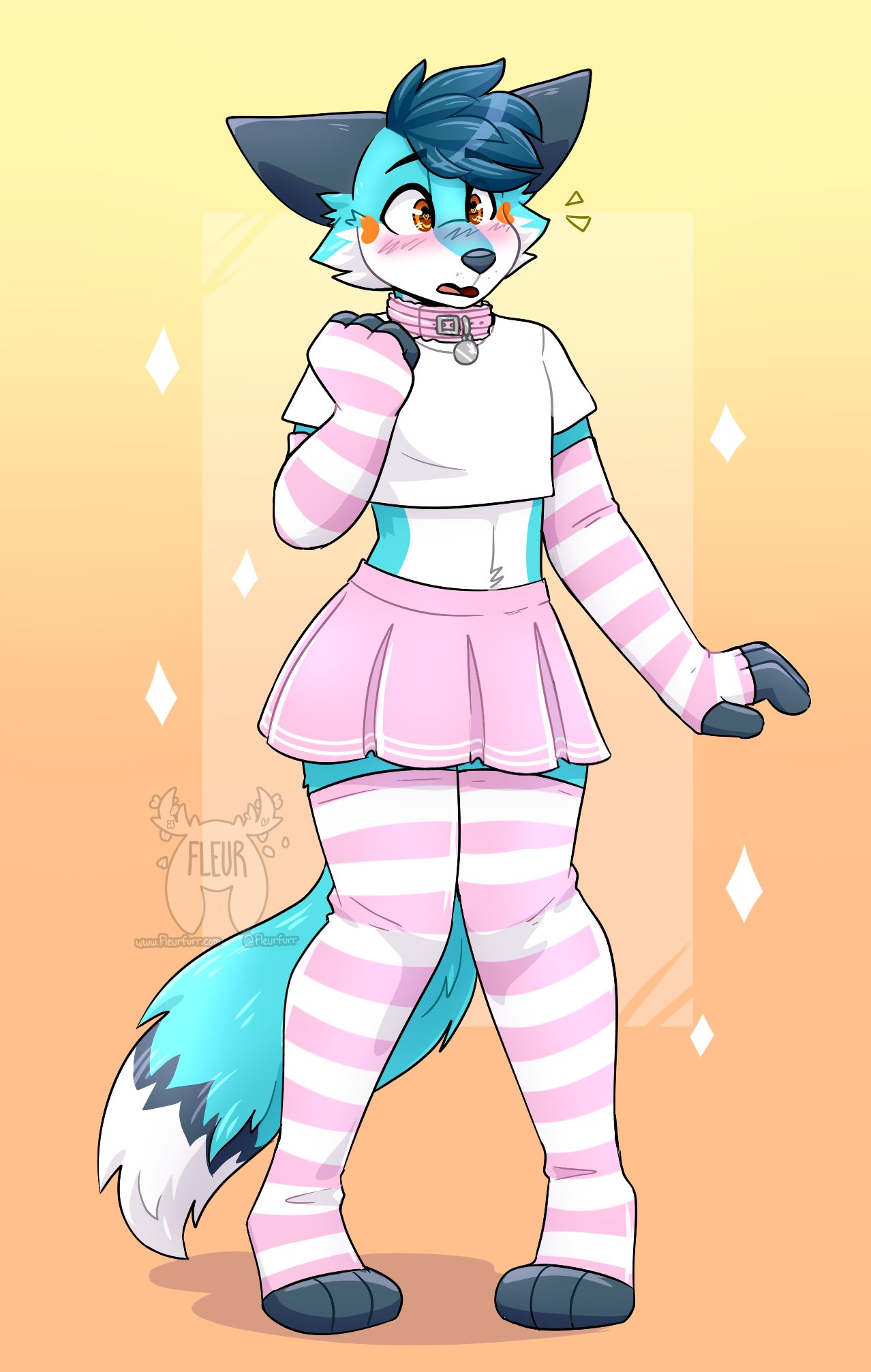 "Any technology, no matter how primitive, is magic to those who don't understand it." -Florence Ambrose (Freefall)

The_Happiest_Husky said:
I gotchu fam, here it is

See literally everyone knows it cause it's just that iconic xD
My FA page: Logan Howell

By the way, I am working on requests! Here is a WIP of a drawing requested by @Clippit! Everyone's requests will be worked on gradually. More requests are welcomed! If you're willing to do a couple, I have a frog and salamander:
Frog: https://www.furaffinity.net/view/47006081/
Salamander (WARNING, her ref has drawings of starfish, coral, and tentacles but it's all cutesy): https://www.furaffinity.net/view/47006121/
Neither of their markings need to be exact. I only have NSFW refs of them but would also love an SFW piece of them.