I'm a wee bit new to this whole fursona thing and he's still early in development so if y'all have suggestions or ideas, feel free to hit me up with them! (this is also my first post on this site; pls don't judge (>_<)

Appearance:
- Hair and fur: black and dark grey shiny fur, long blue undercut look on head
- Markings: still working on it
- Eye color: green and gold
- Other features: frayed wires sticking out from tail, ears, etc. circuit board nametag
Behavior and Personality: very curious and inquisitive, friendly but a tad shy, can be a dorky derp, despite being shy is very energetic

History: After a small, local computing business went bankrupt, 404 was left to the streets, as his owners couldn't any longer afford to care for him. He traveled away, and found a home making people laugh with his funny antics.
---
Aaand additional stuff if you want a "what's your blood type?" style bio
---

Goal: Make others smile
Profession: Comedian
Personal quote: "Heh, you make my motherboard all warm and fuzzy, and that sounds like problems to me."
Theme song: none
Birthdate: April fourth! where he gets his name
Star sign: Aries

Favorite person: Everyone, especially you!
Least liked person: 404 loves everyone!
Friends: 404 has a difficult time making friends sometimes
Relations: none
Enemies: none
Significant other: none
Orientation: pansexual

Excuse my language, but what the hell is a cyber fox?!
Swizzle Valcar
J

Swizzle Valcar said:
Excuse my language, but what the hell is a cyber fox?!
Click to expand...

Wouldn't that be a cyborg then?

It's just interesting to me how your username says you're dragon fur and your fursona is a fox. Seems you were a little hasty with creating a username.
Some things are very hard to believe that's what makes them a special little snowflake.

My fursona is called Lucid and is a Roejin (alien species), my sister designed him for me.

lyar said:
Wouldn't that be a cyborg then?

It's just interesting to me how your username says you're dragon fur and your fursona is a fox. Seems you were a little hasty with creating a username.
Click to expand...

Hah, ithedragon~ is the user I always use, because it's tied to my YouTube channel, and to be quite frank, it makes everything easier XD

Daven said:
Mine is a racoon named trash and he runs a local junkyard he always wears a denim jacket and a plain white T shirt that he tucks in to his blue jeans. He wears a leather belt with a silver belt buckle. And he wears brown steel toe work boots. He lives in a small town in west oklahoma and is also the the recreational director for his local church
Click to expand...

And i am looking for a artist that won't charge I actually did a line art of my Fursona today. This took me 5 hours xD No color or markings, but this gives a pretty general idea of what he looks like.
FA

Hero of the Union

Ima be honest here when I say that I am far to lazy to draw out my fursona, but I will give you a full bio.


Strengths: CQB combat
Favorite weapon: flamethrower
Weakness: prefers to rush into combat without thinking and mow down his enemies as fast as possible.

Favorite song: Ghost Division
Quote: "I could kill you in 50 different ways with just one hand, but I'd rather just shoot you."
The white wolf of Stalingrad He does computer stuff for work and plays games. Like me. Fuckin weird I know. Here he is getting invaded by his shitlord wife and partner in Dark Souls. Clearly he has the upper hand.
Resident RP elitist​

The really tired one.... My fella is a Chinese Crested Hairless named Felice Reinhart

Sloshy [or Vanessa if you prefer]

things to know about me.
high rank in the shy army
eats like a champ
trained to avoid being vored my a yoshi
loves pop punk and hardcore

Paragon of the Flawed

I, er, realize you're probably sick of seeing these after three pages... but, well, I suppose I'll chip in.
Here he is in all of his impossible nonglory: (God I hope that image works.)
His name is... Well, I call him Robin. His kind/species is 'Paragon' - a sort of approximation of a person's identity.
He's a wanderer/explorer of a sorts, mapping and charting the old, empty places of the world. Ruins, caves, basically anywhere where nature reigns or has retaken. He wears the scarf as a reminder that there is a world outside his own head, that there are others out there. It's nigh on indestructible and he gets anxious when he doesn't have it.
Personality: Usually quiet, contemplative, a bit neurotic. He gets sort of motormouth and goes on logical tangents when he's nervous or sees a potential joke to be made. Fond of wordplay.
Flaws: Easily flustered, Haphephobic (fear of touch), overacts in effort to impress people he likes, impulsive and quick to blame himself. Prone to overthinking and over complicating the psychological meaning of people's actions, and his own. Doesn't like to talk about himself, unless he feels it's relevant to a current issue.
Strengths: Remarkably empathetic and an excellent mediator for conflict. Excellent memory for images. Quick to offer help, however he can. Sacrifices a great deal for those he considers friends.
https://www.youtube.com/watch?v=la9GS4nd4v4
And I just nod,
And I nod because I know it's true.
And I just nod because I know I can't stop you.

Half said:
I, er, realize you're probably sick of seeing these after three pages
Click to expand...

www.furaffinity.net: Onistina Starfield by DravenDonovan Meet my female Fursona, Onistina! She be a Kitsune :3 The kind that is a demon-fox.
I'll have to try and type out more about her tomorrow. It late and I tired!
FA

Mine is my avatar shrunken down to fit xD

Name: Starbeak
Origin: An extraterrestrial space traveler who finds a planet in which to cultivate and be apart of.
Height: 5'0
Weight: est 120 lbs
Favorite food: Variety (not picky)
Favorite drink: Anything Caffeinated but no Diet.
Appearance: 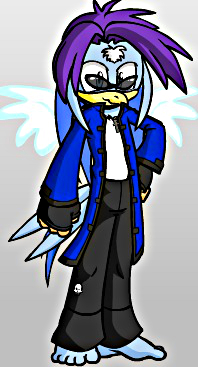 Personality:
A free spirit, likes to explore and wander the world, tranquil, and friendly.

AAAAAAAAAAAAYAAA!!! *beats up his keyboard*

I don't have a picture for him yet, but his name is Jasfit (Mega Furry). He's mainly yellow with a blue eye on the left and a green eye on the right. He has Mega Man features with helmet-like fur on his head. He has a Mega Buster like Mega Man's and a body similar to his, too. :3 But his boots are furry-shaped. ^w~
We're no strangers to loooooove!
You break the rules. And so. Do IIIIIIIII!!!!!!!!!!
:3 So far regarding design, this is what I have. Half wolf, half rabbit for the win!
>Do tomorrow what you can do today.

Mine is named Jino (hence the name) and he's a tundra wolf, he's currently a wip so that's all I got at the moment, I would already have a picture to show but unfortunately I can't draw half as well as all of you

My fursona's name is Glitch.
Sex:male
Species: Wolf
Colour: Black with green paw pads and green inside his ears
Eyes: green
Features: Glitch has a power icon over his heart with circuit lines spreading across his chest, he has more circuit lines branching up his forearms and legs coming from green bands on his wrists and ankles.When the power button is pressed, Glitch goes into sleep mode until button is pressed again.
Sexuality: Bi
Glitch is funny, caring and cute. However whenever glitch or one of his friends becomes endangered, all green on glitch turn instantly red as he enters attack/defence mode. Glitch's personality does a 180 when in this mode, he becomes more serious and responsible. Due to the personality change from this mode glitch is given the nickname 'Byte'.