Show me your sci-fi/military anthro characters and art

Hello, I would like to see some cool anthros!
Sci-fi/military is something I'm really interested in, but unfortunately, I can't find much anthro art about it.
So I would like to meet artists with similar isterests.
No NSFW please, I'm not fan of that stuff.

So here are some of my examples I use Pinterest alot for costuming tips, and there is alot of furry art that has been linked to it. Just search 'furry art' and it will bring up a ton of different styles, including some that are military/scifi. (Those styles catch my eye as well.) And it mainly shows sfw. You have to follow a small maze of links to get to nsfw, if you haven't searched for that specifically.

Mine is sci-fi/magic based. I hope that will interest you at least a little

This is one of the characters: www.furaffinity.net: Zayev ref sheet by Fell
My FA Not my art, but my character's name is Ichi-gou.

www.furaffinity.net: 'Pull up a chair. I'll tell you a story.' by Faint by SSJ3Mewtwo

www.furaffinity.net: 'The Stand-Off' by Croft by SSJ3Mewtwo (mildly NSFW, same reason as before)

www.furaffinity.net: 'Ichi-gou - The Flame Reaper' by Croft by SSJ3Mewtwo
I'mma give you the best advice I can, for any negative situation where you are not on fire.

I only just got a ref sheet a couple days ago finally, but my sona is an extraterrestrial turtle with a sci-fi background. In the Star Trek universe, he's even a tenured starship captain. He's a map turtle, fitting for someone who maps the stars. He's my SFW sona as well. Not even sure if he's a he or a she, could never decide on just one.

His backstory is that a bunch of alien scientists were observing Earth during the Triassic period and studied several species. During a party, they all got drunk and said they should give "those weird ones with the shells, like, wings or something, it'd look hilarious". One of them actually did it, but released all of his attempts at genetic manipulation in the form of unhatched eggs in incubators, out an airlock once someone found out. And that's why there are several intelligent turtle species on the other side of the galaxy on several planets.

Banned
All of these are of my fursona, a bronze dragon cyborg. here is one i did some time ago

Don't have much to show for it right now (trying to break a really long hiatus/art block, so I mostly have old/unfinished stuff), but most of my stuff is centered around a sci-fi universe I took de-facto ownership of. Or it will be, when I start doing more finished work.
www.furaffinity.net: Big game hunter. by Not-Even
005 — Weasyl
Old image

I'm also pretty interested in finding more anthro sci-fi art, I've been keeping an eye out for it and it is pretty rare to find anthro artists that draw mostly sci-fi, military stuff is more common.
You might be interested in work by Altehra, Commisar-K or Sarspax,
FA: Not-Even Weasyl: Butt Ghost

Let's be real. What did you expect from someone with the pseudonym "Butt Ghost"?

This was a random doodle one day. For sci-fi I invest most of my creativity into aliens and mecha, my humanoid characters are usually comparatively plain when it comes to sci-fi styles. Banned
A recently finished piece I commissioned from Jennette Brown (aka sugarpoultry). Meet Patricia Ferguson. A capable woman of many talents and an ego to match, she's made a name for herself among the original Twelve as the go-to subject matter expert on all things mechanical, especially since their initial exposure to Trinity. Just don't expect her to give you the time of day if she thinks you're not pulling your weight.
Click to expand...

Technically all Sergal are trained as soldiers when young, per original canon.

Although Coma still has a lot of character development to deal with, he is well-trained in the arts of war nonetheless. I haven't finished designing his armor yet, but doing it right takes time. One story maintains canon, another later that removes the original canon "restrictions." Hmm, I love sci-fi, but I have no such characters now, unless you count inorganic creatures(made of stones, gems) as such.
So, I only draw Sonic fanart with it. I'm going to draw Shadow soon and I've recently drawn Bunnie Rabbot as furry. Thank you for sharing all your cool arts

Once in the long ago, I sketched but never finished this one. Maybe I'll finally give it a go! (Even though it looks surreal in sort of a neat way right now, lol) 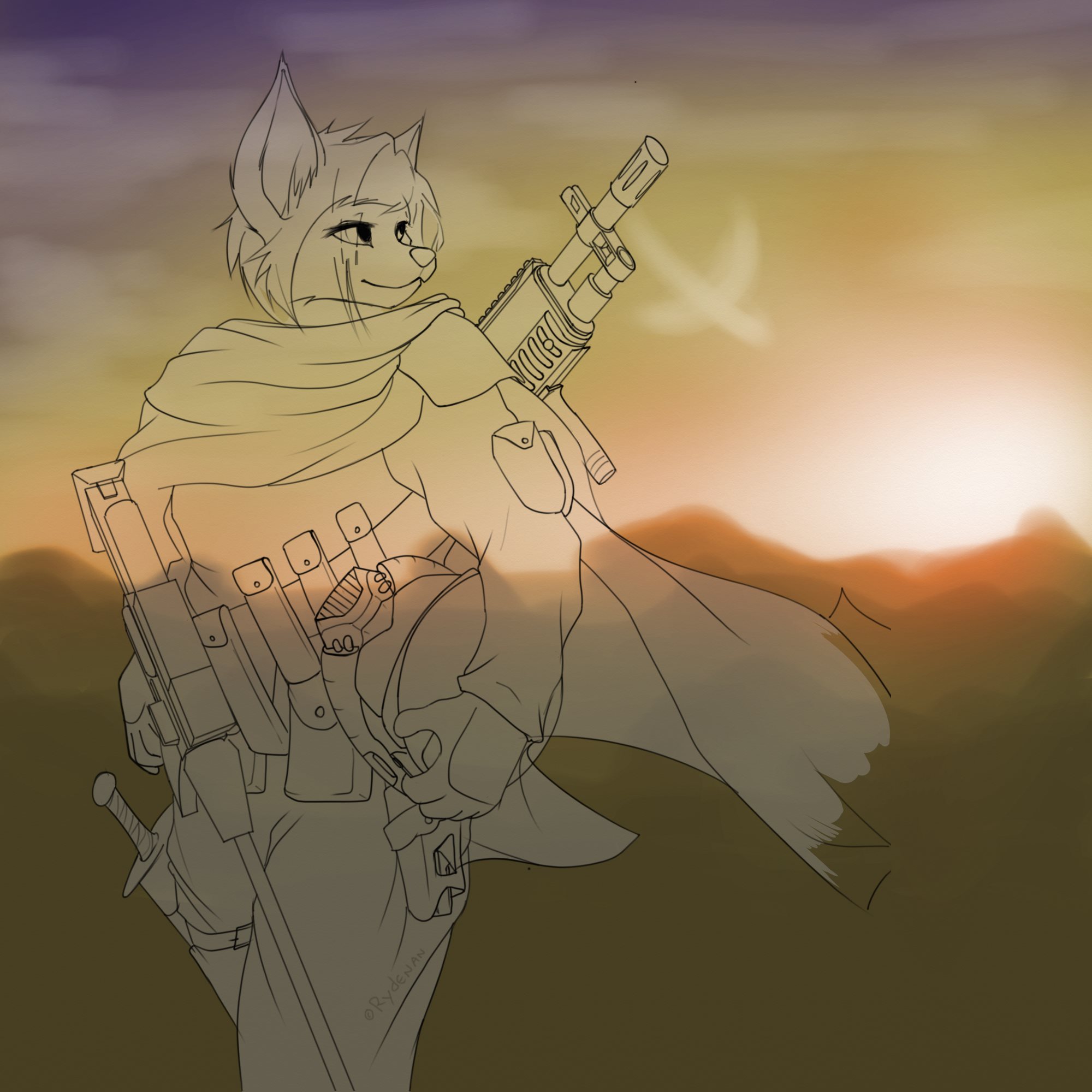 Also a fan of future tech furries! Agree with you, it seems a unfilled nitch within the fansom.

Here's a few I've saved over the last few weeks, but I didn't log the names of the artists... no slight is intended, and all credit goes to them Huh, on an unrelated note, I was gonna have a commission done of Simo in The Peace Corps, digging wells in another planet's version of Africa, and such, wearing a space suit...maybe not as exciting, but never saw furry art of this before.

(Simo is afraid of guns, and loud noises)
Click to expand...

Sounds like a surefire way to violate your own airspace lol.

Could be! Gotta be careful! Also, I like space suits, and form fitting stuff.
"Don't it make you feel alone, don't it make you wanna get right back home?" -Nick Cave
Read Simo & the Melon Thieves for spicy furry fun! New installments daily.
​ If you view full size you can see the targeting laser reflected in the raindrops. Awesome
Experience Badges by @Steelite
Optimist-for-Hire
Avitar by @Juden

Open_Mind said:
Also a fan of future tech furries! Agree with you, it seems a unfilled nitch within the fansom.

Here's a few I've saved over the last few weeks, but I didn't log the names of the artists... no slight is intended, and all credit goes to them

I'm quite positive that nearly all of these, if not all of them, were done by Strype.
Military fur, proudly serving Queen & Country since 2010.
--
Accounts on other sites:
DeviantART|FurAffinity|SpaceBattles
--​

I found a gallery specifically dedicated to sci-fi art.