TV Series From Our Childhood

Often-times cheesy, I thought the bot designs were cool. Fox Kids just had to pull a time switch and I never got to see what happened at the end, if there was any. Just as it was getting interesting to boot. Too bad the kid's name was Ikki or something (geez couldn't that be changed for dubbing, or was it just a running gag?). I lol'd at the referee's name: Mr. Referee.

There was another TV show on Fox Kids that I watched that was about this cave-kid and his converted-to-stone-but-still-talking-dad that became some sort of time-police-officer that had to get these... things back before they ruined the time-space-continuum. I didn't like that show that much, yet I watched it, all of it.

It was OK. Didn't get to watch that many episodes.

Batman was BIG in the 90s, so this was a big deal! I was fascinated that it took place in the future, with Bruce Wayne an old man and retired; and by the costume design, even with no jaw-line cut-out that I personally preferred.
But unlike EVERYONE else, I didn't really enjoy it. Like all animated Batman series of the time, they had this mature flair to them that I tried to like but couldn't. Just because it was TV-Y7 fv didn't mean I could fully grasp all the concepts. Mom and Grandma caught one episode (the one with the black goo chick) and were shocked/appalled/disgusted/pissed with BB. Today I understand why. ^^; 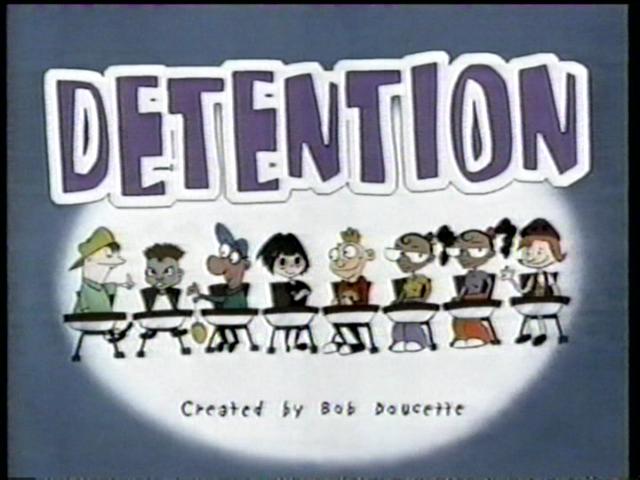 Initially, the art style wasn't to my liking, but it was a great show no less! â™ªDetention, uh, oh...â™ª

Dastardly and Muttley in their Flying Machines: The show that made me admire Erik Estrada (I thought he was, like the only man of Puerto-rican descent to make it in Hollywood). Mom recorded it for me and I watched and re-watched the bejeezus out of 'em. It also made me wanna be a police officer and admire full-flared Harley-Davidson motorcycles. Thankfully I out grew both of those things! Besides, the motorbikes were actually Kawasakis ^^.

Unknowingly, I became a Michael Landon fan. I would've watched the entire series, but there were so many episodes! That and the fact that it got too formulaic for my taste.
Speaking of Michael Landon...

Little House on the Prairie:

One of my family's favorite series. As a kid I thought I was making head-way into the series, but I later realized that I'd barely scratched the surface! 9 seasons! My family tells me that the last couple of seasons aren't as happy. If ever need to satisfy my curiosity and need to find out for myself, I know who has the complete series box-set.

It's a campy, low-budget Christian TV show, that I found enjoyable. Another one was Adventures In Dry Gulch, which was also campy and was showing its age, but filled with great life lessons and great songs at the end. The theme song wasn't that bad either. Too bad there aren't any good pics about it.

I have a question...
Did ANYBODY watch this/bought the LEGO or Nintendo merchandise?

Galidor: Defenders of the Outer Dimension:

It's hard to forget a name like 'Nick Bluetooth'. Lol.

ElectricBlue1989 said:
I'm looking for a series. It was a direct Teenage Mutant Ninja Turtles rip-off, featuring dinosaurs (not Dinosaucers!), with color-marked armored uniforms, underground lair, sweet armored van.
The setting is in a city that's run by anthropic dinosaurs. Think of it as a cross between TMNT and Swat Kats.
Click to expand...

I believe it's worthy of a double-post:

The Adventures of T Rex:

Here's the Intro:
[video=youtube;lA4o6WhJO-A]http://www.youtube.com/watch?v=lA4o6WhJO-A[/video]
With all the times the title comes up, I'm amazed that I didn't learn it, regardless that I saw it in Spanish!

Ed, Edd, n Eddy
Codename: Kids Next Door
Dragon Ball Z
Naruto (I got bored of watching it after 50 episodes)
and Bo-bo-bo-bo bo-bo... something like that. I used to love that show.
Don't Read This Signature!!!!!!!!!
You just had to read it, didn't you.

I always watched: Invader Zim, Ed Edd N' Eddy,Courage the Cowardly Dog, Dexter's Laboratory. I watched other things but these are the ones I remember the most. (I miss Courage the most ;_; and I think Invader Zim should have had a longer run.)
I guess I'm single again...

The retro TV... ALL THE RETRO TV. I never realized exactly how much TV I watched as a child until I started looking back on all the shows I used to watch regularly... and it only makes me want to watch them all over again. Some held up better than others...

For one, Wishbone is one of the best kids shows ever made. It taught me literature! Like, real literature! And I had no idea!

Kidsongs was cute, and the Biggles were in reality among the first furries in my life, though (again) I had no idea.

Someone mentioned 101 Dalmatians: The Series... it hasn't really held up as well as the first two I mentioned. But Lucky (in addittion to living with a pet dalmatian) helped provide much of the original basis for my fursona today.

I didn't watch SWAT Kats until I was a teenager and it was in reruns on Boomerang... but I got real hooked real fast.

Kratt's Creatures! The only Kratt show I really enjoyed... but man, that's been off air for YEARS now... the little song they used to play during the bumper for it, usually accompanied by a flight of birds... not the theme song but something else... it's been just outside of my complete memory for years now.

And here's one I found by accident on youTube recently...
[video=youtube;7cwMlfnd3io]http://www.youtube.com/watch?v=7cwMlfnd3io[/video]
Everybody's talkin' at me
I can't hear a word they're saying
Just driving around in Jon Voight's car
T

I'll think of the theme songs to Pepper Ann and Darkwing Duck often. Talespin and Rescue Rangers too. Chi-chi-chi CHIP AND DALE!!!
H livin' up in jersey fighting villains from above...

Ah, Angry Beavers was the best. I watched some Ren & Stimpy also, even though it was pretty terrifying as a little kid.

I vaugly remeber a show called Bonkers that I could in a way say I was obsessed with, dont know where it went but I havnt seen it in a long long time
[SIGPIC][/SIGPIC]Cast into Oblivion, Where will you hide now...

I was a total wuss as a kid. This show used to scare the shit outta me. It had evil masks, disembodied hands, and hellish dummies. Seriously, looking back on that now...its really hammy.

DarthLeopard said:
I vaugly remeber a show called Bonkers that I could in a way say I was obsessed with, dont know where it went but I havnt seen it in a long long time
Click to expand...

That would be this one:
[video=youtube;8qR8bw013m8]http://www.youtube.com/watch?v=8qR8bw013m8[/video]
Everybody's talkin' at me
I can't hear a word they're saying
Just driving around in Jon Voight's car

This thread is positively dripping in nostalgia and fond memories of my childhood.

I was surprised no one mentioned the X-Men cartoon which had the best opening theme in the history of cartoon shows (imo).

And I can't remember if the show came first or the cereal, but Pro-Stars was a personal favourite of mine since it showcased Michael Jordan, Wayne Gretzky and Bo Jackson doing good, although ridiculous, deeds. I mean, really, how many times can a basketball hoop be intricately involved in solving a crime? Slam dunk!

BlueStreak98 said:
That would be this
Click to expand...


XD omg yes!!
[SIGPIC][/SIGPIC]Cast into Oblivion, Where will you hide now...

Our time has come, our shadow fades into the darkness, we extinguish our flames, and vanish with the smoke.
T

Thanks so much BlueStreak for posting the Belle opening. That's something I'd COMPLETELY forgotten about and haven't seen in about 15 years..."it's as if I heard it for the very first time."

I remember watching this show on channel 3 called Candle Cove, Oh that ship always saying you must go inside! (Joke)
Ok I got a good list here! for real

Tigercougar said:
Thanks so much BlueStreak for posting the Belle opening. That's something I'd COMPLETELY forgotten about and haven't seen in about 15 years..."it's as if I heard it for the very first time."
Click to expand...

Hehe yeah, I'd forgotten about it until I happened across it on YouTube. And then I remembered pretty much everything about it immediately, because I watched it a LOT!

Pappyland got me into drawing and arting, at least for a while. It was on TLC, as I recall, back when it showed something besides weird reality shows.

Another PBS show I watched, albeit years later, was Between the Lions. I was a teenager and still tuning into that one!

Anyone remember Under The Umbrella Tree? Shown on Disney Channel in the States, though the show was originally Canadian.
Everybody's talkin' at me
I can't hear a word they're saying
Just driving around in Jon Voight's car

Butterflygoddess said:
Reboot was a favorite of mine. I love how it started off without much of a story arc but by season 3 was epic as all hell. Also, this is the best way to end a series: http://www.youtube.com/watch?v=lFKHBygDZMY
Click to expand...

They were able to take more risks in Season 3, after leaving ABC. As an adult, I appreciate all their little digs at the expense of ABC's Standards and Practices, which constantly forced them to cut bawdy jokes and examples of "imitable violence."


Skrappy said:
I also watched this kickass show called Fillmore!, but I don't know if anyone else remembers it.
Click to expand...

Of course! Fillmore was excellent.

I'm surprised none of you made emphasis on this show! While I only saw some episodes, I do remember being extremely disappointed with the Doberman, which at the time I thought were so cool, and thrilled when Muzzle (guess which one's Muzzle) was released upon the enemies!!
Click to expand...

This show was excellent! It was too young and too wonderful to die .

They also deserve mad props for having the cojones to do the "Son of Sonov" song.

A Mouse and His Child:
http://www.youtube.com/watch?v=ouPBM2SstDQ

From the studio that brought you Reboot--Beast Wars: Transformers:
http://www.youtube.com/watch?v=OZN-bIWxs3g
Last edited: Mar 2, 2013

Longetivity is my middle name

Virtually anything Cartoon Network showed before it changed it's logo to CN and canceled Toonami was a favorite of mine. (And let's not forget classic Adult Swim!)

I also loved Animaniacs, it was educational and funny, with lot's of hidden adult humor.
Can't touch this. Unless I let you touch this, and you have to be gentle too because "this" is pretty fragile. You know what? Never mind. All hands off this!
You must log in or register to reply here.
Share:
Facebook Twitter Reddit Pinterest Tumblr WhatsApp Email Share Link
Top