Hey! So, I know I have the capability to draw a lot of animal types, but I don't actually have any OCs or ideas for the more strange animal choices! I need some folks willing to let my use their characters as guinea pigs/ reference. You get free art and I get some refs to use when looking for commissions! Win win I say! Hit me up with some unique designs or animal choices!

EDIT: Specifically I'm looking for things like avians, repitles, aquatic, and fantasy types. Others are fine too!

'Cause sanity is boring

My guy is a dragon! Refsheet.bedlams.studio Thanks!
Reference Sheet

Does a monkey with a scar qualify as a stranger animal?
www.furaffinity.net: Rimna Profile Picture by Rimna <SFW

I have a werewolf character! Not the most unique but he can be drawn more monstrous should you so choose.

I'd like to request his classic werewolf style, so ignore the stuff on the left of his sheet
He makes up for his simple design by having a vivid personality. He's meant to be what a real werewolf would be like, so he's not all complex and magical and all that.
Last edited: Sep 11, 2017
Not that active here anymore... I do visit from time to time!
FA page | Toyhouse | DA

If you like I have a pastel style tiger (not the most unique haha) his name is marshmellow.

Thanks for the chance! Have a good one :3
M

I am a Jackalope Mockingbird hybrid
www.furaffinity.net: Mexia, my fursona by Kknutson

Life is too damn short. Don't waste your time on this Earth by worrying about what others think.
Do what you love, and love what you do. Live your own life, and be true to the person you know you are.

Oh - and smile once in a while. Soon or later you might not have teeth! well I got my sona here who is dragon, draw him if u want
*incoherent snarling*

My girfriend has a unique species, I dont see much of her species getting drawn.
Name:Keerai Ainnea
Sex: Female
Gender: Non-binary (They/Them)
Species: Thylacine or Tasmanian Tiger
Age: 18
Height: 5’1”
Approx Weight: 180 (curvy)
Nationality: AMERICAN!!!! (the worst country ever)
Languages: English and ASL
Occupation: Police Officer
Relationships with other characters: Best friend – Zeke Evans | Boyfriend - Foxxo
Sexual Orientation: Pansexual
Dom/Sub Scale! (10 to -10)[how dom or sub is the character?] -5
Likes: Music and video games
Dislikes (note not just limited to the ones listed): Nazis (I will punch a Nazi in the face every chance I get)
External Appearance - Appearance feature: Fur is light brown, while eyes are dark brown. Hair is long, dark brown wavy hair dyed red on the tips, Kinda curvy like wide hips and a nice ass and little smaller waist. Got those thicc thighs. Piercings: eyebrow, nose (not septum), industrial ear, and 6 other ear. Tattoos: (on left wrist), (on her left ankle), big cherry blossom on her back and right shoulder, a pawprint on her side for every dog she owned
Personality: Kind and shy, tries to always do the right thing but always fucks up, wants everyone to like them. Isn’t kind to herself.
Disabilities, Diseases, and other related things: Depression, anxiety, dependent personality disorder, and depersonalization disorder
Quirky Habits: Is always checking the time
Favorite Color: Purple/Teal
Comments on the Character (mainly the logic behind their creation): I guess like a better version of who I am but still very similar to me
Modes of Transportation: Car or motorcycle
Clothing: Sporty clothes like sports bra, tank tops, and shorts; always with a flannel shirt either as a jacket or around her waist
Inventory: Headphones, sheet music (either blank or when she’s sight reading a new piece), computer, and a pack of gum (trying to stop smoking but failing and always has a backup pack of cigs on her), and two or three pocket knives
Special Abilities: She’s really good with animals 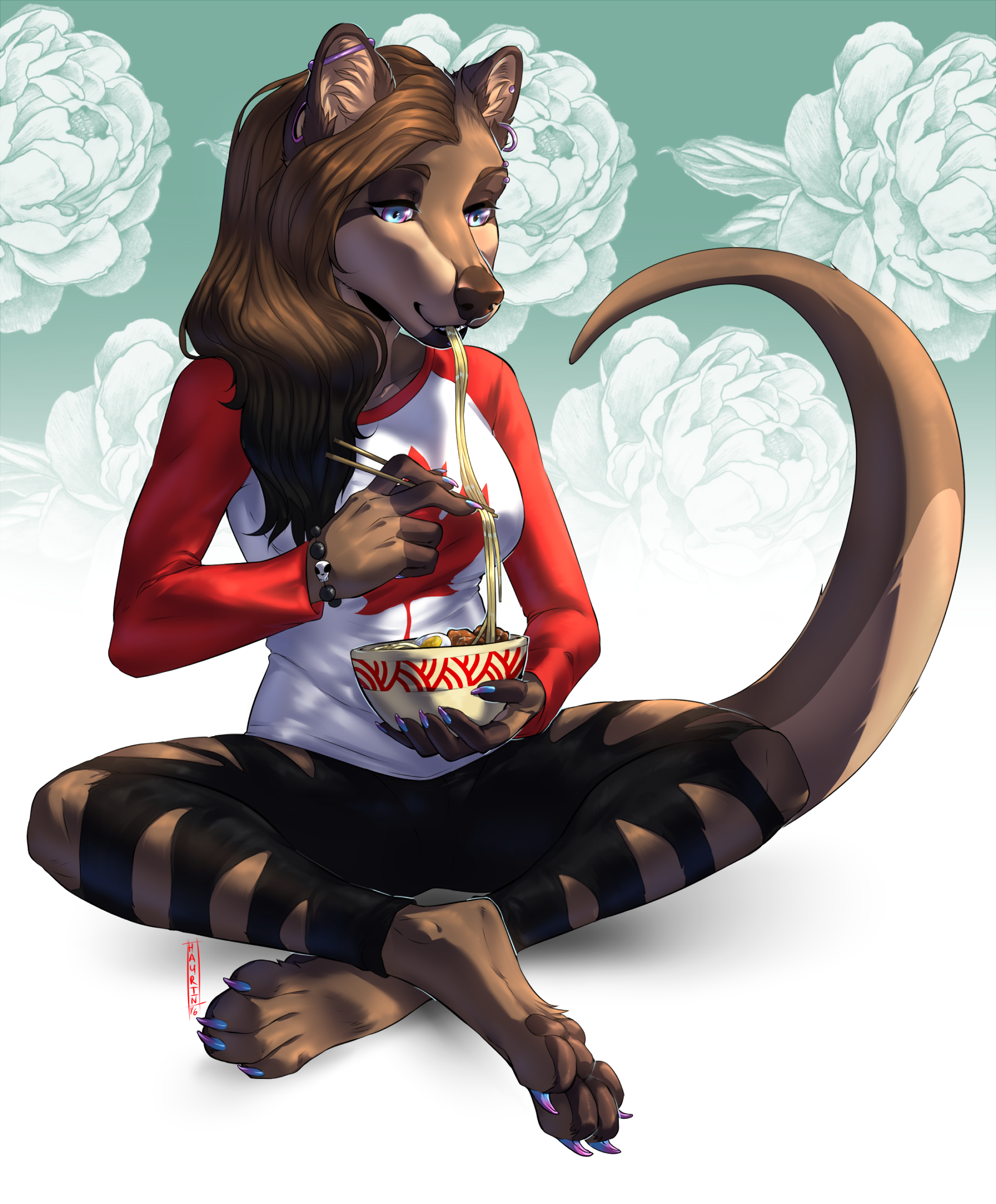 This is how she plans to look like, the species I mean.
W

Oh! You could draw me if ya want! >w< I'd love to see Crevan in your art style! Here's a link to my latest drawing of him. OwO
www.furaffinity.net: ISH CREVAN... AGAIN by WolfoxeCrevan

Does a nightstalker qualify as a stranger animal?

www.furaffinity.net: Pumpkin Spice Reference by DaniellaAntoinette How about a snail?

King Emperor of stealing your girl

Here's my character, what kind of reptile is he? Even I'm not sure!
www.furaffinity.net: Another casual pic by TheNorthernStorm

Would a golden brushtail possum count as a strange animal?

Mine is a dragon, I have yet to get a ref sheet but I have a few artworks and a decent description here; Userpage of danje -- Fur Affinity [dot] net

I should add that the mouth has 5 "lip spikes", 2 on each side and one in the front as seen in the most recent artwork.
Introvert, weeb, gamer, reader, avid music fan and all that good stuff.
You can contact me through
Discord (PM for username)
Twitter

Id love art of any of my characters! c: Yeah, I'm not drawing a character who's concept is "social justice is fake and bad and this dumb female just wants something to complain about" especially not for free. Sorry.
Phoenix || 30 || He/they || Nonbinary

snailienz said:
Yeah, I'm not drawing a character who's concept is "social justice is fake and bad and this dumb female just wants something to complain about" especially not for free. Sorry.
Click to expand...