Borderlands the Pre-Sequel. It's okay. Borderlands overall is a meh series for me, I love the combat but hate the forced humor.

Well, in Astral Chain we got a second opportunity to review files in the otherwise-unaccessible "Police Database". A few of them are still locked under a 4-digit passcode though. The previous level was a blast, featuring very climactic fights against [REDACTED] except that afterwards there's a plot twist. A huge one, y'know, on the order of "there's actually two villains and you were just involved in a battle between them". The good news is that you were found by a few friends (who both happen to recently be declared wanted persons by the government) and given a new base of operations down in [REDACTED] with all the same functional amenities as the old one. The bad news? You've been legally declared dead after [REDACTED], and there's a high change you'll have to take down [REDACTED] in a climactic duel.

("Redacted" is a reference to the police files you got to access, where certain names have been wiped from the otherwise-intact records.)

I just bought a game called "Not For Broadcast" on PC (windows only). It's similar to papers please if you ever played that game. It sounds boring at first, you are a producer type guy for a british news channel and you control what gets broadcasted. It starts simple where you only have to choose the feed where people are talking but it gets more complicated and nerve wracking. You have to censor swears, change feeds, avoid interference and static, play ads, and other things all at the same time. It's great fun!
cringe

I wish I still had that!

I've been playing a lot of Cities: Skylines lately. That game is very addictive.

Been playing a lot of Diablo 2 lately. I can never escape the urge to collect more pants in this game <: 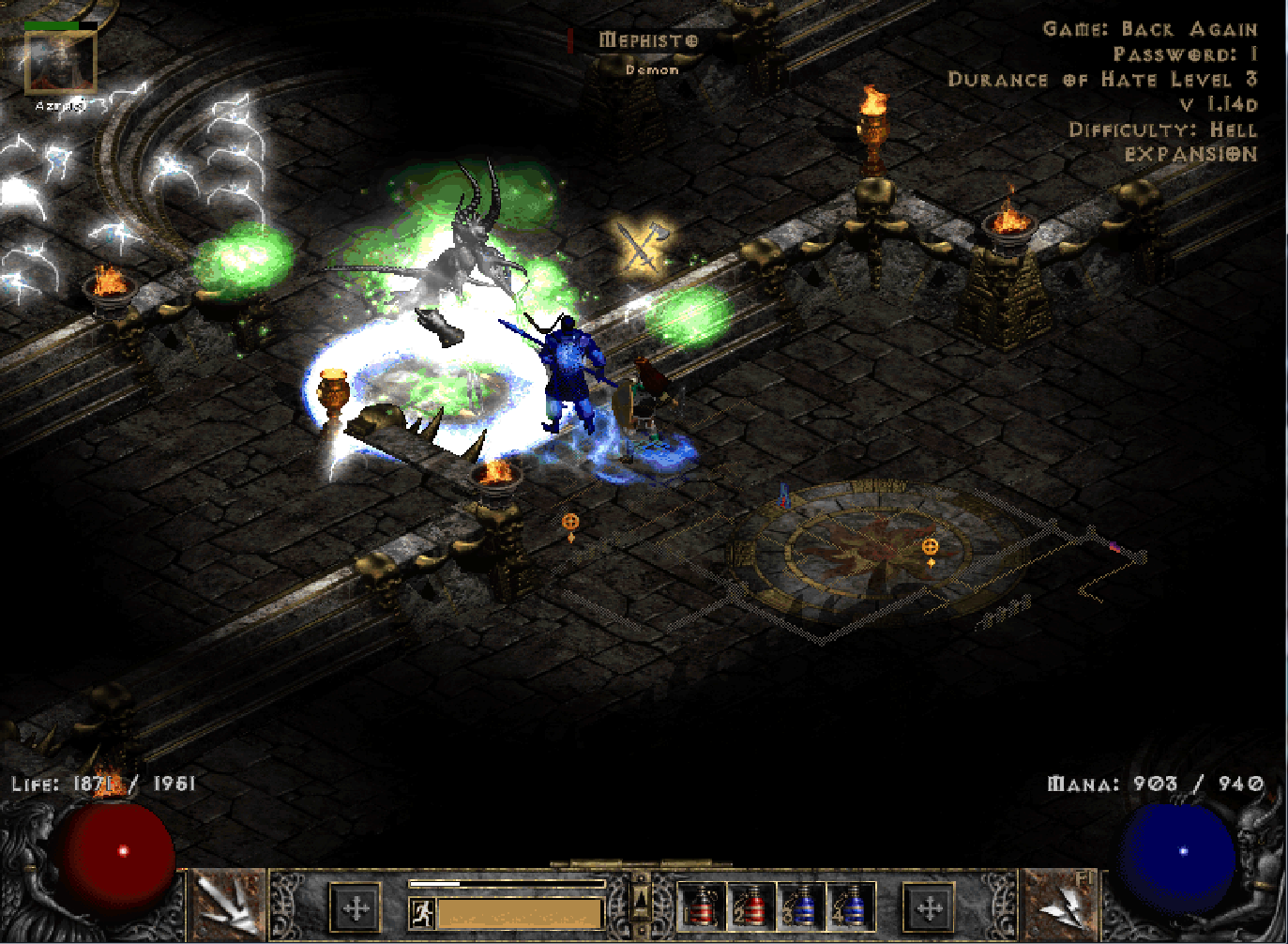 Mostly been playing Mount and Blade: Bannerlord. Sandbox games ftw. Sadly, I can't seem to get my laptop to run it once I put mods in, and I can't play without the mods. ;-; This means no playing it at work, and now that my desktop's RAM is shipped off to be replaced I can't play it at home unless I can somehow get it running on my laptop.

As a bit of a side game at work I've been playing Monster Sanctuary, but it reminds me just how much I detest platformer mechanics. I'm not good at them and it's very frustrating to spend 10-15 minutes getting a jump just right so that I can access a thing, or to have to backtrack once I have the ability to access something (especially considering some of these things are unmarked and far from the portals). Ree. If there was a cheat to just fly through levels I absolutely would use it (I looked, there isn't - yet). I like the rest of the game's mechanics, but the platforming is ruining it for me.

Last but not least, I decided to try out Guild Wars 2. Been itching for a social game lately, but I'm not far enough in to know if I will like it for long enough to get involved in a guild. This one will also be hard for me to play at work just for the sheer fact that I could have to get up at any time, which means no getting involved in anything that needs my undivided attention. I'm sure my laptop could run it, so maybe I could just do simple tasks if I decide to make it a long term thing. So far it's both fun and annoying. No mount makes charr a slow beast, and I'm not sure when I get one.
Avatar art by Kostino. Full commission can be seen here.

Been playing some BL3, it's easy to just run farms and throw on some music to relax

Yeah, so I'm the spoiled brat that already had a VR headset ready to go... thing is, between work and just how unused to standing up while gaming I've become as of the last month (and I insist on playing most VR games standing up unless the game's designed ONLY for sitting down), I get about 2-3 hours of progress maximum a day. (Quite possible that I'm just overdoing it honestly.) Sooooo this might take me until Saturday or Sunday to finish, if I can manage to burst-play on one of those days.

Is it weird that I went for ammo capacity in my weapons as my top priority? (Well, okay, I got the burst-fire thing for the pistol as my third total upgrade, but I didn't have the pulse gun yet! Pulse gun capacity is my next planned resin upgrade.)


Gonna have to get back to Vampire the Masquerade Redemption after all is said and done... swore I'd finish that before Bloodlines 2 drops (I already beat Bloodlines 1 again). Got a pretty good-sized to-do list beyond that.
Is it really hoarding if you're not at the top tiers of resources?

So much 7 days to die, utterly addicted to that game, really good mix of exploration, building and combat, and just the right amount of spooks to keep you on your toes.

Really looking forward to see what else they do to it while its still in development! In my opinion, genuinely best zombie survival/ general survival game I have ever played or heard of thus far.
Self Employed artist (FA Page)
Admin of UKFUR forum (yep, resurrecting it!)
Casual Youtuber
Just about everywhere as Olivitree, feel free to seek me out and drop me a message!​

The US release of the obscure ps2 gadget racers
Have no fear, your furry godfather is here

Elder Scrolls Oblivion. I started watching this one dude play it on YouTube and got excited to play it again. Currently I have e khajit character bc of course I do

Totally not a vampire

honeyglitter said:
Elder Scrolls Oblivion. I started watching this one dude play it on YouTube and got excited to play it again. Currently I have e khajit character bc of course I do
Click to expand...

Oh hey, I just started playing that too! My favorite thing to do is try to play the game with a wildly impractical build. Last time I was a simple alchemist/merchant who mostly ran away from their enemies, and this time I'm doing a Mysticism-only run!
"Not to be dramatic, but I'm not super sure you have a soul."

Just finished and am about to start replaying Final Fantasy 7 Remake.

Bam look at that bacon sizzle!

I'm playing Animal Crossing New Horizons and Conan Exiles because I like to build things.
I did not make my avatar art!!
P

Biscayne said:
Borderlands the Pre-Sequel. It's okay. Borderlands overall is a meh series for me, I love the combat but hate the forced humor.
Click to expand...

URh. the presequel. ive been forcing myself to like it. the one reason i play is that you can be frigging claptrap
P

Banned
I've been playing a lotta castle crashers remastered. It's a great trip to waaay back to when i was 10 years old on my xbox 360 and i couldn't even beat the game.

i do very little video game stuff but when i do it's usually S.T.A.L.K.E.R: Call of Pripyat

hologrammaton said:
i do very little video game stuff but when i do it's usually S.T.A.L.K.E.R: Call of Pripyat

get out of here, stalker.

pilgrimfromoblivion said:
URh. the presequel. ive been forcing myself to like it. the one reason i play is that you can be frigging claptrap
Click to expand...

Y'know, I really need to finish up my demo play of Trials of Mana since it's releasing this week. Best feature so far: when one of your three chosen characters joins the party, you can choose between hearing a summary of their backstory (as in the original) or playing it yourself (as you did when selecting your main character)!

Loading times are a little sad, but the environments themselves look great and have a lot of newly added nooks and secrets to find things in. The fade-ins/outs around cutscene moments are a bit slow though.