Eternal Sunshine of the Spotless Mind.

Man, I totally forgot how good it was.
I like to make music and stuff.

Fun movie. I really liked it, though the pacing seemed a bit extreme. Final fight was awesome though.

The World's End with writer commentary.
I AM NO LONGER A MOD, PLEASE DO NOT MESSAGE ME ABOUT THREAD APPROVALS​

Akira, it was so crazy and awesome, I couldn't believe what I had seen

I recently watched both Percy Jackson movies, as well as the Underworld Quadrilogy.
http://psnprofiles.com/KidBoruto89
My Anime List | My Video Game Collection

Its on Netflix, please do yourself a favor and watch this movie.

A few nights ago I watched Sofia Coppola's 'Marie Antoinette' and John Cameron Mitchell's 'Hedwig and the Angry Inch'. I'd seen both of them before but was sharing with friends who enjoyed each film for different reasons.
"Life is made up of challenges that cannot be solved but only accepted" - Roger Ebert​

Mother Teresa - In the Name of God's Poor (Spanish version):

Not the right pic, but close. Serously, this movie was amazing. With a bigger budget and better editing, it could've been a contender. Yet the crappy DVD quality and made-for TV nature made it feel like a film of the 1970s.

The Measure of a Man:

Not what everybody was expecting. It's a nice movie, but it's more of a homage to a man than anything else. It didn't help that the stickler for detail in me pointed out every thing that was period incorrect. Not out loud, mind you.


Frozen
It wasn't what I was expected. In the end I thought it was cool.


Kitsune Cross said:
Akira, it was so crazy and awesome, I couldn't believe what I had seen
Click to expand...

I missed that because the cable was broken, literally! Argh!!!

Finally got round to watching Rio (love animation), was pretty good and pretty d'awww worthy.
"The only me is me. Are you sure the only you is you?"

Transformers 3
It sucked and rocked at the same time.

Saga said:
One does not simply, fuq with arshes nei.
Click to expand...

RedSavage;5210967 said:
Do not condescend me you presumptuous excuse of a human being.
Click to expand...

Just watched Mass Effect paragon lost, well i tried to, its appalling. Thought the animation was a bit naff compared to others i've seen plus the character designs are horrendous, i dont think they've ever seen a Krogan. Not to mention they dont even know anything about the game considering they are using shotguns and heavy pistols which for some reason are firing like a sub machine gun -_-
"The only me is me. Are you sure the only you is you?"

Just watched Robin hood (disney's version) man its been so long since I seen it.

I watched Frozen in 3D, was aight. Looked great, story was eh, songs were pretty corny... but overall fine.
"Life is made up of challenges that cannot be solved but only accepted" - Roger Ebert​

Brother Bear 2, better that i expected plus feely
"The only me is me. Are you sure the only you is you?"

Brute Force (1947).I have to say, this is the first prison movie I actually liked, and it was black and white to boot.

Saw that this was going to be on toonami the other night. I said fuck that and drove to the japanese mall in Los Angeles. I need to go back to Little Tokyo more often, that place is rad and everyone seems really nice. d.batty said:
Saw that this was going to be on toonami the other night. I said fuck that and drove to the japanese mall in Los Angeles. I need to go back to Little Tokyo more often, that place is rad and everyone seems really nice.
Click to expand...

DANK. When it comes to great movies Summar Wars is one of those. Dat badass grandma.
[SIGPIC][/SIGPIC]
​

benignBiotic said:
DANK. When it comes to great movies Summar Wars is one of those. Dat badass grandma.
Click to expand...

I cried, bad. I had to witness the same thing when my g-ma passed with my uncle furiously trying to revive her when I was 17.

The Cross and the Switchblade: 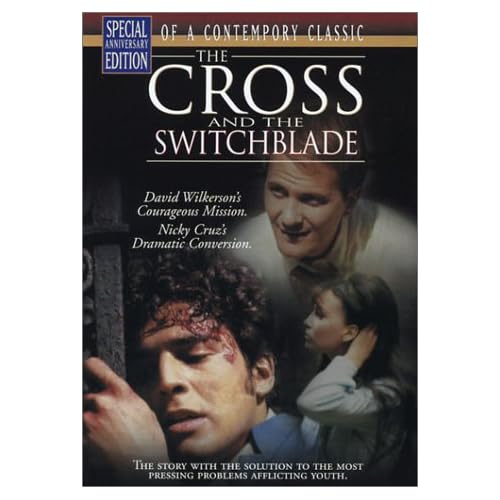 I expected more from this movie. It's not perfect. You don't feel the change that the main protagonist has been making around him even if they tell you otherwise. The on-again/off-again heroin addict didn't help. It is a fascinating trip back to early-1970s New York.
I am interested in the special feature that shows one of the real people whose movie is based on.