Guardians of the Galaxy

Fuck. Yes. A refreshing change to all the GRRRR GRITTY PAST DARK HERO GRRRR NO FUN ALLOWED superhero movies recently. Funny, entertaining, trope-destroying, and that's before even mentioning the wonderful Rocket.

King of Kawaii; That Token Femboy

Sharknado
Howl 'havoc!' and let slip the wolves of war
​

vaerjo;4915494 said:
Anybody remotely interesting is mad in some way or another.
Click to expand...

Kellie Gator;5208157 said:
They don't own shit, steal their waifus and watch the world burn!
Click to expand...

Banned
Guardiens Of The Galaxy
I should stop making feline puns, but they're so puuurrrrfect. *buh dum tss*

Non-stop (A very good movie)
I don't believe in swag. I believe in awesomeness.

I knew next to nothing about this film, aside that when it came out, just about all my classmates have seen it and annoyed me with their "martian voices".
I'm... not sure what to think of it. It was pretty crazy. Maybe the commercials made it seem longer than it was.

For Greater Glory: The True Story of Cristiada

"A chronicle of the Cristeros War (1926-1929), which was touched off by a rebellion against the Mexican governmentâ€™s attempt to secularize the country[...]" (Full synopsis here).

If somene told me that such an event actually took place in Mexico, I would've never believed them. The thought of that it actually happened is a scary one.

Naturally, this amazingly casted movie has a bittersweet ending, but to those that aren't gonna do further reesearch afterwards, it fails to tie up some lose ends, though it tries.

It was good. Kinda lost momentum after two-thirds of the way in, but it's really well-written. To quote a line from it:

"Everybody trusts God on a good day with $20 in their pocket".

I went to the movies and saw Lucy last weekend.

Honestly, pretty good movie, I enjoyed watching it and it definitely had a lot of badass moment in it. Although throughout the movie you don't really feel as though she's ever in danger of being killed, since she's essentially an woman with aimbot, wall hacks, full awareness of her surroundings (360 sight), no sense of fear or pain, etc. as well as telekinesis, control over tv and basic radio waves; the list goes on. What I really enjoyed was that there isn't really a plot, it's not predictable, and really admire that in a movie. Honestly, if there's a plot then 99% of the time you can follow any basic movie steretype and it will more than likely come true, this movie doesn't really do that. There were a few moment in the movie when I was like "Just kill them, you've killed everyone else so why spare the mob leader who will more than likely come after you later." it makes no logical sense, really. Overall I did enjoy the movie though, really action packed with a lot of bad ass moments.
​

Saw Lucy too and... It was pretty damn stupid. There were a LOT of plotholes and facepalm-worthy moments throughout and the ending was quite the pinnacle of acid trips... But it was fun. Not extraordinary nor insultingly bad as long as you accept they are totally wrong with the 10% thing, but it was still fun.

Also, the ending was kinda ruined on me when I realized a pigeon was sitting on the far right corner of the screen and I was wondering for 5 good minutes about why there was a bird inside of the cinema and why it didn't fly away at all (or maybe it was a fat rat).

Guardians of the Galaxy, it was actually really good and I liked it a lot
Icon by Productmur: https://www.furaffinity.net/user/productmur

Guardians of the Galaxy. I went in with a lot of hype because everything about the movie screamed "YOU WILL LOVE THIS AND YOU REALLY NEED THIS IN YOUR LIFE RIGHT NOW"

Man, it totally lived up to my stupidly high hype. Fuckin hell what an amazing flick.

Saw The Desolation of Smaug last night. While any part with Smaug in it was pretty awesome - because dragon - these new films feel dumbed down and trying so hard to be exciting, with utterly ridiculous action sequences. It's like most of the dwarf characters are comedy sidekicks.

Guardians of the Galaxy. It was pretty good. I had a lot of fun watching that and I really like Groot for some reason lol If anyone stuck around at the end I had a good laugh as the WORSE movie in Marvel's library: Howard the Duck lol....although I think I was the only one that got it *sighs*

Teenage Mutant Ninja Turtles. Kinda...snuck in to see that one lol Wasn't too bad, but Megan Fox can't act to save her life! The 4 cgi turtles could act better than her and they were all one note! The action was hard to follow at times and Shredder....I kept getting Transformers flashbacks with his suit.
C

Devil. Like, the ending kinda sucks, but the rest of the film is pretty good.
​

Twylyght said:
Guardians of the Galaxy. It was pretty good. I had a lot of fun watching that and I really like Groot for some reason lol If anyone stuck around at the end I had a good laugh as the WORSE movie in Marvel's library: Howard the Duck lol....although I think I was the only one that got it *sighs*
Click to expand...

As an 80s nut, I learned who he is. I can't believe I stuck around the end credits only to see him.
But I totally agree with you on Guardians of the Galaxy. While Rocket Raccoon was full of win, Groot -who I seriously underestimated- oftentimes stole the show.

The only reasons why I saw this was because it was made in the '80s (I can't believe it's 30 years old) and because it has Emilio Estevez. What a trip. And a not so good one at that, but that's because this is not my type of movie.

The story of a man who made copies of the Scriptures in English, for the public. The problem was that this was not sanctioned by the Church for a number of reasons and doing so was considered heresy. This was during the time where you could get burned alive for just reading "heretic" material. Let's just say the ending is of the bittersweet variety.
It's relatively low-budget, and all the music seems to have been composed by the same keyboard, but the scenery as well as how it's written helps it.

The Book of Daniel: 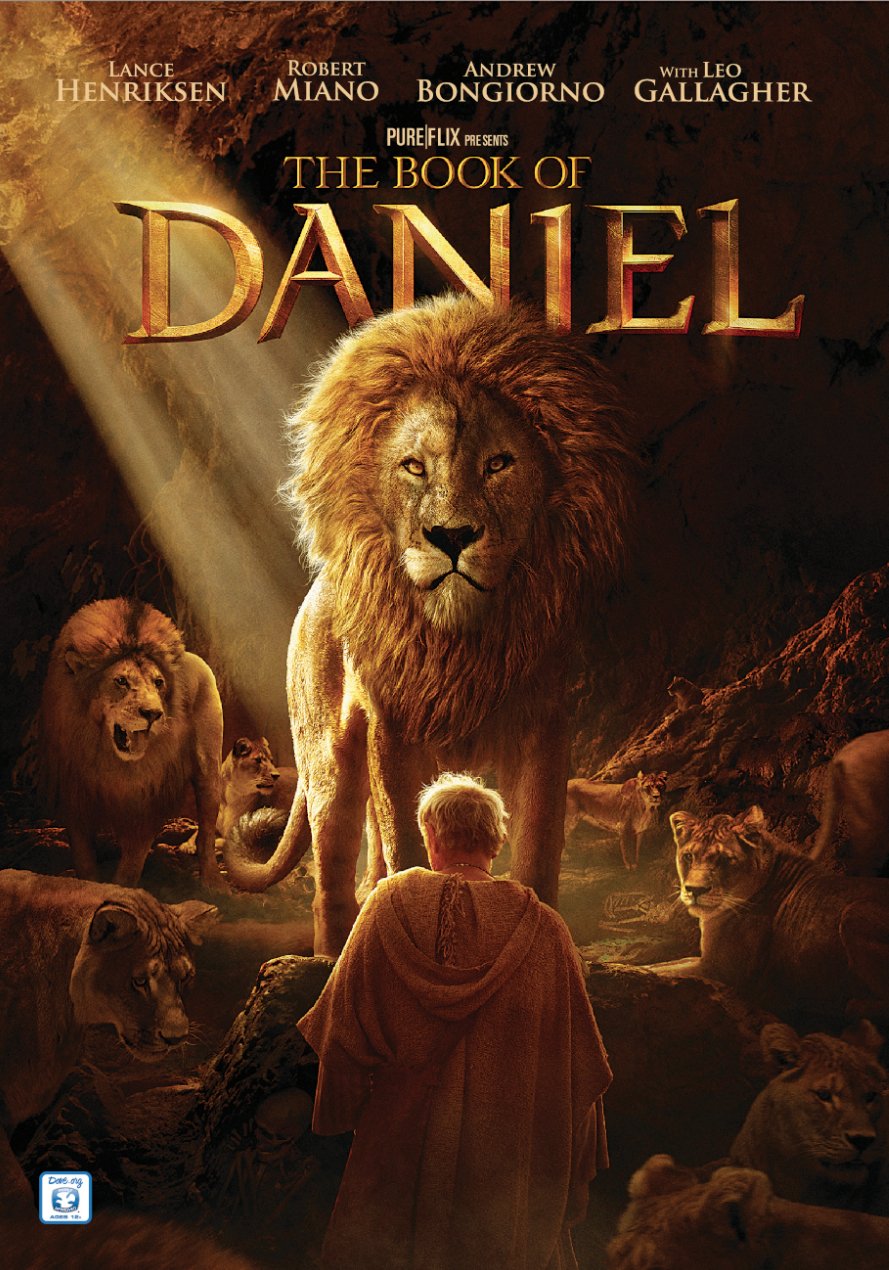 Ignore the cheesy DVD artwork. It was actually good. Well written.
It has some cheesy CGI, but it doesn't detract from the movie. Though you may feel they talk a bit too much. I did like how the story is divided. I also liked that it ends with something that goes beyond the lion's den part of Daniel's story.

The very last movie I watched was Divergent.

A far better movie that I watched a few days ago though was The Pit.

It's about a 12 year old sociopathic sexual predator who is constantly bullied by everyone around him. His only friend is his teddy bear that talks to him and tells him what to do. Little do the people around him know though is that the little boy has a secret. Deep in the woods he has found a pit full of trapped troll like monsters which he has adopted as his pets. He tries to take care of them by bringing them raw meat, but being only twelve years old he soon runs out of money to do this. What ever is he to do? His friends need to eat after all and the only things left available are the "bad people" who bullied him. Hmmmmm ;3c
Every time a vampire says he doesn't believe in lycanthropes, a werewolf bursts into flames.

So this movie is basically trying to go on the whole 22 Jump Street bandwagon, which I haven't seen but I imagine I'll be able to tolerate it better than 21 Jump Street. Anyway, this movie pretty much sucks as a theater movie. Drunk and on TV, sure, it's got some funny bits, and the actions pretty good. I pretty much kept hitting my head against the wall when I got home though, thinking "Why did I pay $13 to see this stupid movie." So yeah, don't go out and see it, kids.

On a side note, why the hell is that terrible no good bad day movie PG? Also, Steve Carrell, what the hell are you doing? You're a good actor, and this is a Nickelodeon-quality live action movie. Jesus, I hope you needed that paycheck pretty badly...
Come away, come away, death,
And in sad cypress let me be laid;
Fly away, fly away, breath;
I am slain by a fair cruel maid.

Guardians of the Galaxy - 3/5.
Current icon/avatar commissioned to Juden.

i just watched the Spongebob Squarepants movie and uh,

The Pirate Fairy (disney) It was okay...
Follow me to the land of Tumblr!