Why album art is important/what were the first albums you got for yourself...

So I'm 'dancing' in my living room, jamming to 'Phish' (thank God for living outside city noise limits), and I'm feeling nostalgic about music. I remember the first albums I picked out; I was around 5 or so years old (about 1996), and my mother took me to the record store at Salisbury Mall, and told me to pick out two CDs, and said that she would buy them for me. You know what those two CDs were? 'Steve Miller Band Greatest Hits 1974-1978', and 'Elvis Presley's Greatest Hits'. You know why I picked those two CDs? Because the album art sucked me in, for whatever reason. As far as I know, I had never listened to Steve Miller or Elvis and yet, just from the album art I decided that I had to have those two CDs. It's kinda funny, really; my mother knew the Elvis songs, and whenever I played Elvis's CD, she would dance to 'Hound Dog', but didn't really know the Steve Miller Songs and yet, I listen to Steve Miller far more than the Elvis songs. Hell, even now I feel the urge to jam to 'Jungle Love', but I know I shouldn't since I'm trying to make a thread (all good things in all good time.)

So, FAF, what were the first albums you picked out, and what memories do you have of them?
Last edited: Dec 21, 2013
What does Redd Foxx say?

"...There is always a big future in computer maintenance." -National Lampoon's 'Deteriorata', 1972

The first album that got me really into music was "Abby Road" by The Beatles...

Been a Beatle freak ever since.
V

The first cd I ever owned was the Lion King 2 soundtrack.
Which had nothing to do with album art, and everything to do with the fact that I just liked the songs from it.

I don't think album art has ever influenced my decision to buy a record from a band.
If anything, I already liked the band, or the movie / game / whatever that the soundtrack came from.
If I was debating between two albums from the same band, then I start previewing songs with those preview things they had at the stores, or I would just wait, entirely.
Moved primarily to [Tumblr]
and occasionally the [Weasyl forums].

Album art has never really influenced my purchasing choices, but I still adore good or creative cover art. And among my favorites being the cover art of the first album I bought. Got it at 7 years old and it took me three months allowance. My mom wanted me to get a Garth Brooks album originally, but wasn't unhappy when my grandma brought me home clutching a Master of Puppets LP (an LP is a vinyl record fyi for those to young to be familiar with them) (my decision to buy it having been settled by hearing The Thing that Should Not Be at a friend's house. Ironically, she had the LP herself but never listened to metal around me until after she thought I was alright to listen to it, my buying MoP kinda forced the issue. My grandpa however was NOT pleased.).

Most of the really cool fantasy art was my thing and I loved the album covers as much
as the art itself.

So Graceful and Phallic

Banned
I remember in second grade after Christmas a lot of the kids had gotten CD Walkmans as presents, me included, and they were all listening to Aaron Carter and Christina Aguilera CDs, and I was like fuck that, and had asked my dad to get me this because "Shot In The Dark" was my favorite song.

EDIT: Also this was in rural Virginia, so the teachers nearly had an aneurysm when they saw me with the case. Good times.
Last edited: Dec 22, 2013

Sylox said:
"Now die Earthlings, die to make your god cum!!!â€ he roared gripping his throbbing shaft, murring as he did.
Click to expand...

I listened to the radio for years and years, but one of the first CD's I got was from Slipknot, and another was Devildriver, followed by Fear Factory.
I sold my soul to the devil

Among the first CDs I got were American Idiot by Green Day and Futures by Jimmy Eat World.
I have no idea which I got first. They were presents, so I didn't pick them out, but I loved them all the same.
Album art has never been the deciding factor in whether I should buy an album, but it certainly is a nice bonus.
I do pick CDs up for 99 cents based on the art/band name/song titles from time to time, but I usually don't like them. It's more just for fun and to get myself listening to different music.

The first CD I actually picked out may have been Joe Satriani's Surfing with the Alien, but again I'm not sure.
I like to make music and stuff.

Album art almost never makes a difference to what I buy, but there was one album that I picked up purely on impulse - partly because I liked the cover, partly because the artist had done a song with another artist I liked (though I wasn't familiar with any of the rest of his work.) BT - This Binary Universe.

Other than that, nice cover art is just a bonus, particularly if they end up selling posters of it.
I do art-type stuff.

I don't remember the first album I bought for myself, it was so long ago, but some of the best albums I got purely because of the art were

Symphony X - Iconoclast. This is probably my all time fave album.

My musical tastes when I was little were all directly influenced my an older cousin who was "so in the know yo" (I never said that and neither did he but it was the 90's and feels RIGHT).

So I got Infest by Papa Roach and Godsmack by Godsmack. The latter is still my favorite band to this day, and the former turned into a generic radio rock band :[

Though Powerwolf got me to listen by having an awesome name. Had to check out a band that would name themselves that

Conker said:
Though Powerwolf got me to listen by having an awesome name. Had to check out a band that would name themselves that
Click to expand...

Sigh. That's what got me into Fleet Foxes, too.

I am nothing if not predictable.
I do art-type stuff.

Cervid with a Smile

The first CD I ever owned was Aquarium, the debut album from Aqua. It was littered with hits of the 90s, including Doctor Jones, Candyman and, of course, Barbie Girl.

gorgonops said:
Sigh. That's what got me into Fleet Foxes, too.

I am nothing if not predictable.
Click to expand...

Well, Powerwolf are fucking amazing so it was a good marketing ploy in that it appealed to my inner stupidity

My first album that i bought with my own money was The Marshall Mathers LP by Eminem when I was 8. Parents were not a fan and give it to my friend who lived across from me, just ended up going to his house.
​ Conker said:
My musical tastes when I was little were all directly influenced my an older cousin who was "so in the know yo" (I never said that and neither did he but it was the 90's and feels RIGHT).

So I got Infest by Papa Roach and Godsmack by Godsmack. The latter is still my favorite band to this day, and the former turned into a generic radio rock band :[

Though Powerwolf got me to listen by having an awesome name. Had to check out a band that would name themselves that
Click to expand...

I love infest by papa roach but the album art... >.< damn I hate cockroaches, it's cool anyway

One of the first albums I purchased was Muse's "Black Holes and Revelations"
Really all of Muse's cover artwork is fantastic. I especially love "The Resistance" what with all the rainbow stained glass and such.
Life is not a matter of holding good cards, but sometimes, playing a poor hand well. -â€‹Jack London

Bought this with my own money at the local Spec*s music store: 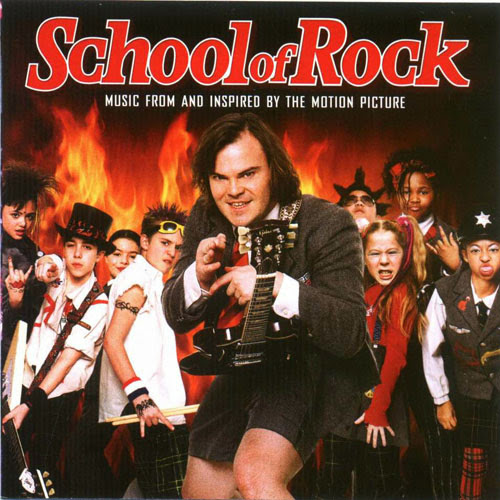 A fun, fun album. It had original, made-for-movie songs as well as great dialogue bits from the movie.


About the album art part, I actually looked at the album art and judged if I would get in trouble at home because of it.
Even went as far as putting up a huge sticker over the Dead or Alive - Evolution - The Hits album art front and rear because while the music flat-out ruled, the art was downright creepy.

That said, I've also bought CDs with lame-ass album art, just because I liked the songs. The art does grow on you, though.


As a side note, I miss Spec*s. They actually carried a decent variety of music. That's where I scanned the CDs to listen to the free samples (when said machines worked) before I bought 'em or not. There's only one left in my entire country and it's a shell of it's former self.

I'm technically buying my first album this week ("Kudos to You" by Presidents of the United States of America); every cd I've listened to belonged to someone else (mostly my dad).

These together are the first two albums I listened to in full when I was 10: