I am the Demolition Man

Earlier this year, I got inspired and wanted to practice some writing, and ended up writing a 3 page short story thing, more like an excerpt of a scene from something larger. I started to edit that first draft for the next few days, but it started to feel like I wasn't really making any progress. Felt like I was replacing clunky sentences with other clunky sentences, having trouble just coming up with any good sentences. Thought I'd post it anyways just for some advice and opinions. 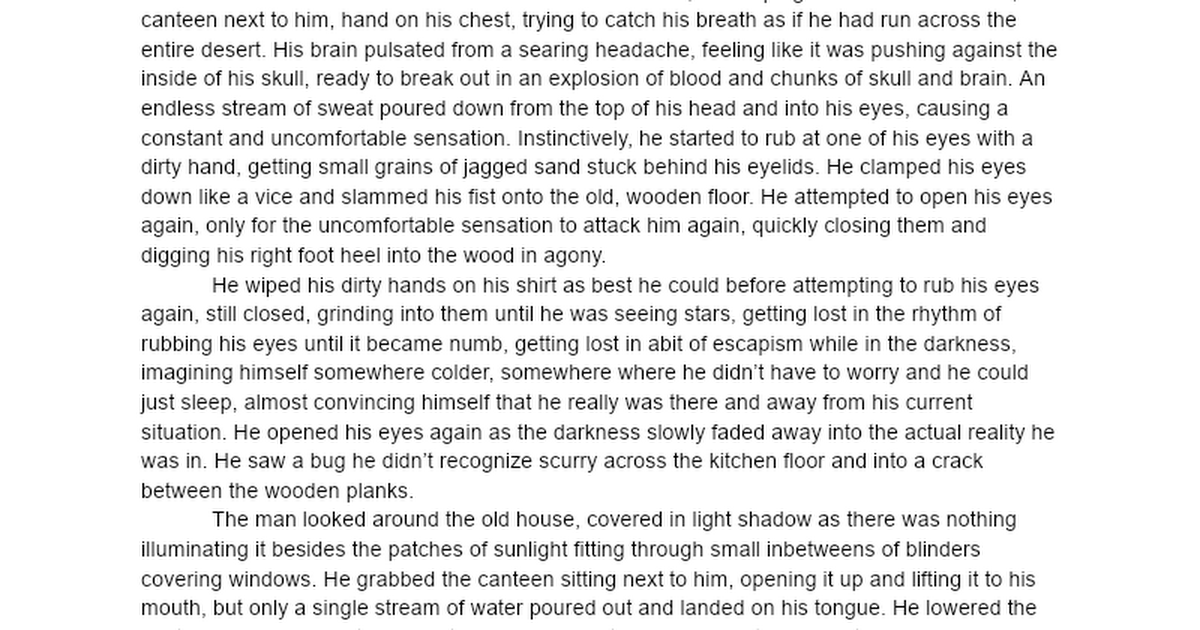 Pickaxe The man sat on the floor of an abandoned kitchen, back up against a row of shelves, canteen next to him, hand on his chest, trying to catch his breath as if he had run across the entire desert. His brain pulsated from a searing headache, feeling like it was pushing against the inside of...

I'd say this story is pretty good! Despite some grammatical errors, and some minor errors of the spelling, I'd say it's pretty good! Throughout the story, I will mention that some of the lines tend to repeat themselves, ex, "His brain pulsated from a searing headache, feeling like it was pushing against the inside of his skull, ready to break out in an explosion of blood and chunks of skull and brain." I feel some words can be replaced, modified, or removed, as some tend to re-state what was already pointed out. Secondly, I'd like to point out the attention to detail. The detailing is pretty good, though there are some instances where it may tend to prolong the actions of what one is doing, and it usually makes the reader uninterested if it is constantly repeated again and again. The description about the man at the beginning is quite good, but it tends to prolong after a while, making it repetitive and monotonous for those who may seek further adaptation of the story. Lastly, I'd like to bring the resounding conflict on the story. I would say that it is pretty good, and that it tends to have some good aspect, such as the looming, imminent danger than tends to grow ever more dangerous within the passing second, rather than just blatantly murdering him from the start. It is well-rounded in that regard, giving the overall meaning a plausible cover that keeps the reader guessing. And a small bonus was that you gave the story a bad end, which isn't common nowadays. The fact that salvation and hope are finite, ever so dwindling and ripped away in an instant makes this one to read, as most stories would have a good ending, which may seem a bit....cliche in some's eyes. Overall, pretty good story, minus the restating facts and other issues. Keep up the good work, for it looked promising!

As above I think it does have a few pieces that could be condensed or swapped around, and a lot of your lines are run-on sentences. Breaking up your sentences might be a good idea.