I have now is a dinosaure.

My computer die on me June 11 , the mother board die and did not go to the bios to load.

I was having problem with the com, but did not know what was it, then my second HD was no longer show. I manage to backup my book mark and my furry folder on a USB key. I try to reboot, but the computer stop. No bip, no video signal, nothing.

The ram are ok, the HD seem ok since when I boot I can feel it.

So its the motherboard that die

No pictures since it isn't much to see as its basically a 5 year old Dell laptop that's been upgraded over the years. Runs like a champ though.

This week I will see how it turn out. It need a power supply, a battery for the motherboard, a HD to install the OS, I still got 2 gig of ram, still got my video card and the old HDs. Don't know if the motherboard is good or not.

If not I will have to wait and see in august due to a problem with the landlord.
E

I throwed away most of the laptops and a buncha stationaries i had sitting around, instead i got myself this thing added to my system: I have an 8.5lb ASUS Laptop (great arm workout carrying that daily with its massive charging cord and plenty of other items). My lifestyle unfortunately couldn't support lugging a desktop everywhere, so I decided to upgrade my cheapo Costco lappy.

“Discovery is dangerous... but so is life. A man unwilling to take risk is doomed never to learn, never to grow, never to live.” - House Harkonnen
S

That room looks like it's surrounded by 4 garage doors

“Discovery is dangerous... but so is life. A man unwilling to take risk is doomed never to learn, never to grow, never to live.” - House Harkonnen
S

This bothers me way more than it should

I'm only a minor alcoholic

This is my machine, not much but it does the 4 main things I need to do. Play gta iv, MSTS, CSGO and the pokies
Dont mind me, just waiting for the train

My battlestation is a hackintosh (a pc built and rigged to run OSX)! his name is Ambrose. 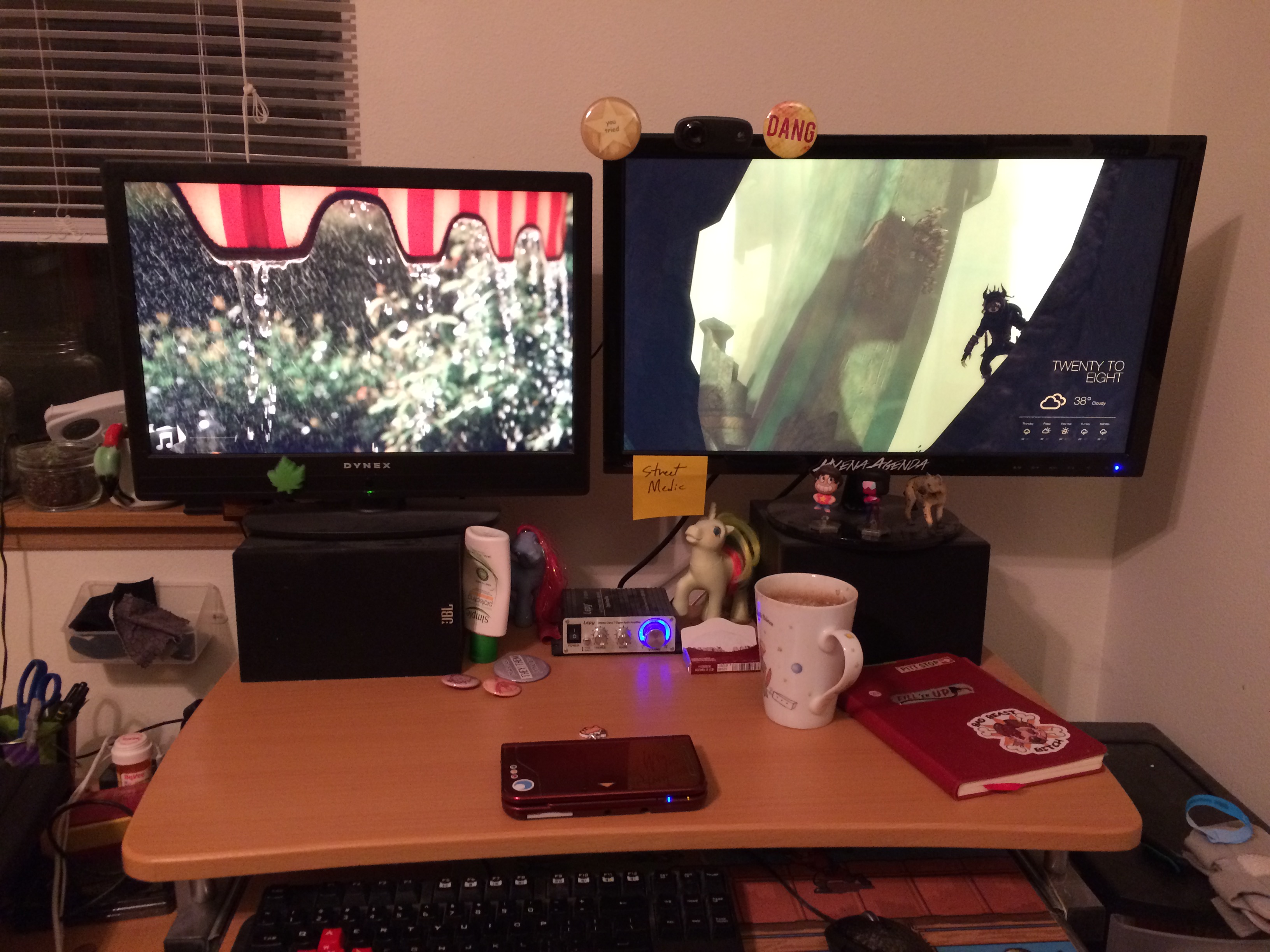 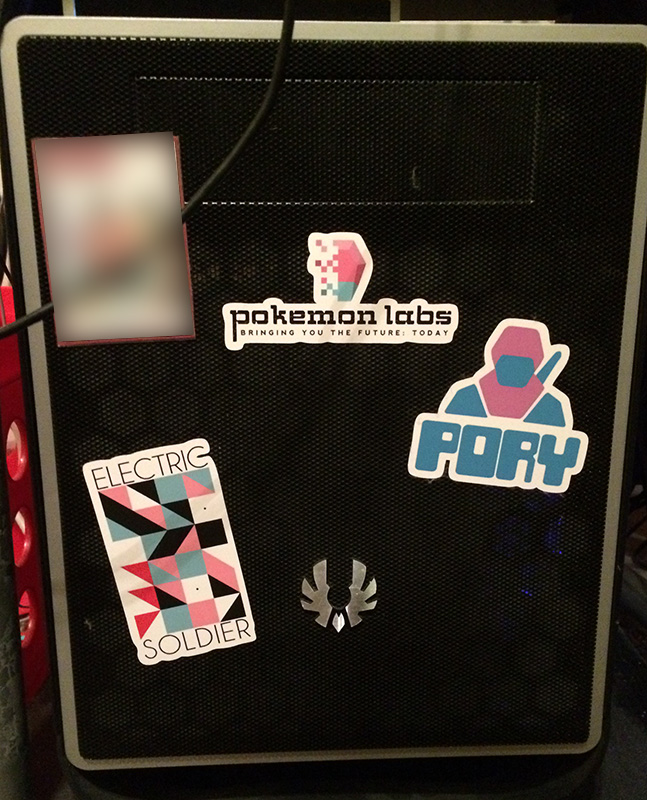 I ... might have named him after a porygon i have in one of my pokemon games.

took me literally a week to get all the low-level stuff working so he would boot, but i've had him for about two years now and he's extremely stable.

Maybe this one would be better,

Upgrading your RAM probably isn't going to be your best option... you're running an i5-4600 but you only have a GTX 650; you should match that i5 with a better GPU with performance like the GTX 960/AMD R9 380, these are older cards, their newer generation cards are the RX 470 and the GTX 1060

3rd gen ipod touch (don't have pc). I use neighbor's wi-fi because here internet is expensive and I think he doesn't even use internet so whatever

My computer is a libreboot thinkpad x200 running trisquel gnu/linux-libre.
Whatever you do, do it all for the glory of Kek~

My workstation/gaming PC with a i5 4690k overclocked to 4.2ghz at 1.18 volts with a Antec AIO unit on top of it I also have 2 1tb hdds and one 3tb hdd and a 500gh hdd in a hotswap bay and a 270gb ssd for the boot drive. It also has 16gb of ram and a 8gb reference AMD Radeon RX 480 as the main GPU and a Sappire Radeon R7 240 that has no display hooked up to it and does calculations for a program called Folding@Home. All of it is powered by a Corsair 750watt 80+ bronze PSU and I'm using a Asrock Z97 Extreme 4 motherboard.
(Will update with pics when I get the chance to compress the immages to be less then 1mb in size)

Also I'm GLAD I bought this case (Cooler Master Elite 130). First it was merely aesthetic, but also due the shape, it has a mucb better gravity center. I mean, that's the best place I could place in my room... Since I also use a sketchbook on my desk.

I built the PC with my brother on late September. It was my 1st built. My brother has built quite a few for a decade, but I think it was his first mini-ITX.

I bought one of the ram sticks and the HDD two months later. I'm kinda regretful for not buying a modular PSU... Kinda a pain cleaning my PC. Should had spent just a few more bucks.

I reseached everything on: SoloTodo, a site that compares component prices from all stores of a few South american countries; a couple of FB art groups; LinusTechTips' forum and YouTube channel. Before I didn't even know about compatibilities of each piece, and I knew it was easy to learn. My brother and brother in law merely helped me on saving my budget a bit when I asked for help afterwards.

Am I happy with this? FUCK YES! At first I was afraid it wasn't going to be enough, but those PC gamers surely have elitist perspectives. It wasn't cheap after all! I just wanted a good PC for 3D rendering and drawing, and don't upgrade for years (maybe only the GPU if I make 3D an income).

Redout is the only modern game I have atm. It runs at 60fps half of the time with all settings max. The worst is like 20fps, but that's only like 1% of the time.

So yeah! Long live my PC.
What are social skills? I'd show you my setup but it's a little messy My current desktop setup. It changes often, sometimes I sit on the couch.

Nvidia GTX960M
Intel Core i7-6700HQ CPU @ 2.60 GHz
8 GB Ram (expandable)
1TB Storage
And 64 bit Windows 10 Home
I LOVE HUGS
I also own a discord server, we're looking for some more active members. We have about 70 members at the moment. It's just pretty fun and social. Here's the link: Discord - Free voice and text chat for gamers