If you have been around and/or seen various characters, you must have noticed that many furries have unique skin/fur/feather(+etc) patterns (prescribed as 'fur patterns' below) on furry characters. Sometimes similar, and in much rare cases, even same!

Be it classic, unique or completely original(I mean exotic(?) ), I was kinda curious on how one could come up with such designs. And since I haven't noticed such thread around, I thought why not make one? OwO

So this time, if you won't mind, let's share how we've came up with our sonas' fur patterns!
Is it based off from real life animal(s) with your creativity?
Is it simply that of the real life counterpart(s)?
Is it your own unique design?
Or do you not really care and made it simple without the need to consider such?
Or others?

Plus, does the fur pattern correlate with other body parts(human hair, horns, teeth, claws, etc) to complete your designs?

+ I said 'sona' because it may or may not be too complicated to decide your words, but other characters than sonas are okay too UwU www.furaffinity.net
This is my sona, Terry!

Since the universe they live in is populated with the furry counterparts of known species(with or without human hair) in real life, Terry had to be so too!
In fact, they can switch fur patterns at will while being limited to real life cats' fur patterns.(Black, Mackerel, Calico, Tuxedo, Siamese, etcetc..) However, thanks to my laziness, my arts featuring my sona are mostly(overwhelmingly) featuring plain white fur >p<
Oh, the patterns on Terry's face is a facepaint, not a natural pattern per setups! And their paw pads and eyes color are always the same--pink and green respectively.
The human hair part actually has two tones when the fur is not plain white, while I can just remove human hair if I want, as well. This one is not really settled but my history says Terry's got human hair.
Other stuff not mentioned here are just typically expected appearances, except the assassin outfit!

I know it's highly likely to conflict with other characters around the world, but at the same time, since such design is kinda 'universal', I expect to be kept away from troubles and I as well is ready to respect other look-alikes as their own respectively. UwU
Okay, that's mine! How about you? OwO I tried to be as original as I could with my sona. With dragons, there are endless possibilities, considering they are primarily a fantasy based creature. I figured I would want something that was unusual, so I gave him cybernetic elements and patterns, that most people agree resembles the Tron genre. I also thought black, red, and silver would be interesting considering much of the high tech designs we see have blue and green colors, not red. Lastly, I thought it would be fun to add a power button symbol to his chest, and I think it goes very nicely with the his glowing red markings. I tend to design my animal characters to be more accurate to their real-life counterparts, with a few exceptions. I try to set them apart from other characters by giving them simple, but recognisable clothing, such as Milestone's yin-yang hoodie here. This doesn't apply to all of them, as some of them may have dyed fur/scales/feathers, or wear no clothing at all. Stephanie's are simplified translations of a skyrim character I used to use. Which were modded in, so I guess partially inspired? Constantine's were lifted directly from Iza, since they share a background bio-wise. Maelstrom is an Akhlut - a wolf/orca. Her natural form resembles a mermaid, but she frequently changes into a land-walking form. She has the body of an anthro wolf, with the tail and dorsal fin of an orca, and her body is marked black and white like an orca.

Well, for my main sona it is modeled directly off a tiger shark, specifically one I encountered in Fiji. My alt sona is a unique creature amalgamated with features from a variety of reptiles, namely monitor lizards, bush vipers, chameleons, and crocodilians. His pattern is directly based on the coloration and markings a green tree monitor I was sort of just going for what I liked, free-handing it. The final design for myself came out looking fairly standard for a raccoon, but that always suited me just fine.

Initially I wanted to give him body stripes, to make him go faster of course, but ended up with my current design and I'm very happy with it.
Last edited: Apr 2, 2021
Rascally rambunctious reticent raccoon romping reservedly 'round the requited racket. Guifrog said:
Blue poison frogs have these black spots but I place them on my character in way I think it fits and makes him look handsome

Guifrog said:
Blue poison frogs have these black spots but I place them on my character in a way I think it fits and makes him look handsome

Although half canine, is not a wolf.

He’s mostly like a raccoon, but since his tanuki half often give him more canine like appearance they say he’s a wolf.
The main difference is the stripe with the triple 7s and that his bandit mask is brown whiles having a reddish aura around his eyes.
Oh and the dice on his chest.

So he’s basically a raccoon with some extra added stuff because greed. 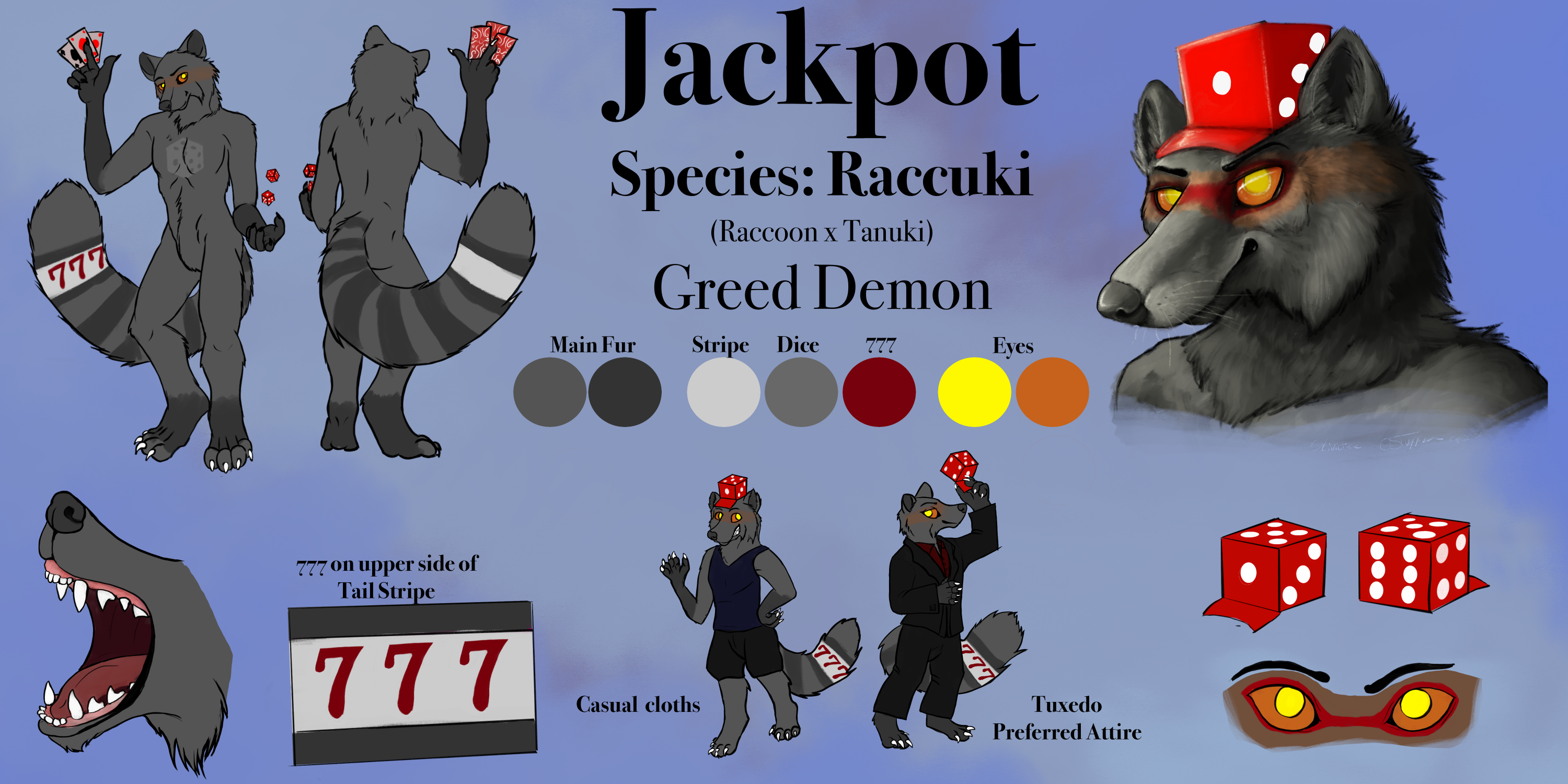 I base the fur patterns on real life animals very heavily, with just enough adjustments to make them fit a humanoid form nicely. Same with claws, horns and such, I keep the realistic coloration on them. I always add human-like hair, preferably long. The hair color should generally fit the overall design too, but I'm not overly strict here.

Most striped hyenas you see in photos are gray or at most grayish-yellow with dark stripes. I went for more saturated tan/yellow base, which actually does exist on real animals, but is a feature of the less-photographed Indian subspecies.

The patterns I use for my characters are basically simplified and more eye popping variants of their natural counter parts. I based the brown bands on Mae’s scales on the natural banding on a bearded dragon’s tail and back when they’re young, while adding a few more on the back of her legs to give her that ‘business in the front, party in the back’ kind of feel. As for Darby, my secondary deer sona, she still very much has the same natural brown coloration and patterns that white tail deer fur normally has, but there’s some darker colors on top of it, to vary the design and make it look a little more unique! i'm the natural colors of both my species
I'm a female willing submissive surti goat.

As my avatar might indicate, I just went with the typical red fox markings. The little diamond is to give my fursona something identifiable without being too flashy.
Last edited: Apr 21, 2021

"Based from existing" because tiger stripes are obviously not that unique. x3 Different because blue and glowy with the ability to change to different shades of blue.
Avatar art by Kostino. Full commission can be seen here.

I tried to keep my patterns as natural as I could, though they turned out to be closer to a donkey than a horse.
Do not hate the man that chooses a different path. Hate the one that forces you to theirs.

Faline's were based off of the Eye of Horus mixed in with other symbolism.
So I wouldn't say their original. I have a few adopts but I'm pretty sure their designs were based off of things too.
So I guess I'm pretty unoriginal.
My Icon Artist: CrystalBerry
My Banner Artist: Kirena-Kaya
My Forum Event: Sacrifice Your Sona
My RP Thread: [PBP] Welcome to VA-11 Hall-A
Other Links: About ~ Gallery ~ Moodboard ~ Blog ~ Spotify

Prepare for the collapse

My fursona has an uncommon, but naturally occurring, coloration in deer. He's designed entirely around that. *most* of my other characters have natural colors, too.
~ My FurAffinity Page ~

"The glass was rough like hands of man against the hands of time
And there was bloodstains in the red and there were teardrops in the blue
He said: It may not be the best but it's the best that I can do"​
D

there's... no... sun.
where our species comes from i mean.
we're all transparent.
since we're hairy though i 'guess' you guys would call that white.
I'm a stranger in a strange land.
Don't attempt to understand me.
I don't need your logic.
I am me and nothing else.